On October 4, 1957, the Soviet Union launched the earth’s first artificial satellite, Sputnik-1. The successful launch came as a shock to experts and citizens in the United States, who had hoped that the United States would accomplish this scientific advancement first. 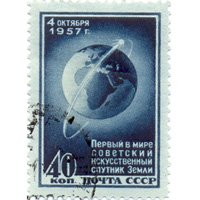 The fact that the Soviets were successful fed fears that the U.S. military had generally fallen behind in developing new technology. As a result, the launch of Sputnik served to intensify the arms race and raise Cold War tensions. During the 1950s, both the United States and the Soviet Union were working to develop new technology. Nazi Germany had been close to developing the world’s first intercontinental ballistic missile (ICBM) near the end of the Second World War, and German scientists aided research in both countries in the wake of that conflict. Both countries were also engaged in developing satellites as a part of a goal set by the International Council of Scientific Unions, which had called for the launch of satellite technology during late 1957 or 1958. Over the course of the decade, the United States tested several varieties of rockets and missiles, but all of these tests ended in failure.

The Soviet launch of the first Sputnik satellite was one accomplishment in a string of technological successes. Few in the United States had anticipated it, and even those who did were not aware of just how impressive it would be. At 184 pounds, the Russian satellite was much heavier than anything the United States was developing at the time, and its successful launch was quickly followed by the launch of two additional satellites, including one that carried a dog into space. Together, these orbited the earth every 90-minutes and created fear that the United States lagged far behind in technological capability. These concerns were compounded when the United States learned that the Soviet Union also tested the first intercontinental ballistic missile that year.

Although President Dwight Eisenhower had tried to downplay the importance of the Sputnik launch to the American people, he poured additional funds and resources into the space program in an effort to catch up. The U.S. Government suffered a severe setback in December of 1957 when its first artificial satellite, named Vanguard, exploded on the launch pad, serving as a very visible reminder of how much the country had yet to accomplish to be able to compete militarily with the Soviets. At last, on January 31, 1958, the United States succeeded in launching its first satellite, the Explorer. The Explorer was still slighter than Sputnik, but its launch sent it deeper into space. The Soviets responded with yet another launch, and the space race continued.

The success of Sputnik had a major impact on the Cold War and the United States. Fear that they had fallen behind led U.S. policymakers to accelerate space and weapons programs. In the late 1950s, Soviet Premier Nikita Khrushchev boasted about Soviet technological superiority and growing stockpiles of ICBMs, so the United States worked simultaneously to develop its own ICBMs to counter what it assumed was a growing stockpile of Soviet missiles directed against the United States. With both countries researching new technology, talk of creating a treaty banning nuclear testing faded away for several years. In this way, the launch of Sputnik fueled both the space race and the arms race, in addition to increasing Cold War tensions, as each country worked to prepare new methods of attacking the other. Eventually, lawmakers and political campaigners in the United States successfully exploited the fear of a “missile gap” developing between U.S. and Soviet nuclear arsenals in the 1960 presidential election, which brought John F. Kennedy to power over Eisenhower’s vice president, Richard Nixon. The Cuban Missile Crisis of 1962 served to remind both sides of the dangers of the weapons they were developing.