Tensions between the People’s Republic of China (PRC) and the Republic of China (ROC) in the 1950s resulted in armed conflict over strategic islands in the Taiwan Strait. On two separate occasions during the 1950s, the PRC bombed islands controlled by the ROC. The United States responded by actively intervening on behalf of the ROC. 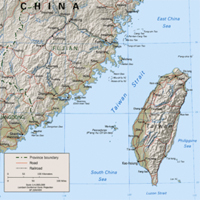 Map of the Taiwan Strait

The importance of the islands in the Taiwan Strait was rooted in their geographic proximity to China and Taiwan and their role in the Chinese Civil War. Jinmen (Quemoy), two miles from the mainland Chinese city of Xiamen, and Mazu, ten miles from the city of Fuzhou, are located approximately one hundred miles west of Taiwan. When the Nationalist Government of the ROC under Chiang Kai-shek recognized that it had lost control of mainland China during the Chinese Civil War, the officials and part of the Nationalist Army fled to the island of Taiwan, establishing troops on these two islands and the Dachen Islands further north. In the early 1950s, Chiang’s forces launched minor attacks from Jinmen and Mazu against the coast of mainland China. Leadership on both sides of the strait continued to view the islands as a potential launching pad for an ROC invasion to retake the Chinese mainland and had an interest in controlling the islands.

U.S. policy toward East Asia in the early Cold War contributed to the tensions in the Taiwan Strait. In late 1949 and early 1950, American officials were prepared to let PRC forces cross the Strait and defeat Chiang, but after the outbreak of the Korean War in June 1950, the United States sent its Seventh Fleet into the Taiwan Strait to prevent the Korean conflict from spreading south. The appearance of the Seventh Fleet angered the Chinese Communists, who transferred their troops poised for an invasion of Taiwan to the Korean front. This served to delay military conflict in the Strait until the United States withdrew its fleet after the Korean War.

Over the next few years, the U.S. Government took steps that allied it more firmly to the ROC Government on Taiwan. In 1954, the United States led the creation of the Southeast Asia Treaty Organization, which was designed to unify the region against the perceived Communist threat. Moreover, U.S. officials openly debated the possibility of signing a Mutual Defense Treaty with Chiang Kai-shek. The PRC viewed these developments as threats to its national security and regional leadership. In the interest of bolstering its strategic position in the Taiwan Strait, the PRC began to bombard Jinmen in September 1954, and soon expanded its targets to include Mazu and the Dachen Islands.

U.S. policymakers considered sending part of the U.S. fleet into the Strait. Discussions centered on whether this maneuver would reopen the Chinese Civil War and, if so, what effect that would have on U.S. security concerns in the region. U.S. policymakers did not want to be drawn into the conflict, but wanted the ROC to maintain control of the islands. The loss of Jinmen and Mazu to the People’s Republic might mean an irreparable blow to Nationalist Army morale and the legitimacy of the ROC regime on Taiwan. To assert its continued support of that regime, the United States signed the Mutual Defense Treaty with the ROC. Although the treaty did not commit the United States to defending the off-shore islands, it promised support if the ROC engaged in a broader conflict with the PRC. 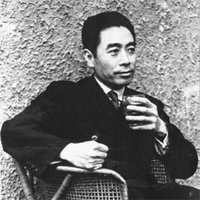 The situation in the Strait deteriorated in late 1954 and early 1955, prompting the U.S. Government to act. In January 1955, the U.S. Congress passed the “Formosa Resolution,” which gave President Eisenhower total authority to defend Taiwan and the off-shore islands. The U.S. Government then announced its determination to defend Taiwan against communist attack, although it did not specify the territory included within its defensive perimeter. In exchange for a private promise to defend Jinmen and Mazu, however, Chiang Kai-shek agreed to withdraw his troops from Dachen, which was strategically ambiguous and difficult to defend.

The Eisenhower Administration considered many options, ranging from convincing Chiang Kai-shek to give up the islands to employing nuclear weapons against the PRC. Before any of these options became necessary, at the Afro-Asian Conference in April 1955 in Bandung PRC Foreign Minister Zhou Enlai announced a desire to negotiate with the United States. The PRC’s sudden shift could have stemmed from pressure from the Soviet Union to ease tensions, concern about the very real possibility of war with the United States, or changes in internal politics. In September, 1955, the PRC and the United States began talks at Geneva to address the issue of repatriation of nationals, but also to discuss preventing the escalation of future conflicts.

Although there were good reasons for the PRC to stand down in 1955, it resumed its bombardment of Jinmen and Mazu in 1958. This time, the PRC took advantage of the fact that international attention was focused on U.S. intervention in Lebanon and barred ROC efforts to re-supply garrisons on the off-shore islands. The PRC also wanted to protest continued U.S. support of the ROC regime. Once again, President Eisenhower was concerned that the loss of the islands would hurt Nationalist morale and might be a precursor to the Communist conquest of Taiwan. The United States thus arranged to re-supply ROC garrisons on Jinmen and Mazu. This brought an abrupt end to the bombardment and eased the crisis. Eventually, the PRC and ROC came to an arrangement in which they shelled each other’s garrisons on alternate days. This continued for twenty years until the PRC and the United States normalized relations.