Secretary of State John Hay first articulated the concept of the “Open Door” in China in a series of notes in 1899–1900. These Open Door Notes aimed to secure international agreement to the U.S. policy of promoting equal opportunity for international trade and commerce in China, and respect for China’s administrative and territorial integrity. British and American policies toward China had long operated under similar principles, but once Hay put them into writing, the “Open Door” became the official U.S. policy towards the Far East in the first half of the 20th century. 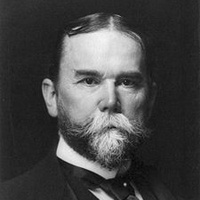 The idea behind the Open Door Notes originated with British and American China experts, Alfred E. Hippisley and William W. Rockhill. Both men believed that their countries’ economic interests in China would be best protected and promoted by a formal agreement among the European powers on the principle of maintaining an Open Door for trade and commercial activity. Under their influence, Secretary Hay sent the first of the Open Door Notes on September 6, 1899, to the other great powers that had an interest in China, including Great Britain, France, Russia, Germany, and Japan. These nations maintained significant physical and commercial presences in China, and were protective of their various spheres of influence and trading privileges there, and elsewhere in Asia.

Hay proposed a free, open market and equal trading opportunity for merchants of all nationalities operating in China, based in part on the most favored nation clauses already established in the Treaties of Wangxia and Tianjin. Hay argued that establishing equal access to commerce would benefit American traders and the U.S. economy, and hoped that the Open Door would also prevent disputes between the powers operating in China. For the United States, which held relatively little political clout and no territory in China, the principle of non-discrimination in commercial activity was particularly important. Hay called for each of the powers active in China to do away with economic advantages for their own citizens within their spheres of influence, and also suggested that the Chinese tariffs apply universally and be collected by the Chinese themselves. Although the other powers may not have agreed fully with these ideas, none openly opposed them. 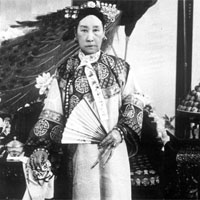 First, Hay sought the approval of the British and Japanese Governments, both of which considered the American suggestion to be in their interests, although both conditioned their acceptance of the terms on the agreement of all the powers involved. France followed the British and Japanese example. This British, Japanese, and French endorsement of Hay’s suggestion pressured Germany and Russia to adhere to the terms of the note, although Russia did so with so many caveats that it practically negated the Note’s central principles. Nevertheless, Hay declared that all the powers had accepted the ideas with responses that were “final and definitive.”

In 1900, however, internal events in China threatened the idea of the Open Door. An anti-foreign movement known as the Boxer Rebellion, named for the martial artists that led the movement, gathered strength, and began attacking foreign missionaries and Chinese converts to Christianity. With the backing of Empress Dowager Cixi (Tz’u Hsi) and the Imperial Army, the Boxer Rebellion turned into a violent conflict that claimed the lives of hundreds of foreign missionaries and thousands of Chinese nationals. As the Boxers descended upon Beijing, foreign nationals living in that city—including embassy staff—clustered together in the besieged foreign legations, and called upon their home governments for assistance. 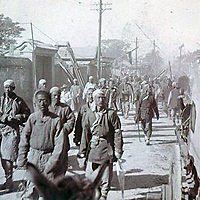 With foreign armies fighting their way from the Chinese coast to rescue their citizens in the capital, in some cases securing their own concessions and areas of special interest along the way, the principle of the Open Door seemed to be in grave danger. On July 3, 1900, Hay circulated another message to the foreign powers involved in China, this time noting the importance of respecting the “territorial and administrative integrity” of China. Although the goal was to prevent the powers from using the Boxer Rebellion as an excuse to carve China into individual colonies, the Open Door Circular requested no formal agreement or assurances from the other powers.

Together, the Open Door Notes served the important purpose of outlining U.S. policy toward China and expressing U.S. hopes for cooperation with the other foreign powers with a stake in the region. They were of lasting importance in U.S.-East Asian relations, and contributed to the idea of a Sino-American “special relationship.” However, because they were non-binding, the Notes did not prevent the United States—or any other power—from one day seeking Chinese territory, or acting in any way that was preferential to their own interests, even at the expense of the Chinese Government. Hay himself even briefly considered a seizure of Chinese territory, although he quickly rejected the idea. Although the Notes were not binding, Hay’s successors nonetheless adhered to the policy of maintaining the Open Door in China. The articulation of the Open Door policy represented the growing American interest and involvement in East Asia at the turn of the century.

Ironically, Hay articulated the Open Door policy at a time when the U.S. Government was doing everything in its power to close the door on Chinese immigration to the United States. This effectively stifled opportunities for Chinese merchants and workers in the United States. (See Chinese Immigration and the Chinese Exclusion Acts.)