The Treaty of Portsmouth formally ended the Russo-Japanese War of 1904–05. The negotiations took place in August in Portsmouth, New Hampshire, and were brokered in part by U.S. President Theodore Roosevelt. The final agreement was signed in September of 1905, and it affirmed the Japanese presence in south Manchuria and Korea and ceded the southern half of the island of Sakhalin to Japan. 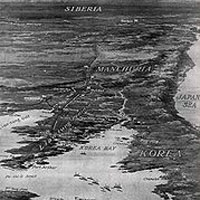 Photograph from the Russo-Japanese War

By 1904, Russia and Japan had endured several years of disputes over control of Manchuria. The Russians had entered the region during the Sino-Japanese War of 1894–95 and, along with Germany and France, was a part of the “Triple Intervention” that forced Japan to give up its demands for ports in South Manchuria and the Liaodong Peninsula in the wake of its victory in China. Instead, Russia moved into the area and took control of Port Arthur, a warm water port with strategic and commercial significance. A Japanese attempt to stage a coup in adjacent Korea was thwarted in part by the Russian presence in the region, and the two nations’ divergent interests appeared more and more likely to clash.

In 1904, the Japanese attacked the Russian fleet at Port Arthur before the formal declaration of war was received in Moscow, surprising the Russian navy and earning an early victory. Over the course of the next year, the two forces clashed in Korea and the Sea of Japan, with the Japanese scoring significant, but costly, victories. War casualties were high on both sides. At the battle over Mukden, the Russians lost 60,000 soldiers and the Japanese lost 41,000 soldiers. The military costs were high as well. A Russian fleet made the long trip from the Baltic Sea around Africa and India, only to be half destroyed by the Japanese upon its arrival in Northeast Asia. By 1905, the combination of these losses and the economic cost of financing the war led both countries to seek an end to the war. 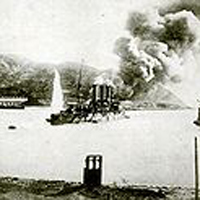 Photograph of Attack on Port Arthur

The Japanese asked U.S. President Roosevelt to negotiate a peace agreement, and representatives of the two nations met in Portsmouth, New Hampshire in 1905. For the sake of maintaining the balance of power and equal economic opportunity in the region, Roosevelt preferred that the war end on terms that left both Russia and Japan a role to play in Northeast China. Though excited by the Japanese military victories, Roosevelt worried about the consequences to American interests if Japan managed to drive Russia out entirely.

When negotiations reached an impasse, Roosevelt stepped in with the proposal that Russia “buy back” the northern part of Sakhalin from Japanese control. The Russians were adamant that they would not pay any amount of money, which would act as a disguised indemnity, when the territory ought to be theirs. After long internal debate, Japan eventually agreed to take only the southern half of the island, without any kind of payment. Theirs had not been a decisive enough victory to force the point.

The Treaty ultimately gave Japan control of Korea and much of South Manchuria, including Port Arthur and the railway that connected it with the rest of the region, along with the southern half of Sakhalin Island; Russian power was curtailed in the region, but it was not required to pay Japan’s war costs. Because neither nation was in a strong financial position to continue the war easily, both were forced to compromise in the terms of the peace. Still, the Japanese public felt they had won the war, and they considered the lack of an indemnity to be an affront. There was a brief outbreak of protests and rioting in Tokyo when the terms of the agreement were made public. Similarly, the Russian people were also dissatisfied, angry about giving up half of Sakhalin.

Individuals gathered to work out what became the Treaty of Portsmouth

Throughout the war and the peace talks, American public opinion largely sided with Japan. Believing that the Japanese were fighting a “just war” against Russian aggression, and that the island nation was equally committed to the Open Door and the territorial integrity of China, the American people were anxious to support it. This sense did not really change over the course of the negotiations, in spite of the best efforts of the Russian negotiator to improve the press coverage of his nation’s position. The final decision of the Japanese to forgo an indemnity only served to strengthen U.S. approval of Japan’s actions throughout the conflict. The anti-treaty and, at times, anti-American demonstrations in Tokyo that followed the ratification of the treaty caught many Americans off-guard.

The Treaty of Portsmouth marked the last real event in an era of U.S.-Japanese cooperation that began with the Meiji Restoration in 1868. Instead, competition between the two nations in the Pacific grew over the years that followed. Conversely, Japanese relations with Russia improved in the wake of the treaty. Although the actual importance of Roosevelt’s mediation and personal pressure on the leadership in Moscow and Tokyo to the final agreement is unclear, he won the Nobel Peace Prize for his efforts in moderating the talks and pushing toward peace.