The Opening to China Part I: the First Opium War, the United States, and the Treaty of Wangxia, 1839–1844

The Treaty of Wangxia (Wang-hsia) was the first formal treaty signed between the United States and China in 1844. It served as an American counterpart to the Anglo-Chinese Treaty of Nanjing that ended the First Opium War in 1842. 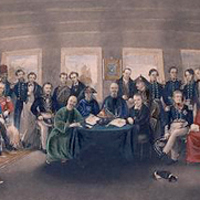 The Signing of the Treaty of Nanjing in 1842

The Opium War and these treaties were emblematic of an era in which Western powers tried to gain unfettered access to Chinese products and markets for European and U.S. trade.

Western traders, including those from the United States, had long sought a variety of Chinese products (including furniture, silk and tea), but found there were few products that China wanted from the West. American trade with China began as early as 1784, relying on North American exports such as furs, sandalwood, and ginseng, but American interest in Chinese products soon outstripped the Chinese appetite for these American exports. The British had already discovered a great market in southern China for smuggled opium, and American traders soon also turned to opium to supplement their exports to China. Beyond the health problems related to opium addiction, the increasing opium trade with the Western powers meant that for the first time, China imported more goods than it exported. Settling this financial problem eventually led to the First Opium War between Great Britain and China, from 1839 to 1842. After defeating the Chinese in a series of naval conflicts, the British were in a position to make a large number of demands from the weaker Qing Government of China, in the Anglo-Chinese Treaty of Nanjing. Not to be outdone, U.S. negotiators sought to conclude a similar treaty with the Chinese, to guarantee the United States many of the favorable terms awarded the British. The Chinese readily agreed in an effort to keep all foreigners on the same footing.

U.S. President John Tyler chose Massachusetts Congressman Caleb Cushing as his representative in treaty negotiations with the Chinese. Cushing and his counterparts reached the terms of the treaty quickly and signed it at Wangxia, a suburb of the Portuguese port city of Macau, in 1844. The Treaty of Wangxia replicated many of the key terms of the Treaty of Nanjing. Most importantly, it established five treaty ports as open for Chinese-Western trade (Guangzhou, Xiamen, Fuzhou, Ningbo, and Shanghai). These treaty ports became key crossroads for Western and Chinese culture, as they were the first locations where foreigners and foreign trading operations could own land in China. 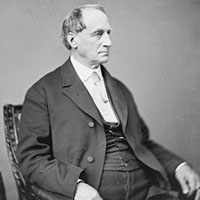 The U.S. treaty was somewhat longer than the British version, as it included major points from the Treaty of Nanjing, but also added some issues of particular interest to the United States. Article 17 protected the interests of American missionaries in China (several had acted as translators during the negotiation process). Article 18 allowed Americans living or working in China to employ tutors to help them learn Chinese, a practice formerly forbidden by the Chinese Government. Unlike Great Britain, the United States agreed that anyone involved in the opium trade or the smuggling of contraband would be prosecuted under Chinese law, but, with that exception, the treaty allowed for other Americans in China to be afforded the benefits of extraterritoriality. This meant that any American accused of committing a crime in China would not be subject to the jurisdiction of the local law, but would instead be tried and, if necessary, punished by American officials in China. Due to the most-favored-nation clause in all of the western powers’ treaties with the Chinese Government, any special consideration given one power could ultimately be claimed by them all.

In the 1850s, the United States and the European powers grew increasingly dissatisfied with both the terms of their treaties with China, and the Qing Government’s failure to adhere to them. The British forced the issue by attacking the Chinese port cities of Guangzhou and Tianjin in the Second Opium War (1857–1858). Under the most-favored-nation clause, all of the foreign powers operating in China were permitted to seek the same concessions of China that Great Britain achieved by force. As a result, France, Russia, and the United States all signed treaties with China at Tianjin in quick succession in 1858.

The agreements reached between the Western powers and China following the Opium Wars came to be known as the “unequal treaties” because in practice they gave foreigners privileged status and extracted concessions from the Chinese. Ironically, the Qing Government had fully supported the clauses on extraterritoriality and most-favored nation status in the first treaties in order to keep the foreigners in line. This treaty system also marked a new direction for Chinese contact with the outside world. For years, the Chinese had conducted their foreign policy through the tribute system, in which foreign powers wishing to trade with China were required first to bring a tribute to the emperor, acknowledging the superiority of Chinese culture and the ultimate authority of the Chinese ruler. Unlike China’s neighbors, the European powers ultimately refused to make these acknowledgements in order to trade, and they demanded instead that China adhere to Western diplomatic practices, such as the creation of treaties. Although the unequal treaties and the use of the most-favored-nation clause were effective in creating and maintaining open trade with China, both were also important factors in building animosity and resentment toward Western imperialism.