John Milton Hay was appointed Secretary of State in President William McKinley’s Cabinet on September 30, 1898, and entered into duty the same day. He continued in office under President Theodore Roosevelt following McKinley’s assassination in 1901 and served until his death in office on July 1, 1905. 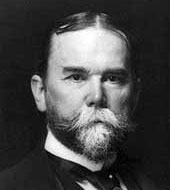 Hay was born in Salem, Indiana in 1838 to a physician who had moved westward from Virginia, living for a time in Kentucky and eventually settling in Indiana. Educated first at home and then at a private academy, Hay attended Illinois State College in 1852. Three years later, he enrolled in Brown University and graduated in 1858. Hay studied law in the office of his uncle and was admitted to the Illinois bar in 1861. During this time, he met Abraham Lincoln and played a small part in his presidential campaign. After Lincoln’s election, the new President selected Hay as his private secretary.

Following the U.S. Civil War, Hay served in multiple diplomatic posts, including those of Paris, Vienna, and Madrid. In 1870, he left the diplomatic service to write. He would eventually publish a ten-volume study of Lincoln, co-written with John Nicolay.

Hay returned to public service in 1896 when newly elected President McKinley appointed him Ambassador to Great Britain. He was offered the position as Secretary of State while the United States negotiated the peace treaty with Spain after winning the Spanish-American War. He accepted the offer and entered into duty in September of 1898.

Hay had a significant influence on the direction of U.S. foreign policy while serving in President McKinley’s Cabinet. He faced the aftermath of the and the annexation of the , which amplified U.S. interest in Asia.

As Secretary of State, Hay was a proponent of increased trade through the policy. He worked to encourage stability in China and to counteract the rising nationalism that threatened foreign interests in China, which included the challenge of the Boxer Rebellion of 1900.

As Secretary, Hay also secured the settlement of the Alaska-Canada boundary controversy. When President McKinley was assassinated, Hay stayed on as Secretary of State to serve under President Theodore Roosevelt. Roosevelt and Hay had few policy differences, although the new President wielded greater influence over foreign policy than his predecessor.

Hay helped secure, by treaty, the right for the United States to construct and defend the in 1903.

Although he suffered from deteriorating health, Hay played an active role in the Roosevelt administration during the last two years of his tenure. He died in office in 1905.