During the American Revolution, a cash-strapped Continental Congress accepted loans from France. Paying off these and other debts incurred during the Revolution proved one of the major challenges of the post-independence period. The new U.S. Government attempted to pay off these debts in a timely manner, but the debts were at times a source of diplomatic tension. 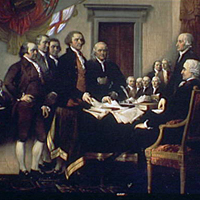 In order to pay for its significant expenditures during the Revolution, Congress had two options: print more money or obtain loans to meet the budget deficit. In practice it did both, but relied more on the printing of money, which led to hyperinflation. At that time, Congress lacked the authority to levy taxes, and to do so would have risked alienating an American public that had gone to war with the British over the issue of unjust taxation.

The French Government began to secretly ship war materiel to the American revolutionaries in late 1775. This was accomplished by establishing dummy corporations to receive French funds and military supplies. It was unclear whether this aid was a loan or a gift, and disputes over the status of this early assistance caused strong disagreement between American diplomats in Europe. Arthur Lee, one of the American commissioners in France, accused another, Silas Deane, of financial misdealings, while the third member of the commission, Benjamin Franklin, remained aloof. Lee eventually succeeded in convincing Congress to recall Deane. The early French aid would later resurface as one of the disputes behind the that led to the Quasi-War with France.

During the Revolution, the French Government also provided the Americans with loans, eventually totaling over two million dollars, most of which were negotiated by Benjamin Franklin. John Adams also secured a loan from Dutch bankers in 1782. After fighting between the Americans and the British ended in 1783, the new U.S. Government established under the Articles of Confederation needed to pay off its debt, but lacked sufficient tax authority to secure any revenue. The government struggled to pay off the loans, stopping payments of interest to France in 1785 and defaulting on further installments that were due in 1787. The United States also owed money to the Spanish Government and private Dutch investors, but focused on paying off the Dutch because Amsterdam remained the most likely source of future loans, which the United States successfully obtained in 1787 and 1788, despite its precarious financial state.

Under the U.S. Constitution of 1789, the new federal government enjoyed increased authority to manage U.S. finances and to raise revenues through taxation. Responsibility for managing debts fell to Secretary of the Treasury Alexander Hamilton. Hamilton placed U.S. finances on firmer ground, allowing for the U.S. Government to negotiate new loans at lower interest rates. In addition, the United States began to make regular payments on in its French debts starting in 1790, and also provided an emergency advance to assist the French in addressing the 1791 slave revolt that began the .

Although the federal government was able to resume debt payments, total federal expenditures exceeded revenues during many years in the 1790s. Hamilton therefore sought additional loans on Dutch capital markets, although the improved U.S. financial situation made these loans easier to obtain. These private loans from Dutch bankers also helped pay off loans owed to the Spanish Government, back pay owed to foreign officers, and U.S. diplomatic expenses in Europe.

In 1795, the United States was finally able to settle its debts with the French Government with the help of James Swan, an American banker who privately assumed French debts at a slightly higher interest rate. Swan then resold these debts at a profit on domestic U.S. markets. The United States no longer owed money to foreign governments, although it continued to owe money to private investors both in the United States and in Europe.

Although U.S. finances had been shaky under the Articles of Confederation, the United States was able to place itself on a sound financial footing during the 1790s. This enabled it to preempt diplomatic embarrassment and dependence on foreign powers during that period, and also improved U.S. credit on European capital markets, which enabled the U.S. Government to obtain low-interest loans for the Louisiana Purchase in 1803.