The Constitutional Convention in Philadelphia met between May and September of 1787 to address the problems of the weak central government that existed under the Articles of Confederation. The United States Constitution that emerged from the convention established a federal government with more specific powers, including those related to conducting relations with foreign governments. Under the reformed federal system, many of the responsibilities for foreign affairs fell under the authority of an executive branch, although important powers, such as treaty ratification, remained the responsibility of the legislative branch. After the necessary number of state ratifications, the Constitution came into effect in 1789 and has served as the basis of the United States Government ever since. 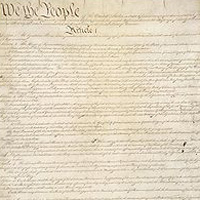 Under the Articles of Confederation, the federal government faced many challenges in conducting foreign policy, largely due to its inability to pass or enforce laws that individual states found counter to their interests. The 1783 Treaty of Paris, which ended the American War of Independence, stipulated that debts owed by Americans to British subjects were to be honored, and also stipulated that former British loyalists could bring forth suits in U.S. courts to recover confiscated property. These provisions were unpopular and many states blocked their enforcement. This led to British refusal to vacate military forts in U.S. territory. Additionally, after the war, British traders flooded U.S. markets with British goods, to the detriment of American importers and manufacturers. The Confederation Congress lacked the authority to regulate this trade, and intrastate trade was further hampered by states’ own attempts to impose import duties on goods from elsewhere in the United States. Lastly, the Spanish Government, which controlled New Orleans, barred American ships from navigating the Mississippi River. Southern delegates to the Confederation Congress wanted to lift this ban, while coastal merchants, especially in the northeast, were willing to make concessions in exchange for a treaty with otherwise favorable commercial terms. The large majorities necessary for ratification of such measures under the Articles of Confederation often resulted in the deadlock along sectional lines between North and South. 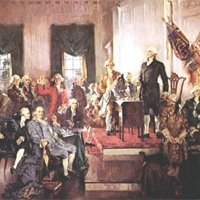 The Constitutional Convention in Philadelphia

In attempting to resolve such issues, as well as problems arising from the payment of debts from the Revolutionary War and other domestic issues, the delegates to the Constitutional Convention created a model of government that relied upon a series of checks and balances by dividing federal authority between the Legislative, the Judicial, and the Executive branches of government. The framers of the Constitution had originally imagined a weak presidency and a strong legislature divided into a House of Representatives and the Senate. Under the Articles of Confederation, considerable minor paperwork had bogged down important business enough that legislators decided to establish an executive branch to deal with routine paperwork. When writing the Constitution, the framers expected the Senate to handle important issues, particularly the ratification of treaties, while the Executive would attend to matters of lesser consequence. However, as deliberations continued, the Executive branch acquired more power to deal with some of the issues that had been a source of sectional tension under the Articles of Confederation—and so the President acquired the authority to conduct foreign relations. The two-thirds clause for ratification of treaties in the Senate, as opposed to a simple majority, allowed the South a greater voice in these matters and assuaged concerns about the attempts to abandon navigation of the Mississippi.

After the ratification of the Constitution in 1789, the machinery of state had been designed, but not yet tested and put to use. The provisions for management of foreign affairs would be put to the test in 1794, when the Senate had the opportunity to accept or reject the controversial treaty with Great Britain negotiated by John Jay.