The French Revolution lasted from 1789 until 1799. The Revolution precipitated a series of European wars, forcing the United States to articulate a clear policy of neutrality in order to avoid being embroiled in these European conflicts. The French Revolution also influenced U.S. politics, as pro- and anti- Revolutionary factions sought to influence American domestic and foreign policy. 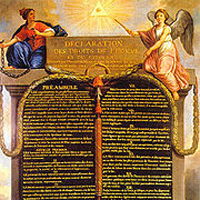 The French Declaration of Rights

When the first rumors of political change in France reached American shores in 1789, the U.S. public was largely enthusiastic. Americans hoped for democratic reforms that would solidify the existing Franco-American alliance and transform France into a republican ally against aristocratic and monarchical Britain. However, with revolutionary change also came political instability, violence, and calls for radical social change in France that frightened many Americans. American political debate over the nature of the French Revolution exacerbated pre-existing political divisions and resulted in the alignment of the political elite along pro-French and pro-British lines. Secretary of State Thomas Jefferson became the leader of the pro-French Democratic-Republican Party that celebrated the republican ideals of the French Revolution. Secretary of the Treasury Alexander Hamilton led the Federalist Party, which viewed the Revolution with skepticism and sought to preserve existing commercial ties with Great Britain. With the two most powerful members of his cabinet locked in opposition, President George Washington tried to strike a balance between the two.

From 1790 to 1794, the French Revolution became increasingly radical. After French King Louis XVI was tried and executed on January 21, 1793, war between France and monarchal nations Great Britain and Spain was inevitable. These two powers joined Austria and other European nations in the war against Revolutionary France that had already started in 1791. The United States remained neutral, as both Federalists and Democratic-Republicans saw that war would lead to economic disaster and the possibility of invasion. This policy was made difficult by heavy-handed British and French actions. The British harassed neutral American merchant ships, while the French Government dispatched a controversial Minister to the United States, Edmond-Charles Genêt, whose violations of the American neutrality policy embroiled the two countries in the Citizen Genêt Affair until his recall in 1794. 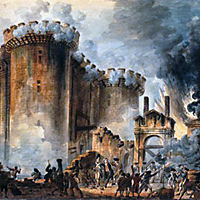 The Storming of the Bastille

In 1794, the French Revolution entered its most violent phase, the Terror. Under foreign invasion, the French Government declared a state of emergency, and many foreigners residing in France were arrested, including American revolutionary pamphleteer Thomas Paine, owing to his British birth. Although U.S. Minister to France Gouverneur Morris was unable to obtain Paine’s release, Morris was able to intercede successfully on behalf of many other Americans imprisoned during the Terror, including the American Consuls at Dunkirk, Rouen, and Le Havre. Once the Terror ended in late July of 1794, the arrests ended, and Paine, who had been scheduled to be executed, was released.

Although the French Revolution had ended its radical phase, Federalists in the United States remained wary of revolutionary ideology infiltrating the United States. Many French citizens, refugees from the French and Haitian revolutions, had settled in American cities and remained politically active, setting up newspapers and agitating for their political causes. A French spy, Victor Collot, traveled through the United States in 1796, noting the weaknesses in its western border. When a breakdown in diplomatic negotiations resulted in the Quasi-War with France, the Federalist-controlled Congress passed a series of laws known as the Alien and Sedition Acts, intended to curb political dissent and limit the political participation of immigrants by easing deportation and lengthening the time required for citizenship. A number of political radicals were arrested for sedition, including Congressman Matthew Lyon and newspaper editors James Thompson Callendar and William Duane. Many refugees, sensing American hostility, chose to return to France and Haiti since the political situation had temporarily calmed in both places.

The Alien and Sedition Acts, originally intended to prevent a growth in pro-French sentiment, actually backfired for the Federalists. Taken aback by such extreme measures, swing voters in the presidential election of 1800 instead backed the pro-French Thomas Jefferson and his Democratic-Republican Party, instead of the Federalist John Adams, who was running for re-election as President. Adams had also alienated the anti-Revolutionary wing of his party by seeking peace with France, whose revolution had already been brought to a close by General Napoleon Bonaparte.