To announce his decision not to seek a third term as President, George Washington presented his Farewell Address in a newspaper article September 17, 1796. 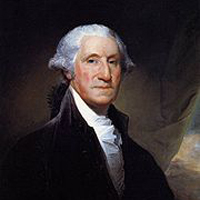 Frustrated by French meddling in U.S. politics, Washington warned the nation to avoid permanent alliances with foreign nations and to rely instead on temporary alliances for emergencies. Washington’s efforts to protect the fragile young republic by steering a neutral course between England and France during the French Revolutionary Wars was made extremely difficult by the intense rhetoric flowing from the pro-English Federalists, led by Alexander Hamilton, and the pro-French, personified by Thomas Jefferson. In his farewell address, Washington exhorted Americans to set aside their violent likes and dislikes of foreign nations, lest they be controlled by their passions: “The nation which indulges toward another an habitual hatred or an habitual fondness is in some degree a slave.” Washington’s remarks have served as an inspiration for American isolationism, and his advice against joining a permanent alliance was heeded for more than a century and a half.