Following the end of the American Revolution, the United States struggled to define its foreign policy, to determine how to implement it, and to maintain necessary commercial ties with Europe without becoming embroiled in European conflicts and politics. Differences over foreign policy became a basis for the founding of political parties in the new nation as the debate pitted the Federalists, led by the Secretary of the Treasury Alexander Hamilton, against the Jeffersonians, represented by Secretary of State Thomas Jefferson. 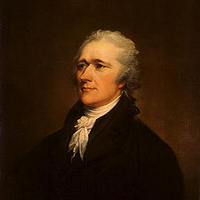 The Federalists supported the development of a strong international commerce and, with it, the creation of a navy capable of protecting U.S. merchant vessels. The Jeffersonians favored expansion across the vast continent that the new republic occupied.

The Federalists and Jeffersonians also disagreed over U.S. policy toward political events in Europe. After the outbreak of the French Revolution in 1789, the Federalists distrusted France and encouraged closer commercial ties to England, while the Jeffersonians preferred to support the new French Republic.

Conflict in Europe between France, Britain, and Spain in the late 1790s, resulted in President George Washington declaring American neutrality. The Jay Treaty with Britain (1794) and the Pinckney Treaty with Spain (1795) aimed at preserving this neutrality. In his Farewell Address, Washington promoted a vision of American diplomacy that involved no “entangling alliances” with European powers.