Mahan’s The Influence of Sea Power upon History: Securing International Markets in the 1890s

In 1890, Captain Alfred Thayer Mahan, a lecturer in naval history and the president of the United States Naval War College, published The Influence of Sea Power upon History, 1660–1783, a revolutionary analysis of the importance of naval power as a factor in the rise of the British Empire. Two years later, he completed a supplementary volume, The Influence of Sea Power upon the French Revolution and Empire, 1793–1812. 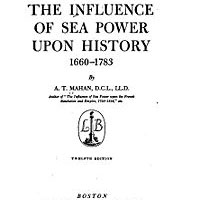 Book Cover of the 12th Edition of Thayer Mahan’s The Influence of Sea Power upon History, 1660–1783

Mahan argued that British control of the seas, combined with a corresponding decline in the naval strength of its major European rivals, paved the way for Great Britain’s emergence as the world’s dominant military, political, and economic power. Mahan and some leading American politicians believed that these lessons could be applied to U.S. foreign policy, particularly in the quest to expand U.S. markets overseas.

The 1890s were marked by social and economic unrest throughout the United States, which culminated in the onset of an economic depression between 1893 and 1894. The publication of Mahan’s books preceded much of the disorder associated with the 1890s, but his work resonated with many leading intellectuals and politicians concerned by the political and economic challenges of the period and the declining lack of economic opportunity on the American continent.

Mahan’s books complemented the work of one of his contemporaries, Professor Frederick Jackson Turner, who is best known for his seminal essay of 1893, “The Significance of the Frontier in American History.” An American history professor at the University of Wisconsin, Turner postulated that westward migration across the North American continent and the country’s population growth had finally led to the “closing” of the American frontier, with profound social and economic consequences. While Turner did not explicitly argue for a shift towards commercial expansion overseas, he did note that calls for a “vigorous foreign policy” were signs that Americans were increasingly looking outside the continental United States in order to satiate their desire for new economic opportunities and markets.

Mahan was one of the foremost proponents of the “vigorous foreign policy” referred to by Turner. Mahan believed that the U.S. economy would soon be unable to absorb the massive amounts of industrial and commercial goods being produced domestically, and he argued that the United States should seek new markets abroad. What concerned Mahan most was ensuring that the U.S. Government could guarantee access to these new international markets. Securing such access would require three things: a merchant navy, which could carry American products to new markets across the “great highway” of the high seas; an American battleship navy to deter or destroy rival fleets; and a network of naval bases capable of providing fuel and supplies for the enlarged navy, and maintaining open lines of communications between the United States and its new markets.

Mahan’s emphasis upon the acquisition of naval bases was not completely new. Following the Civil War, Secretary of State William Seward had attempted to expand the U.S. commercial presence in Asia by purchasing Alaska in 1867, and increasing American influence over Hawaii by concluding a reciprocity treaty that would bind the islands’ economy to that of the United States. Seward also attempted to purchase suitable Caribbean naval bases. Finally, he attempted to ratify a treaty with the Colombian Government that would allow the United States to build an isthmian canal through the province of Panama. In the wake of the Civil War, however, Congress became preoccupied with Reconstruction in the South, and the Senate rejected all of Seward’s efforts to create a network of American naval bases.

In the 1890s, Mahan’s ideas resonated with leading politicians, including Assistant Secretary of the Navy Theodore Roosevelt, and Secretary of the Navy Herbert Tracy. After the outbreak of hostilities with Spain in May 1898, President William McKinley finally secured the annexation of Hawaii by means of joint resolution of Congress. Following the successful conclusion of the Spanish-American War in 1898, the United States gained control of territories that could serve as the coaling stations and naval bases that Mahan had discussed, such as Puerto Rico, Guam, and the Philippines. Five years later, the United States obtained a perpetual lease for a naval base at Guantanamo Bay, Cuba.