Foreign Relations of the United States, Conference at Quebec, 1944

Memorandum Prepared in the Treasury Department 1

It is suggested that the position of the United States should be deter mined on the basis of the following principles:

It should be the aim of the Allied Forces to accomplish the complete demilitarization of Germany in the shortest possible period of time after surrender. This means completely disarming the German Army and people (including the withdrawal or destruction of all war material) and the total destruction of the whole German armament industry as well as those parts of supporting industries having no other justification.

(a)
Poland should get that part of East Prussia which doesn’t go to the U.S.S.R. and the southern portion of Silesia as indicated on the map.2
(b)
France should get the Saar and the adjacent territories bounded by the Rhine and the Moselle Rivers.
(c)
As indicated in part 3 an International Zone should be created containing the Ruhr and the surrounding industrial areas.3
(d)
Denmark should be given the territories between its present borders and the International Zone, north of the Kiel Canal.
(e)
The remaining portion of Germany should be divided into two autonomous, independent states, (1) a South German state comprising Bavaria, Wuerttemberg, Baden and some smaller areas and (2) a North German state comprising a large part of the old state of Prussia, Saxony, Thuringia and several smaller states. 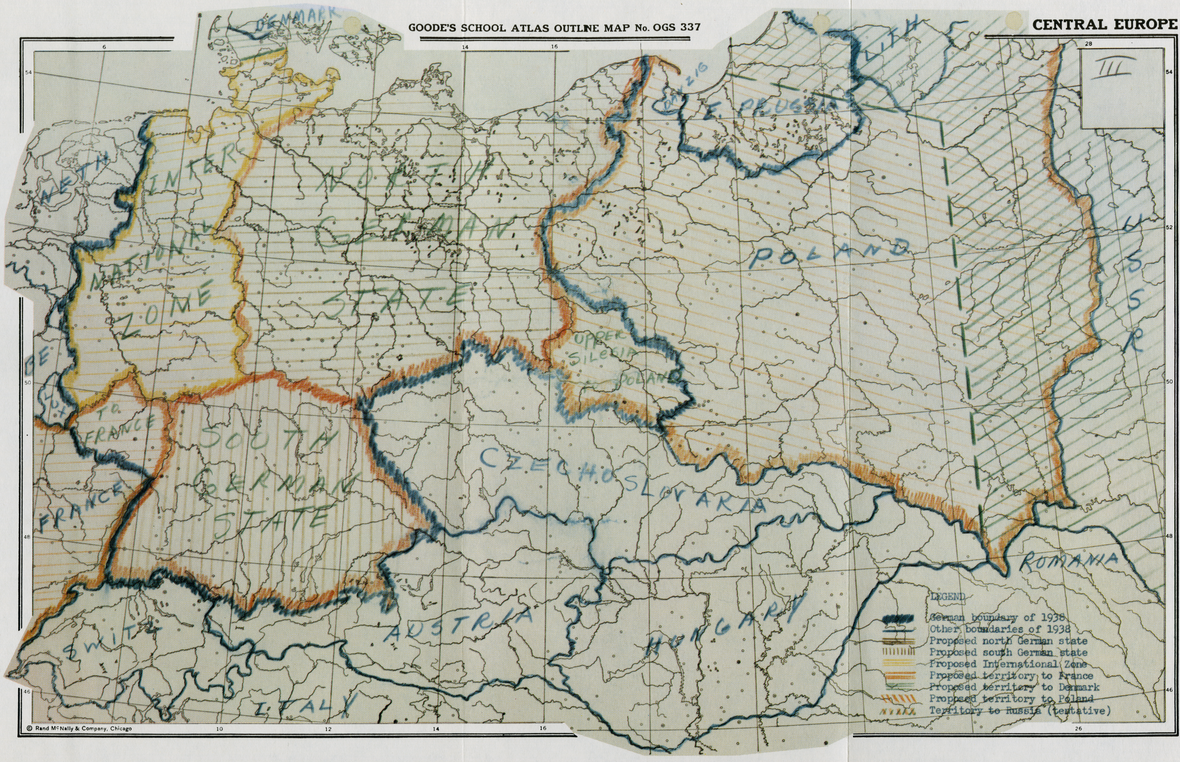 There shall be a custom union between the new South German state and Austria, which will be restored to her pre-1938 political borders.

Here lies the heart of German industrial power. It should be dealt with as follows:

(a)
An International Zone should be created containing the Ruhr and the surrounding industrial areas. Included in the Zone should be the Kiel Canal and the Rhineland. The Zone should be governed by the international security organization to be established by the United Nations. The approximate borders of the Zone are shown on the attached map.
(b)
The internationalization of this area shall in no way interfere with: (a) total destruction of the German armament industry and supporting industries in the Ruhr in accordance with Part 1 of this memorandum, (b) restitution and reparations, including removal and distribution of industrial plants and equipment, in accordance with Part 4 of this memorandum.
(c)
Ownership and control of major industrial properties remaining shall be transferred to the international organization.
(d)
The international organization shall be governed by the following general principles:

(i)
The natural resources and the industrial capacity of the Ruhr area shall not be used or developed so as to contribute in any way to the military potential of Germany or the Ruhr area.
(ii)
The Zone will be a free trade area. However, the importation of capital should be discouraged.

Reparations, in the form of recurrent payments and deliveries, should not be demanded. Restitution and reparation shall be effected by the transfer of existing German resources and territories, e.g.,

(a)
by restitution of property looted by the Germans in territories occupied by them.
(b)
by transfer of German territory and German private rights in industrial property situated in such territory to invaded countries and the international organization under the program of partition.
(c)
by the removal and distribution among devastated countries of industrial plants and equipment situated within the International Zone and the North and South German states delimited in the section on partition.
(d)
by forced German labor outside Germany.
(e)
by confiscation of all German assets of any character whatsoever outside of Germany.

(a)
A particularly intensive effort must be made to apprehend and punish war criminals.
(b)
All members of the following groups should be detained until the extent of the guilt of each individual is determined:

(i)
The S.S.
(ii)
The Gestapo.
(iii)
All high officials of the police, S.A. and other security organizations.
(iv)
All high Government and Nazi party officials.
(v)
All leading public figures closely identified with Nazism.

(c)
Apart from the question of established guilt for special crimes, mere membership in the S.S., the Gestapo and similar groups will constitute the basis for inclusion into compulsory labor battalion to serve outside Germany for reconstruction purposes.
(d)
The Nazi Party and all affiliated organizations such as the Labor Front, The Hitler Youth, The Strength-through-Joy, etc., should be dissolved and their properties and records confiscated. Every possible effort should be made to prevent any attempts to reconstitute them in underground or disguised form.
(e)
All members of the following groups should be dismissed from public office, disenfranchised and disqualified to hold any public office or to engage in the journalist, teaching, and legal professions, or, in any managerial capacity in banking, manufacturing or trade:

(i)
The Nazi Party.
(ii)
Nazi sympathizers who by their words or deeds materially aided or abetted the Nazi program.
(iii)
The Junkers.
(iv)
Military and Naval officers.

(f)
All Junker estates should be broken up and divided among the peasants and the system of primogeniture and entail should be abolished.

6. There should be abrogated and declared null and void all presurrender laws, decrees, regulations or aspects of the same which discriminate on the basis of race, color, creed or political opinions.

(a)
All schools and universities will be closed until an Allied Commission of Education has formulated an effective reorganization program. It is contemplated that it may require a considerable period of time before any institutions of higher education are reopened. Mean while the education of German students in foreign universities will not be prohibited. Elementary schools will be reopened as quickly as appropriate teachers and textbooks are available.
(b)
All German newspapers, magazines, weeklies, etc., will cease publication immediately and shall not resume publication until so directed.
(c)
All German radio stations will be discontinued immediately and shall not be permitted to resume operations until so directed.

The military administration in Germany in the initial period should be carried out with a view toward the eventual partitioning of Germany into three states. To facilitate partitioning and to assure its permanence the military authorities should be guided by the following principles:

(i)
Dismiss all policy-making officials of the Reich government and deal primarily with local governments.
(ii)
Encourage the reestablishment of state governments in each of the states (Länder) corresponding to 18 states into which Germany is presently divided and in addition make the Prussian provinces separate states.
(iii)
Upon the partition of Germany, the various state governments should be encouraged to organize a federal government for each of the newly partitioned areas. Such new governments should, be in the form of a loose confederation of states, with emphasis on states’ rights and a large degree of local autonomy. Eventually such confederacies would assume sovereign functions, including separate currency and postal systems, powers of foreign representation and negotiation, etc.

The sole purpose of the military in control of the German economy shall be to facilitate military operations and military occupation. The Allied Military Government shall not assume responsibility for such economic problems as price controls, rationing, unemployment, production, reconstruction, distribution, consumption, housing, or transportation, or take any measures designed to maintain or strengthen the German economy, except those which are essential to military operations and are indicated above. The responsibility for sustaining the German economy and people rests with the German people with such facilities as may be available under the circumstances.

(a)
The responsibility for the execution of the post-surrender program for Germany set forth in this memorandum is the joint responsibility of the United Nations. The execution of the joint policy agreed upon should therefore eventually be entrusted to the international body which emerges from United Nations discussions.
Consideration of the specific measures to be taken in carrying out the joint program suggests the desirability of separating the task to be [Page 90] performed during the initial period of military occupation from those which will require a much longer period of execution. While the U.S., U.K. and U.S.S.R., will, for practical reasons, play the major role (of course aided by the military forces of other United Nations) in demilitarizing Germany (point 1), the detailed execution of other parts of the program can best be handled by Germany’s continental neighbors.
(b)
When Germany has been completely demilitarized there would be the following distribution of duties in carrying out the German program:

(i)
The U.S. would have military and civilian representation on whatever international commission or commissions may be established for the execution of the whole German program and such representatives should have adequate U.S. staffs.
(ii)
The primary responsibility for the policing of Germany and for civil administration in Germany would be assumed by the military forces of Germany’s continental neighbors. Specifically, these should include Russian, French, Polish, Czech, Greek, Yugoslav, Norwegian, Dutch and Belgian soldiers.