On March 6, 1991, President George H. W. Bush told Congress, “The time has come to put an end to the Arab-Israeli conflict.” Bush’s declaration was followed by eight months of intensive shuttle diplomacy by Secretary of State James Baker, culminating in the Madrid Peace Conference in October 1991. The Conference, co-chaired by Bush and Soviet President Mikhail Gorbachev, was attended by Israeli, Egyptian, Syrian, and Lebanese delegations, as well as a joint Jordanian-Palestinian delegation. For the first time, all of the parties to the Arab-Israeli conflict had gathered to hold direct negotiations—a historically unprecedented event. 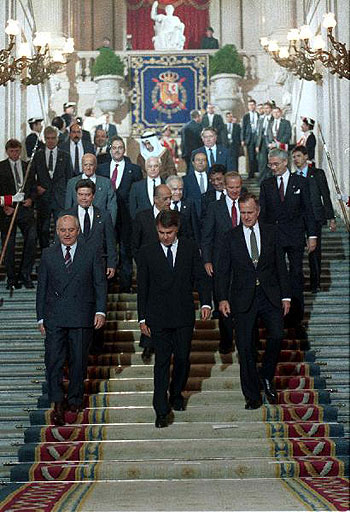 The Conference’s long-term impact, however, was more limited than the Bush administration had hoped. Following Madrid, Israeli, Syrian, Jordanian, and Palestinian representatives continued to meet for bilateral talks in Washington, and multilateral talks commenced in Moscow in 1992. Yet by 1993, the Washington talks had become deadlocked and were overtaken by secret Israeli-Palestinian and Israeli-Jordanian negotiations, which produced the Israeli-Palestinian Declaration of Principles (the so-called “Oslo Accord”) of September 1993 and the Israeli-Jordanian peace treaty of October 1994.

From the Intifada to Madrid

The United States began trying to convene an international Middle East peace conference during the final year of Ronald Reagan’s Presidency. In December 1987, the Palestinians of the West Bank and the Gaza Strip had risen up against Israeli military rule. Hoping to stop the violence and address Palestinian grievances, Secretary of State George Shultz called for an international convention that would serve as a prelude to direct negotiations between Israel, Jordan, and local Palestinians on interim autonomy for the occupied territories, followed by talks on a permanent status agreement. Shultz’s plan, however, went nowhere. Israel rejected the Secretary’s proposals because they did not call for an end to the Palestinian uprising, or intifada,as a precondition to negotiations. In July 1988, Jordan’s King Hussein rendered the Shultz Plan unworkable when he renounced his kingdom’s links to the West Bank.

Throughout 1989–1990, U.S. peacemaking efforts centered on a plan put forward by Israeli Prime Minister Yitzhak Shamir, which called for the Palestinians of the West Bank and Gaza Strip to elect representatives who would negotiate interim arrangements for self-governance with Israel, followed by a permanent status agreement. U.S. and Egyptian efforts to build on this proposal ultimately faltered over Israel’s insistence on vetting potential Palestinian candidates for ties to the Palestine Liberation Organization (PLO). In March 1990, controversy over how to proceed with Shamir’s plan led to the fall of Israel’s national unity government, putting diplomacy on hold. The failure of the plan, combined with sharp U.S.-Israeli exchanges over Israeli settlement-building in the occupied territories, strained relations between Bush and Shamir. However, American efforts to bring the PLO into the peace process fared no better. In November 1988, the PLO finally met U.S. demand that it renounce terrorism and accept U.N. Security Council Resolutions 242 and 338, which called for Arab-Israeli peace and mutual recognition accompanied by Israeli withdrawal from “territories” it had occupied in 1967. Nevertheless, diplomatic contacts between the two sides remained at a low level and were cut off in June 1990, when Chairman Yasir Arafat refused to condemn a terrorist attack perpetrated by the Palestine Liberation Front, a PLO faction.

By March 1991, the Persian Gulf War had created a more favorable context for American peacemaking efforts. The Bush administration’s successful military campaign against Iraq left the President enormously popular at home, and highlighted America’s increasingly dominant role in a post-Cold War Middle East. The Soviet Union had not strongly opposed American intervention, and Arab states, including former Soviet client Syria, joined the coalition against Saddam Hussein. At the same time, the administration felt a need to reward its Arab partners for their support by pushing for progress on the Palestinian issue. Since the PLO backed Iraq during the war, it had alienated Egypt, Syria, and most of the Gulf States, and lost influence over Palestinians in the occupied territories. The Bush administration thus had an opportunity to bring Palestinians into the diplomatic process under conditions that the Israelis might accept.

Between March and October 1991, Baker succeeded in getting Arab leaders and Palestinian representatives from the occupied territories to drop their demands that PLO officials and Palestinians from East Jerusalem participate in an international peace conference. Instead, the Arab parties agreed that the Palestinians would only be represented by delegates from the occupied territories, and as part of a joint Palestinian-Jordanian delegation. Simultaneously, Baker and Bush put pressure on Shamir to drop Israel’s insistence on bilateral negotiations by withholding $10 billion in loan guarantees that he had requested to help settle Jewish immigrants from the Soviet Union. The President insisted that Shamir would have to promise that the funds would not be used to finance new settlement activity in the occupied territories. Shamir refused to accept Bush’s demand, but it undoubtedly played a role in his decision to come to Madrid.

The Conference and its Aftermath

The Madrid Conference opened October 30, 1991, and ended on November 4. Though the parties largely stuck to their traditional positions and did not negotiate seriously with each other, they nevertheless agreed to remain in dialogue. Bilateral talks between Israeli officials and their Arab counterparts would begin in Washington in December 1991, while multilateral negotiations began in Moscow in January 1992. From the beginning, the bilateral talks were generally regarded as the more significant of the two tracks. While these talks acquired greater momentum following the election of Israeli Prime Minister Yitzhak Rabin in June 1992, they failed to yield results before the Clinton administration took office. Ultimately, the Israeli-Jordanian and Israeli-Palestinian tracks established at Madrid would be circumvented by the parties themselves. Frustrated by the Palestinian delegation’s inability to move forward without Arafat’s approval, the Israelis decided to negotiate directly with the PLO, culminating in the signing of the Declaration of Principles on September 13, 1993. King Hussein and the Israelis likewise decided to move forward independently of the Madrid framework, holding direct talks which produced a peace treaty by October 1994.