Asia Pacific Economic Cooperation, or APEC, was formed in 1989 in Australia as an informal forum in which member nations could discuss free trade and economic cooperation along the Pacific Rim. From the perspective of the United States, it has been a crucial institution for economic engagement within the region. 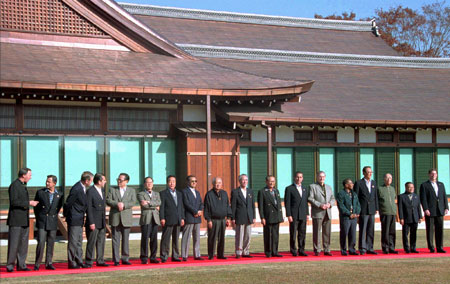 On the red carpet at the garden of the Osaka Guest House, leaders of the 18-nation Asia Pacific Economic Cooperation forum line up for a group photo session. (AP Photo/Koji Sasahara)

APEC was one of many multilateral trade organizations that emerged in the post-Cold War era. As the bipolarity of the Cold War came to an end, the new world order was marked in part by increasing globalization and the growth of regional trading blocs. The United States took a leading role in defining this new world order in which free trade and multilateral organizations played an essential role. Although it assisted in the formation of APEC, the U.S. Government played an even greater role in the creation of the North American Free Trade Association (NAFTA) and the World Trade Organization (WTO). All these organizations were based on identifying shared economic goals and methods, but did not rely upon binding agreements, so states could continue to act in their own interests. These entities aimed to eliminate trade barriers and help states consider regional issues when making economic policy.

Although the countries bordering the Pacific Ocean were extremely diverse in terms of linguistic, cultural and ethnic backgrounds, they shared rapidly developing economic power and common economic interests. Recognizing this, a number of countries in the region began to discuss the creation of a regional organization that would promote free trade and further economic integration in the hope that such a move would benefit the entire region. The resulting organization, APEC, brought together developed and developing economies and promoted the idea of a regional Pacific Rim identity in an effort to increase Pacific-wide cooperation.

Since 1989, APEC has expanded from its original 12 members to include 21 member economies. The founding members were Australia, Brunei Darussalam, Canada, Indonesia, Japan, the Republic of Korea, Malaysia, New Zealand, the Philippines, Singapore, Thailand and the United States. In 1991, the People’s Republic of China, Hong Kong and Chinese Taipei joined the forum. Over the course of the 1990s, Chile, Mexico, Papua New Guinea, Peru and Russia entered the organization. Together, the member economies of APEC account for a substantial proportion of world economic activity.

During its first five years of operation, APEC established its core objectives. In the 1991 Seoul Declaration, APEC member economies proclaimed the creation of a liberalized free trade area around the Pacific Rim as the principle objective of the organization. A 1994 meeting held in Bogor, Indonesia set as the organization’s goal the achievement of “free and open trade and investment” for the region, establishing 2010 as the target date for developed economies and 2020 for developing ones. Each subsequent annual meeting has addressed the implementation of the Bogor Goals along with pertinent issues for the economic and security interests of the member economies. The topics that may be addressed at annual meetings are not proscribed, but the focus tends to be on trade liberalization, promoting business, and economic cooperation.

The United States has long been an active participant in the activities of APEC. In 1993 in Seattle, Washington, President Bill Clinton hosted what became the first annual meeting of member economies—ministers and economic leaders. This act displayed the U.S. commitment to working with APEC member economies to achieve freer trade in the region. Since that time the United States has maintained a high level of engagement with this key organization.