The collapse of the Soviet Union in 1991 created a massive shift in the international balance of power and left the United States as the sole remaining superpower. 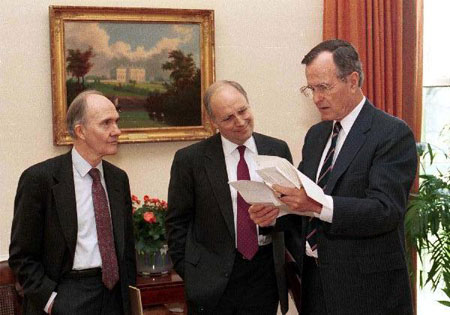 President George H.W. Bush took the oath of office with foreign policy on his mind. He brought to the White House strong credentials: Congressman, Ambassador to the United Nations, Permanent Representative to the People’s Republic of China, Director of the Central Intelligence Agency, and Vice President of the United States. He started his career in military service in 1942, enlisting in the Navy on his 18th birthday and earning a commission as an ensign several days before his 19th birthday. He later served as a torpedo bomber pilot, earning a Distinguished Flying Cross; he was the last veteran of World War II to serve as president.

Patrician and self-effacing, President Bush engaged foreign dignitaries with ease. He already knew most world leaders on a first-name basis. Former President Ronald Reagan’s physical grace and soaring rhetoric led to unkind comparisons in the lead-up to the 1988 campaign. The October 19, 1987, edition of Newsweek featured Bush on the cover with the caption: “Fighting the ‘Wimp Factor.’” Whether from this portrayal of him or merely his highly competitive instincts, Bush overwhelmed his opponents in Republican primary debates and ran a highly aggressive general election campaign against Massachusetts Governor Michael Dukakis. While a majority of Americans voted for him, Bush was a Burkean conservative in a burgeoning Information Age, and he did not always connect with the average man on the street.

Democrats who comprised a majority in the U.S. House of Representatives and the U.S. Senate bore lingering resentment from the 1988 campaign, while conservatives such as House Minority Whip Newt Gingrich recalled Bush’s track record as a political moderate. There were few coattails to President Bush’s electoral triumph, in other words, and neither a “Bush Revolution” in 1988 nor a class of “Bush Democrats” in the 101st Congress. In contrast, the so-called foreign policy establishment held him in high regard. Former Assistant to the President for National Security Affairs Zbigniew Brzezinski endorsed him for president—even though Brzezinski had mentored most of Bush’s opponent’s foreign policy advisers.

President Bush faced additional constraints. The massive tax cuts he himself had termed “voodoo economics” in the 1980 Republican primary had stimulated the U.S. economy but failed to increase tax revenues, while the 1985 Gramm-Rudman Deficit Reduction Act triggered automatic spending cuts. Concern over the national debt was the chief substantive issue of the 1988 campaign, and Bush had vowed to reduce it without raising taxes. Inflation was tame and unemployment relatively low, yet the transition to a post-industrial economy and the influx of high-technology consumer products from Japan raised the specter of a decline in America’s economic and technological leadership. The shock of the October 1987 stock market crash persisted, coming as it did in a year of two bestsellers, Paul Kennedy’s The Rise and Fall of the Great Powers and Allan Bloom’s Closing of the American Mind, which predicted a gloomy future for the West.

Bush rejected such pessimism, as it contrasted with developments in the international political system. Soviet General Secretary Mikhail Gorbachev’s comprehensive reforms spoke to mankind’s universal yearning to live in an open society. Chinese Chairman Deng Xiaoping’s economic reforms demonstrated the intellectual bankruptcy of communism. The ascent of democratic governments in the Philippines and Chile indicated that right-wing authoritarian regimes—as opposed to left-wing totalitarian ones—could in fact evolve into democracies. And the stirrings of liberty in Poland and Hungary offered tremendous opportunity to pierce the Iron Curtain.

Bush appointed as Secretary of State his best friend, James A. Baker, who in turn chose career foreign service officer Lawrence Eagleburger as his deputy. Another close associate, Lieutenant General Brent Scowcroft, became Assistant to the President for National Security Affairs, a position he had held in the administration of President Gerald Ford. Scowcroft chose as his deputy Robert Gates, a career employee of the Central Intelligence Agency who had served on the National Security Council (NSC) under both Scowcroft and Brzezinski. Yet another veteran of the Ford administration, Congressman Richard Cheney, became Secretary of Defense after the Tower nomination debacle. With the addition of General Colin Powell, Reagan’s last national security adviser who became Chairman of the Joint Chiefs of Staff in October 1989, these individuals formed the core of the Bush foreign policy team and would all serve in some capacity for the entirety of the administration. They, in turn, assembled a roster of staffers who prided themselves on working in relative harmony with interdepartmental counterparts. These included Robert Blackwill, Condoleezza Rice, Philip Zelikow, Robert Hutchings, and Richard Haass at the NSC; Robert Zoellick, Dennis Ross, Robert Kimmett, and William Burns at the Department of State; and Paul Wolfowitz at the Department of Defense.

Presiding over this operation, Bush valued teamwork and loyalty. He extolled prudence and pragmatism, and did not entertain romantic visions such as a shield that could make nuclear weapons obsolete. Over time, he and his administration would strive to build what he termed in his September 11, 1991, address before a joint session of congress on the Persian Gulf Crisis and federal budget deficit, a “new world order,” one “freer from the threat of terror, stronger in the pursuit of justice, and more secure in the quest for peace.”