Yugoslavia will cease to function as a federal state within a year, and will probably dissolve within two. Economic reform will not stave off the breakup. [...] A full-scale interrepublic war is unlikely, but serious intercommunal conflict will accompany the breakup and will continue afterward. The violence will be intractable and bitter. There is little the United States and its European allies can do to preserve Yugoslav unity. 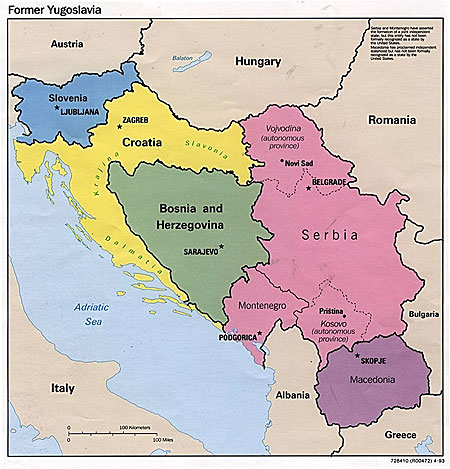 The October 1990 judgment of the U.S. intelligence community, as Thomas Shreeve noted in his 2003 study on NIE 15–90 for the National Defense University, “was analytically sound, prescient, and well written. It was also fundamentally inconsistent with what US policymakers wanted to happen in the former Yugoslavia, and it had almost no impact on US policy.” By January 1992, the Socialist Federal Republic of Yugoslavia ceased to exist, having dissolved into its constituent states.

Yugoslavia—the land of South (i.e. Yugo) Slavs—was created at the end of World War I when Croat, Slovenian, and Bosnian territories that had been part of the Austro-Hungarian Empire united with the Serbian Kingdom. The country broke up under Nazi occupation during World War II with the creation of a Nazi-allied independent Croat state, but was reunified at the end of the war when the communist-dominated partisan force of Josip Broz Tito liberated the country. Following the end of World War II, Yugoslavian unity was a top priority for the U.S. Government. While ostensibly a communist state, Yugoslavia broke away from the Soviet sphere of influence in 1948, became a founding member of the Non-Aligned Movement in 1961, and adopted a more de-centralized and less repressive form of government as compared with other East European communist states during the Cold War.

The varied reasons for the country’s breakup ranged from the cultural and religious divisions between the ethnic groups making up the nation, to the memories of WWII atrocities committed by all sides, to centrifugal nationalist forces. However, a series of major political events served as the catalyst for exacerbating inherent tensions in the Yugoslav republic. Following the death of Tito in 1980, provisions of the 1974 constitution provided for the effective devolution of all real power away from the federal government to the republics and autonomous provinces in Serbia by establishing a collective presidency of the eight provincial representatives and a federal government with little control over economic, cultural, and political policy. External factors also had a significant impact. The collapse of communism in Eastern Europe in 1989, the unification of Germany one year later, and the imminent collapse of the Soviet Union all served to erode Yugoslavia’s political stability. As Eastern European states moved away from communist government and toward free elections and market economies, the West’s attention focused away from Yugoslavia and undermined the extensive economic and financial support necessary to preserve a Yugoslav economy already close to collapse. The absence of a Soviet threat to the integrity and unity of Yugoslavia and its constituent parts meant that a powerful incentive for unity and cooperation was removed.

Slobodan Milosevic, Serbia’s president from 1989, took advantage of the vacuum created by a progressively weakening central state and brutally deployed the use of Serbian ultra-nationalism to fan the flames of conflict in the other republics and gain legitimacy at home. Milosevic started as a banker in Belgrade and became involved in politics in the mid-1980s. He rose quickly through the ranks to become head of the Serbian Communist Party in 1986. While attending a party meeting in the Albanian-dominated province of Kosovo in May 1987, Serbians in the province rioted outside the meeting hall. Milosevic spoke with the rioters and listened to their complaints of mistreatment by the Albanian majority. His actions were extensively reported by Serbian-controlled Yugoslav mass media, beginning the process of transforming the former banker into the stalwart symbol of Serbian nationalism. Having found a new source of legitimacy, Milosevic quickly shored up his power in Serbia through control of the party apparatus and the press. He moved to strip the two autonomous provinces of Kosovo and Vojvodina of their constitutionally-guaranteed autonomy within Serbia by using mass rallies to force the local leaderships to resign in favor of his own preferred candidates. By mid-1989 Kosovo and Vojvodina had been reintegrated into Serbia, and the Montenegro leadership was replaced by Milosevic allies.

The ongoing effects of democratization in Eastern Europe were felt throughout Yugoslavia. As Milosevic worked to consolidate power in Serbia, elections in Slovenia and Croatia in 1990 gave non-communist parties control of the state legislatures and governments. Slovenia was the first to declare “sovereignty” in 1990, issuing a parliamentary declaration that Slovenian law took precedence over Yugoslav law. Croatia followed in May, and in August, the Yugoslav republic of Bosnia-Herzegovina also declared itself sovereign. Slovenia and Croatia began a concerted effort to transform Yugoslavia from a federal state to a confederation. With the administration of George H. W. Bush focused primarily on the Soviet Union, Germany, and the crisis in the Persian Gulf, Yugoslavia had lost the geostrategic importance it enjoyed during the Cold War. While Washington attempted during the summer of 1990 to marshal some limited coordination with its Western allies in case the Yugoslav crisis turned bloody, Western European governments maintained a wait-and-see attitude. At the same time, inter-republic relations in Yugoslavia spiraled out of control. Slovenia overwhelmingly voted for independence in December 1990. A Croatian referendum in May 1991 also supported full independence. Secretary of State James Baker traveled to Belgrade to meet with Yugoslav leaders and urge a political solution to no avail. Slovenia and Croatia both declared formal independence on June 25, 1991.

The Yugoslav Army (JNA) briefly intervened in Slovenia, but it withdrew after 10 days, effectively confirming Slovenia’s separation. The Serb minority in Croatia declared its own independence from the republic and its desire to join Serbia, sparking violence between armed militias. The JNA intervened in the conflict ostensibly to separate the combatants, but it became quickly apparent that it favored the Croatian-Serbs. The war that followed devastated Croatia, resulting in tens of thousands dead, and hundreds of thousands of people displaced. In Bosnia-Herzegovina, a referendum on independence took place in March 1992, but was boycotted by the Serb minority. The republic declared its independence from Yugoslavia in May 1992, while the Serbs in Bosnia declared their own areas an independent republic. Macedonia itself also declared independence following a September 1991 referendum, and a U.S. peacekeeping and monitoring force was dispatched to the border with Serbia to monitor violence.

Croatia and Slovenia were internationally recognized in January 1992, with Bosnia’s independence recognized soon thereafter. The three countries joined the United Nations on May 22, 1992. Serbia and Montenegro formed a new Federal Republic of Yugoslavia as a successor state to old Yugoslavia, but the international community did not recognize its successor claim. Over the next three years, the war in Bosnia and Herzegovina claimed hundreds of thousands of lives and displaced millions from their homes, as Europe witnessed the most horrific fighting on its territory since the end of World War II. In 1998–1999, violence erupted again in Kosovo, with the province’s majority Albanian population calling for independence from Serbia. A NATO bombing campaign and economic sanctions forced the Milosevic regime to accept a NATO-led international peace keeping force. The province was placed under U.N. administrative mandate. With the economy crumbling, Milosevic lost his grip on power in 2001, was arrested, and turned over to the International Crimes Tribunal in The Hague. He died in prison in 2006, before his trial concluded. In 2008, Kosovo declared independence and was recognized by the United States and most European states, despite Russian objections.