When the Spanish cargo schooner La Amistad came aground off the coast of Long Island, New York in August 1839, the United States found itself with an explosive legal and diplomatic case that would pit the American system’s ability to provide justice for all on its shores against the federal government’s ability to enforce its treaty obligations where the jurisdiction of states is involved. Officers of the United States survey ship Washington found the Amistad in a state of distress, bearing 53 Africans and the two Spaniards who purchased them in Cuba with the intention of trading them into slavery there. The Africans had mutinied, however, and attempted to have the Spanish owners sail them back to Africa. After the American naval officers helped the owners recover control of the ship and arranged for the guarded detention of the Africans in Connecticut, procuring the Africans’ freedom became the cause celebre of the burgeoning abolitionist and missionary movement. 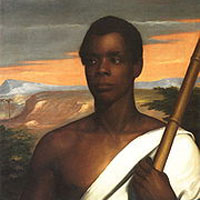 Two lawsuits ensued. The Washington officers brought the first case to federal district court over salvage claims while the second case began in a Connecticut court after the state arrested the Spanish traders on charges of enslaving free Africans. The Spanish foreign minister, however, demanded that the Amistad and its cargo be released from custody and the “slaves” sent to Cuba for punishment by Spanish authorities. While the Van Buren administration accepted the Spanish crown’s argument, Secretary of State John Forsyth explained, the president could not order the release of the Amistad and its cargo because the executive could not interfere with the judiciary under American law. He could also not release the Spanish traders from imprisonment in Connecticut because that would constitute federal intervention in a matter of state jurisdiction. Less interested in the separation of powers or the division of sovereignty in a federal state than in procuring immediate satisfaction for the Queen’s honor, the Spanish minister retorted that the arrest of Spaniards and the holding of their “Negro property” were violations of the treaty of 1795 between Spain and the United States. Thus, at Forsyth’s direction, an attorney for the United States government appeared before the U. S. District Court and presented Spain’s argument that since a federally owned ship rescued the Amistad, the United States was obligated by international treaty to return the ship and its cargo to the Spanish owners.

The district court judge ruled that the Africans were not Spanish slaves, being captured as free men in Africa, and he ordered the U.S. to release them from prison and transport them back to Africa. Rejecting the argument that the Africans were the Spanish traders’ private property and their sale subject to salvage claims, the judge ruled that the Washington officers’ salvage payments be taken from the remaining cargo of the Amistad. The U.S. Government, feeling pressure from Spain and fearing Southern outcry against the court’s advocacy of African freedom, appealed the decision to the Supreme Court. To argue against the U.S. Government for the Africans’ freedom, the Christian Missionary Association convinced former President and Secretary of State John Quincy Adams to come out of retirement and face the predominantly southern Supreme Court bench. In a masterpiece of American law, Adams presented the case of the Africans’ freedom as a test of the American republic’s sincerity in the ideals it espoused abroad. The Supreme Court ruled for the Africans, accepting the argument that they were never citizens of Spain and were illegally taken from Africa where they lived in a state of freedom. The court acknowledged that the United States’ argument that it had obligations to Spain under the treaty, but said that the treaty “never could have been intended to take away the equal rights of [the Africans].” The 53 Africans returned to their homeland and the job of resisting Spain’s continued demand for damages passed onto incoming Secretary of State Daniel Webster.