Chile’s armed forces are reputed to be among the most apolitical in Latin America. They have not actively intervened in the government since 1932, a record equaled in few other countries in the hemisphere. The armed forces as well as the police are respected for their professional attitude and capability, although deficiencies in training and equipment are becoming more pronounced.

As a result of its financial difficulties, the government has not provided much modern equipment for the armed forces. Some officers are beginning to view this as an indication that the civilian government is indifferent to the military requirements of the country and of the fighting forces. Furthermore, some conservative officers are concerned that a Communist-supported candidate may be elected in the presidential election next year, and that such a development could provoke intervention by neighboring countries. Younger officers are being influenced by actions of the armed forces in Argentina and Peru. There is growing talk, therefore, of increasing the military’s influence over the government.

During colonial times the army was the mainstay of the government. Because of the army’s small size, a militia was developed to supplement the regular army. Most of the militia officers were young native-born colonials, and the militia was an important factor in the struggle for independence.

Chile maintained a relatively democratic political system until 1924. At that time, disgusted with the country’s economic situation and with extensive political bickering, a group of conservative generals dissolved Congress and forced the resignation of the president, Arturo Alessandri. Early the next year a more liberal group, led by Colonels Carlos Ibanez and Marmaduke Grove, led a coup against the conserva[Page 45]tive junta and brought Alessandri back to serve out the remainder of his term. During 1926 and 1927 Ibanez became concerned about the inefficient way the government was being run, and in the 1927 election he managed to win the presidency. Coping with the effects of the depression, which hit Chile very hard, was too much for him, however, and he resigned in 1931. A spokesman for the oligarchy was elected to replace him. In June 1932 Grove, by now head of the air force, led a coup that established a “socialist republic.” Twelve days later he was overthrown by a conservative military group. An election was held in October, and Arturo Alessandri was again elected president. After this time, the military remained out of politics. In fact, a “republican militia” backed by respected elements in society and politics was formed to make sure that the armed forces confined new activities strictly to military matters.

Since the 1930s the Chilean armed forces have been concerned primarily with what they see as a threat from Argentina and with improving their internal security capability. Only in recent years have salary difficulties and increasing internal security problems caused them to renew their active interests in politics. Many Chileans look upon the 1927–32 period as one of aberration in the face of economic disaster and believe that an apolitical military establishment is the only possible system for their country.

The Chilean armed forces are among the most competent and professional in Latin America. There are 23,000 men in the army, 14,000 in the navy, and 10,000 in the air force. The carabineros, or national police force, have 24,000 men. The armed forces’ equipment, however, is for the most part obsolescent. This situation is responsible for some of the most bitter complaints by the younger officers against the government. They see the Argentine armed forces receiving modern weapons and fear that these weapons may one day be turned against Chile.

The air force in 1966 began a program of purchasing subsonic Hawker Hunter aircraft from Great Britain. The air force would like to buy F–5s from the United States, but budgetary considerations and the prospect of a cutoff of US economic aid if such equipment is bought have delayed any such negotiations.

The navy, too, is plagued by aging equipment. Although it carries two submarines in its inventory, one is in overhaul and the other is in only slightly better condition. Argentina’s purchase in 1968 of an aircraft carrier of World War II vintage triggered considerable uneasiness in the Chilean Navy.

The carabineros are a professional national police force of extremely high standards. They probably would be able to contain civil disturbances, even if these were widespread. If the unrest continued [Page 46] over a long period, however, they probably would be forced to call on the army for help. The army recently has been increasing its internal security capability, but it is still likely to rely more on firepower than on less drastic riot-control techniques. 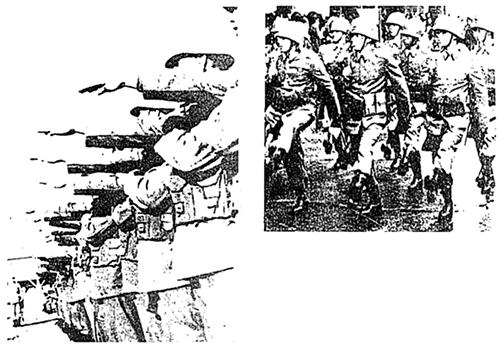 Although the armed forces have remained out of the political mainstream, they are very much a part of Chilean life. They are entitled by law to a percentage of the revenues from the copper industry. Many military officers are bitter because they claim that they have not been receiving this money and that, in fact, the government owes the armed forces a great deal of money.

In addition to these budgetary privileges, the military courts have certain judicial prerogatives that are regularly exercised. Military courts have jurisdiction over civilians who abuse the military as an institution, abuse individuals because they are members of the military, or insult the national flag. They also have jurisdiction over crimes against the military whether committed by military or civilian personnel. In 1968, a Socialist senator was convicted of insulting the military and was jailed for some time. A newspaper director was also jailed briefly. Such actions do not cause much outcry, even among Chileans who are most conscious of their civil liberties.

Although the armed forces have become increasingly sensitive to the political situation in Chile, they have not yet broken with their tra[Page 47]ditional stance of avoiding unconstitutional acts and direct political involvement. A substantial number of higher ranking officers believe, however, that extraconstitutional change will become necessary to break the current stalemate between the executive and legislative branches. They also believe that the military should be given a greater voice in the formation of foreign policy.

Another important factor contributing to the military uneasiness is the possibility that a Communist-supported candidate such as pro-Fidel Castro Socialist Salvador Allende could win the presidential election scheduled for September 1970. It is possible that if the Socialists, Communists, and Radicals could combine in an electoral coalition, and if the candidate of this coalition were clearly leading the field, the military might undertake a coup. Such a move would be most likely to come before the election, to avoid the appearance of deliberately flouting the popular will.

This sentiment for action against a leftist government is by no means held universally within the armed forces. Many officers are reluctant to undertake the task of government themselves. In addition, they believe that they could not be much worse off under a leftist government than they are now. Military men holding such opinions probably would take a wait-and-see attitude toward the government. Younger officers, in particular, are more likely to respond to leftist ideology and thus would be more willing to accept a leftist president unless he ignored the sad state of equipment and training in the Chilean armed forces or moved overtly against military institutions and traditions.

Events in neighboring countries are having an influence in Chile. The military take-overs in Brazil, Argentina, and Peru have given many Chilean officers food for thought. They see these governments attempting reforms without being hampered by political bickering; they wonder if similar methods might work in Chile.

There are reports that representatives of the Brazilian and Argentine armed forces have talked with their Chilean counterparts in the hope of influencing them toward a more interventionist attitude. Argentine leaders are known to be concerned that a far-leftist government might come to power in Chile. In fact, some Argentine officers believe that even the Frei government is much too leftist for comfort. This attitude has convinced some Chilean officers that if Allende or a similar candidate were elected and allowed to take office, his government would be threatened by Argentine military action, on the pretext of an incident along the long, ill-defined Andean border. With this fear in mind, they might favor moving against a leftist government to avoid the threat of Argentine action, which would consolidate public support for whatever government was in power in Chile at the time. 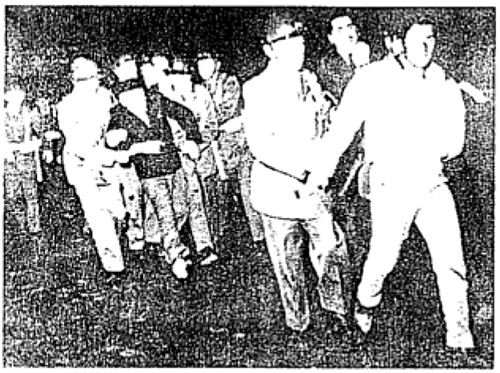 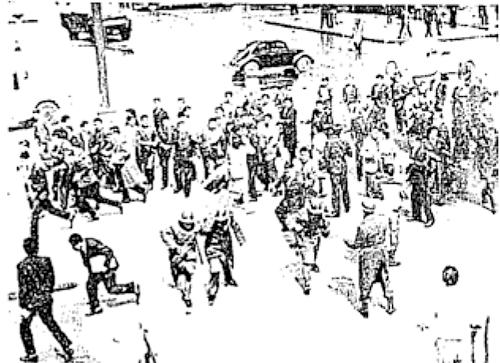 Many military officers believe that former president Jorge Alessandri would be an excellent person to head a military backed government. Alessandri is presently in a very strong position with respect to the presidential race and could win a plurality of the votes next year. If no candidate wins a majority, however, congress decides between the two top vote-getters. Should Allende be the runner-up, the leftist congressmen might vote for Allende. Under these conditions, the military well might step in to install Alessandri as president.

A restraining factor in any military action against the government is the lack of strong leadership at the top. In addition, the assistance, or at least the acquiescence, of the carabineros would be essential to any successful coup.

The increase in terrorism and violence has begun to worry both the military and the carabineros very seriously. Should there be any widespread breakdown of public order, the military might well feel compelled to take direct action. The extent of the military’s concern is indicated by a memorandum circulated within the army in June 1969. This document warned that insurgency is expected at any time after July 1969 and could take place in widely separated areas. Senior officers are warned to take extra precautions to avoid being kidnaped by subversive elements.

During the past 12 months subversion, including both street riots and isolated acts of terrorism, has risen markedly. Opposition elements have increased their ability to create civil disorders. These activities have been led by the youth wings of the Communist and Socialist parties and the extremist Movement of the Revolutionary Left, which is suspected of being the paramilitary arm of the Socialist Party.

In June two terrorist bases were discovered—a “guerrilla training school” in the Santiago area and an arms cache farther south. Bombs, weapons, and maps of military bases and other strategic locations were [Page 49] found at both sites along with evidence that the Socialist Party was heavily involved.

This development would increase the armed forces’ concern—and possibly their willingness to intervene—if the Socialist candidate appears to be winning the presidential election.

As the presidential election nears, reports of military plotting against the Chilean Government are certain to increase. To some extent the military will simply be indulging in the time-honored Latin American practice of keeping an eye on the civilian politicians. It seems probable, however, that widespread public disorder coupled with a strong leftist candidacy could provide the spark that would impel the military to move into the government.

Such action could take a number of forms. The military might form a junta such as the Peruvian armed forces did after their coup in October 1968. They would be more likely, however, to find a prominent civilian to run the government, drawing on technical expertise to undertake the necessary reforms. Frei reportedly has been approached, but has flatly refused to be party to such an action.

Violence will continue to be a problem, especially if the government attempts to hold down on wage increases to combat the soaring inflation. In addition, Socialist provocateurs could take advantage of rural grievances over land reform delays to carry out more “invasions” of land holdings. It was under similar circumstances that eight people were killed last March in Puerto Montt, causing serious political repercussions.

The provocation for a coup in Chile would have to be relatively grave, considering the weight of tradition that is on the side of constitutionality. Nevertheless, the apolitical nature of the Chilean armed forces can no longer be taken for granted. (SECRET NO FOREIGN DISSEM)