Exploring the History of the First Foreign Relations Volume

In 2011, the Department of State celebrates the 150th anniversary of its official documentary history publication, (FRUS). Ironically for a project staffed by historians, much of FRUS’s own history is shrouded in mystery. I am part of a team within the Office of the Historian which has been doing some research to learn more about the series’ past and the context in which it was created. During the year we’ll be highlighting notable and controversial moments in the series’ history here on this website. My own work has focused on the first volume, published in December 1861. includes over 400 pages of correspondence between U.S. diplomats abroad and Secretary of State William Seward, and was released as part of President Abraham Lincoln’s annual message to Congress. 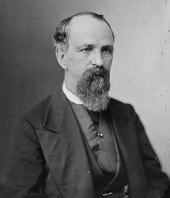 Historians usually start their research with a particular question about the past that they want to answer. The question may be interesting in its own right, or it may help illuminate a contemporary issue. In the case of the first volume of FRUS, we had two main questions: (1) Was the release of this publication a unique event in the Department’s history? (2) Who made the decision to release the volume? In this blog post, I’ll try to answer these questions as best as our present research allows.

First, a bit of context: the argument over slavery in the United States had reached a point in 1860 where it could no longer be contained by the country’s political structure. South Carolina seceded from the United States after the election of Abraham Lincoln, and other southern states soon followed. A key diplomatic challenge faced by the United States in 1861 was to prevent the fledgling Confederacy from gaining recognition from foreign powers. In December 1861, Lincoln published diplomatic correspondence with 24 countries, most of which focused on this very issue.

Was the release of this publication a unique event in the Department’s history? One of the first things we learned was that the United States has a long history of releasing diplomatic documentation to the public, and the tradition predates the release of this volume in 1861. President George Washington submitted to Congress documentation relative to relations with France and Great Britain. In his introductory statement, Washington noted that the “present situation of the several nations of Europe” would be a “matter of interesting inquiry to the legislature, and may indeed give rise to deliberations, to which they alone are competent.” Therefore, Washington felt it was his “duty to communicate to them, certain correspondences, which have taken place.” Dozens of pages of correspondence followed, including letters between Secretary of State Thomas Jefferson and Citizen Genet, Minister from France. Washington sent the materials to Congress, and Congress published them for public consumption. In the decades leading up to the Civil War, Congress consistently requested—and successive Presidents delivered—documentation relating to foreign relations, usually with the caveat that they would only release what was in the “public interest.” These documents would then be published in the . Thus, the correspondence released in 1861 was not unique in that correspondence had been released before. However, the 1861 volume did represent an important evolution, if not a revolution. Prior to 1861, document releases were on an ad hoc basis and tended to be about one issue (relations with one country or the negotiation of a single treaty). The 1861 volume is much more comprehensive and discusses relations around the world under a single cover. It also sparked the regular, annual publication of correspondence.

Who made the decision to release the volume? The request for correspondence came directly from Congress. On July 13, 1861, Samuel Sullivan Cox (Democrat from Ohio) submitted to the House of Representatives, to which he “presume[d], there will be no objection.” The resolution was promptly “read, considered, and agreed to,” and it stated “Resolved, That the President of the United States, at the beginning of the next session of Congress, or at this session, if compatible with the public service, communicate to this House all correspondence with the English, French, Spanish, and other Governments with reference to the right of blockade, privateering, and the recognition of the so-called confederate States.” Another resolution to the same effect passed in the House two days later, and shortly thereafter the Senate passed its own resolution. Although Congress did not get its wish until the end of the year, it is clear that the impetus for the release came from Congress. This Congressional request, combined with what we know about previous releases of documentation, helps us see FRUS from a slightly different angle. Although released by the Department of State, it was not a simple creation of the executive branch. Rather, it was a response to the demands of the legislative branch. Thus, FRUS is an excellent example of the separation of powers in our government: one branch executes foreign policy, another branch keeps a watchful eye on activities by requesting documentation showing how the policies are carried out.

To sum up, our office’s research into the early history of FRUS has taught us some important things. First, our government has a history of releasing foreign relations-related documents that stretches back to the beginning of the republic. Second, the releases represent the balance of powers between two branches of government. Today, the Office of the Historian continues to publish important documents relating to foreign relations. And we continue to do so under a Congressional mandate; the series is currently governed by a law passed by Congress in 1991. In this case, the historical questions we began with illuminate the past and help show some links to the present day. In future posts, my colleagues from the Office will be discussing other lessons we can learn from the 150 years of foreign relations documentation. Stay tuned!