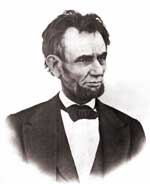 This photograph of Lincoln was taken on March 6, 1865, shortly before he was assassinated. (Photo credit: Wikimedia Commons)

April 1865 was an extraordinary month in the history of the Civil War. On the 9th, Confederate General Robert E. Lee surrendered to Lieutenant General Ulysses S. Grant at Appomattox Court House, Virginia, effectively ending the war. Just days later, the nation was rocked by the news that President Abraham Lincoln had been assassinated in Washington, DC.

The news of Lincoln’s death reverberated around the world and led to an extraordinary publication by the Department of State in 1866. In addition to the usual diplomatic correspondence published in Foreign Relations of the United States (FRUS) volumes, a separate volume consisting entirely of condolences was published. The volume, The Assassination of Abraham Lincoln, Late President of the United States of America, and the Attempted Assassination of William H. Seward, Secretary of State, and Frederick W. Seward, Assistant Secretary, on the Evening of the 14th of April, 1865, collected correspondence from every corner of the globe.

Lincoln was the first U.S. president to be assassinated. Thus, his death was a test for the country and the strength of its constitutional plan of succession. Some countries noted this fact, and their acknowledgement of Andrew Johnson’s presidency demonstrated that his government was viewed as legitimate in the eyes of the world community. The response from China, for example, embodied both regret and reassurance that the transfer of power was perceived as smooth. Prince Kung, Chief Secretary of State for Foreign Affairs, wrote on July 8, 1865, that the announcement of Lincoln’s death “inexpressibly shocked and startled me.” Nevertheless, the news that “on the same day the Vice-President succeeded to the position without any disturbance, and the assassin had been arrested, so that the affairs of government were going on quietly as usual” seemed to satisfy the Prince’s worry, and he hoped that these facts would also “alleviate your grief at the event.”

Other governments sent their official expressions of regret and condolence. Frederick Hassaurek, U.S. Minister to Ecuador, reported on May 29 that the Ecuadorian government had ordered “that all the officers and employés of the republic of Ecuador shall wear mourning for three days, during which time the Ecuadorian flag shall be displayed at half-mast from all the public buildings.” Additionally, Ecuadorian President Gabriel Garcia Moreno wrote to Hassaurek on May 22 that “The fatal news which arrived by yesterday’s mail has produced a profound and painful impression on me. Never should I have through that the noble country of Washington would be humiliated by such a black and horrible crime; nor should I ever have though that Mr. Lincoln would come to such a horrible end, after having served his country which such wisdom and glory under so critical circumstances.”

In the United Kingdom, British Foreign Minister Earl Russell wrote to U.S. Minister Charles Francis Adams on May 1 that Lincoln’s death was a “sad calamity” and recalled that he had already “conveyed to you by letter and in person the deep impression of horror and indignation which so atrocious a crime on the President of the United States had made upon me.” Russell went on to write that “by the command of the Queen, I have directed her Majesty’s minister at Washington to convey to the government of the United States” the condolences of the British government and British people. From Egypt, Agent and Consul General Charles Hale reported on May 5 that “the Pacha of Egypt, has seized the earliest opportunity to express to me the pain with which he has heard the sad tidings of the assassination of the President of the United States, his detestation of the abominable crime, and his sympathy for our country in the grievous loss we have sustained.”

In the first volume of FRUS (and here), Lincoln had urged the United States to recognize Haiti and Liberia, two countries with unique relationships to slavery. The Haitian Revolution at the turn of the nineteenth century terminated slavery in that country, and soon after Liberia was settled by liberated slaves from the United States. In 1862, the United States recognized both countries, and in 1865 both countries reacted to Lincoln’s death. The Liberian proclamation mourned a man who “was not only the ruler of his own people, but a father to millions of a race stricken and oppressed.” Arguing that Lincoln had “died to redeem a nation, a race,” the Liberians predicted that “generations yet unborn shall call him the mighty ruler, the great emancipator, the noble philanthropist.” The Secretary of the Haitian Legation in the United States denounced the assassination as a “horrid crime,” and noted that the death of Lincoln and the attempt on the life of both Sewards “have thrown the whole United States into consternation and mourning, [and] will everywhere excite the same wail of sorrow and condemnation.” 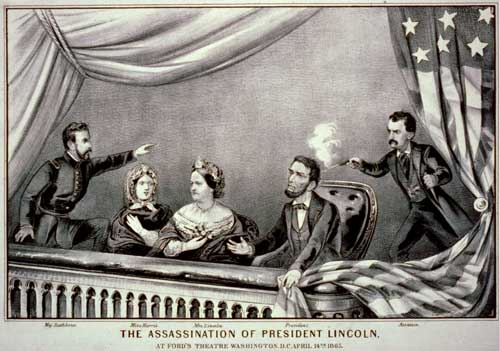 This 1865 print from Currier and Ives depicts the assassination. (Photo credit: Wikimedia Commons)

Perhaps one of the most remarkable parts of the volume comes not from the official expressions of sorrow but the messages sent spontaneously from other groups of citizens all over the globe. FRUS does not usually publish “unofficial,” non-governmental correspondence, but this volume includes a healthy selection of just that type of correspondence. A group of Freemasons in France wrote to President Johnson that they “wish[ed] to express to you their sentiments of admiration, gratitude, and regret for Lincoln, and their profound sympathy for the government of which you are the head. The blood of your martyred magistrate becomes a fecundating dew to give to liberty a new baptism throughout the entire universe.” The residents of Lahaina, in the Hawaiian Islands, passed resolutions in which they “weep together with the republic of America for the murder, the assassination of the great, the good, the liberator Abraham Lincoln, the victim of hell-born treason—himself martyred, yet live his mighty deeds, victory, peace, and the emancipation of those despised, like all of us of the colored races.” A group of workingmen in the Prussian capital of Berlin noted that Lincoln was a laborer’s son and “himself a laborer, he took up the fight for the rights of free labor and carried it to a triumphant termination.” While mourning his death, the laborers noted that “the freedom which has thus been sealed with the blood of one of the noblest men” will ultimately be victorious, and that the U.S. flag will represent “the cause of freedom and civilization” wherever it flies.

This special volume of FRUS documents a remarkable outpouring of grief at the news of Lincoln’s death. Official expressions of sympathy from governments were printed side-by-side with resolutions and proclamations from groups of citizens. A century and a half after his time in office, Lincoln still looms large as one of our most significant presidents. The documents in this volume confirm that his stature around the world was already in place at the time of his death.