By Joshua Botts
Office of the Historian, U.S. Department of State

The first potentially paralyzing clearance battle waged for the Foreign Relations series came in the late 1930s. When preparing the regular annual volumes, Department of State historians—or other officials—could simply omit materials that posed insolvable clearance problems. This in fact occurred in 1936, in response to opposition within the Department and from the Iranian government to publishing records from 1922 concerning a financial mission to Tehran and negotiations for an oil concession. The annual volumes covering 1922 simply skipped over Iran entirely, though the omissions did not diminish the value of the remainder of the compilation.1 The Paris Peace Conference volumes posed a much different challenge because foreign government clearances would be required to publish the jointly “owned” formal minutes of conference proceedings and since the conference record had to be substantially complete to be coherent. If any of the foreign governments that played a major role at the 1919 Paris Peace Conference objected to publishing the records of the conference discussions, Department of State historians would have to put the subseries publication plan on hold until they changed their minds.

In March 1938, the Department sought permission from the governments of France, Great Britain, and Italy to publish documents from the 1919 peace conference.2 Although Italy and Great Britain gave the desired preliminary approvals in June and September, France proved much more hostile to the project.3 The French Foreign Ministry was aghast at the proposal to publish politically sensitive records of the negotiation of the controversial Treaty of Versailles in the midst of domestic political and social strife, heightened international tensions, and fears of war. When Director of Political Affairs at the French Foreign Ministry Renè Massigli met with Edwin Wilson, the Counselor of the U.S. Embassy in Paris, to discuss the issue, he argued that “Europe was today in a highly dangerous situation, perilously near war, and every effort was being made by those in responsible positions to prevent war, to save civilization, and with that end in view to appease conflicts and remove so far as possible every pretext for misunderstanding.” Wilson explained to officials in Washington that Massigli “was frankly terrified at the thought of how publication of the secret documents of the Peace Conference could be seized upon by people who want to promote trouble and misunderstanding. As between the embarrassment … by being put in the position of objecting to the publication of these documents, and the danger of adding fuel to the flames of international controversies, he much preferred the former.” Even delayed publication “might merely prejudice the work of appeasement which might have been done in the meanwhile.” Wilson’s conversation with Massigli ended with the latter concluding that “if during the next month things take a turn for the worse, our thoughts may look forward to the next peace conference rather than to the question of publishing the documents of the last one.”4 After a “sweep” of the French Foreign Ministry removed Massigli in the fall, Wilson felt the French would be more amenable to the project.5 He was right. The French Government agreed to the Peace Conference volumes in late December 1938, allowing Cyril Wynne (chief of the Division of Research and Publication) to announce the project at the American Political Science Association’s annual meeting on December 29, 1938. 6

The first Peace Conference volumes appeared in 1942, and a total of five volumes were released during World War II. The fall of France and hostilities with Italy left Great Britain as the lone holder of foreign equities for the most crucial documents of the Paris Peace Conference volumes, the minutes to the discussions of the Council of Four. While Britain acceded to U.S. requests to print most of the Peace Conference records,7 Winston Churchill and Anthony Eden balked in July of 1943 when the U.S. asked for permission to publish Council of Four discussions during the war. Eden explained that “the publication in particular of the minutes of the Council of Four would have a cramping effect upon any similar confidential discussions which it may be necessary to hold after the present war.” He also worried that printing the Council of Four minutes might “provide hostile propagandists with welcome material.” Finally, Eden objected to the publication of “rough workings kept for the convenience of the statesmen concerned” while one of those statesmen—David Lloyd George—was still alive.8 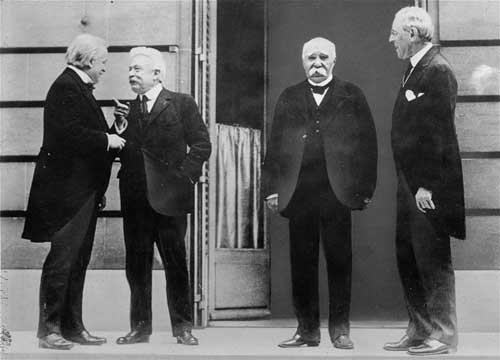 The Big Four of the Allies chat while gathering in Versailles for the Treaty of Versailles, which officially ended World War I, in this 1919 photo. They are, left to right, David Lloyd George, of Great Britain, Vittorio Orlando, of Italy, Georges Clemenceau, of France, and Woodrow Wilson, United States President. (AP Photo)

The Department asked the British government to reconsider its position in early August 1943,9 but soon faced opposition from another source: President Franklin Roosevelt. In preparation for a summit with Churchill at Hyde Park in September, Roosevelt asked Secretary of State Cordell Hull to explain why the U.S. Government was trying to publish the Council of Four minutes. The President expressed “distinct hesitation… because notes of these conversations ought not to have been taken down anyway.”10 Roosevelt’s “hesitation” prompted a spate of memo-writing within the Division of Research and Publication. Staff historian Philip Burnett surmised that the “real reason” for the President’s attitude was the “wretchedly shortsighted” impulse to avoid releasing any information that could potentially be used to criticize the coming peace settlement.11 Hull’s response to Roosevelt echoed the Department’s arguments to the British Government, emphasizing the pressure from academics and Congress for publishing the full record of the Paris Peace Conference and the extent of already-published information about the Council of Four discussions.12

Roosevelt remained unconvinced. He told Hull that publication “would probably result in wholly unwarranted sensational articles” from “hostile sources.” He also explained that “no notes should have been kept. Four people cannot be conversationally frank with each other if someone is taking down notes for future publication.” Roosevelt “felt very strongly about this” and, during his meeting with Churchill at Hyde Park, vetoed publication of the Council of Four minutes for the duration of the war.13 Only in November of 1945, after Lloyd George and Roosevelt had died and Churchill and Eden had lost their government posts, did the Department renew its efforts to secure British permission to publish the Council of Four minutes.14 The volumes appeared the next year and Roosevelt’s intervention in the series was itself included in a FRUS volume published in 1970.

The special FRUS subseries on the Paris Peace Conference marked the culmination of one era for the Foreign Relations series while foreshadowing some of the difficulties that would greet Department of State historians during the Cold War era. During the interwar period, clearance with foreign governments posed the most serious obstacles to publishing comprehensive annual volumes on schedule. Because most of the documentation came from Department of State files, interagency coordination for research and declassification of Foreign Relations compilations was virtually nonexistent. Although the Paris Peace Conference volumes did require an unprecedented amount of research beyond Department files,15 it was not until the 1950s, when the U.S. Senate demanded that the Department of State publish the “Yalta papers,” that FRUS historians confronted the documentary consequences of the rise of the national security state during and after World War II. Then, in the context of intense partisan scrutiny, determined bureaucratic resistance, and familiar British objections, FRUS truly entered the Cold War era.