The end of the Cold War altered the Korean Peninsula’s diplomatic landscape. The Republic of Korea (South Korea) established diplomatic relations with the longstanding allies of the Democratic People’s Republic of Korea (North Korea): the Soviet Union, in 1990, and China, in 1992. In 1991 both Koreas were simultaneously admitted into the U.N. These developments, together with North Korea’s worsening economy and growing need for international aid, opened up the possibility of a thaw in relations, with negotiations over reunification between the two Koreas and normalization of U.S.-North Korean relations. Denuclearization, a key aim of U.S. diplomacy, was at the heart of a series of crises on the Korean Peninsula throughout the Clinton Administration. 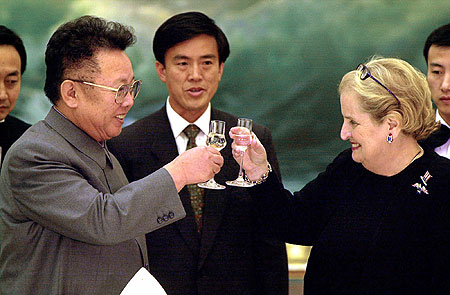 There were signs of hope in early steps toward denuclearization. In January 1992, North Korea publicly committed to signing the nuclear safeguards agreement with the U.N.’s International Atomic Energy Agency (IAEA) and to permitting inspections of its primary nuclear facility at Yongbyon. In April of the same year, the North and South signed the Joint Declaration of the Denuclearization of the Korean Peninsula, which barred the parties from developing or acquiring nuclear weapons and limited them to using nuclear energy for peaceful purposes only.

However, North Korea’s refusal throughout 1992 and 1993 to cease and disclose its nuclear activities at Yongbyon, in defiance of IAEA agreements and directives, and its threat to withdraw from the Nuclear Non-Proliferation Treaty, initiated a series of crises. With the credibility of this Treaty in question and its forthcoming renewal thrown into question, the United States threatened to call upon the U.N. Security Council to issue an ultimatum threatening North Korea with economic sanctions. Tensions subsided by June 1993, when the United States and North Korea issued a joint statement affirming the principle of respect for each other’s sovereignty and noninterference in each other’s internal affairs.

The parties returned to negotiations, but these, too, faltered as North Korea resisted IAEA inspections. By March 1994, North Korean diplomats threatened war if the United States and South Korea went to the U.N. In May North Korea withdrew from the IAEA. A last-minute private trip to North Korea by President Jimmy Carter in June 1994 averted war and led to U.S.-North Korean bilateral negotiations and the October 1994 Agreed Framework for the denuclearization of North Korea.

The Agreed Framework was a staged, multilateral agreement involving the two Koreas, the United States, and Japan. It required Pyongyang to halt its nuclear activities at Yongbyon, allow IAEA monitors in, and eventually dismantle the facility. In exchange, the United States, Japan, and South Korea would provide light water reactors, and the United States would provide interim energy supplies in the form of fuel-oil. Each stage was to build confidence that the parties were willing to continue.

In carrying out the agreement, however, numerous setbacks eroded trust among the parties. While the United States followed through on its promises to ship fuel-oil, the U.S. Congress delayed the deliveries. The 1997 IMF Crisis limited the ability of South Korea to contribute to the construction of the light water reactors, leading to delays. Meanwhile, North Korea engaged in provocative acts against South Korea and Japan, testing ballistic missiles and pursuing other weapons activities. In 1998, suspected nuclear weapons activities at Kumchang-ri brought the Agreed Framework to the brink of collapse. Once inspectors were finally allowed in, they found no evidence of nuclear activity, but mistrust remained high. The Clinton administration worked to get the Agreed Framework back on track, leading to the visit of a North Korean envoy to the United States, a joint statement of no hostile intent, and a reciprocal visit by Secretary of State Madeleine Albright to Pyongyang in October 2000.

However, despite these efforts, the nuclear issue was still unresolved. It was not long before the next crisis would arise, requiring the international community to take another approach to addressing the denuclearization issue. North Korea broke out of the 1994 agreement in the winter of 2002, resulting in the opening of the Six-Party Talks the following year, hosted by China.