The North Atlantic Treaty Organization (NATO) was born at the outset of the Cold War, designed to meet three complementary objectives: deter Soviet expansionism, prevent the revival of nationalist militarism in Europe through a strong North American presence on the continent, and encourage European political integration. Its core function lay in the collective defense of Central and Western Europe against a Soviet attack. The end of the Cold War and the disintegration of the Soviet Union forced the organization and its member states to adapt to a new security environment. This evolution has played out over a protracted series of decisions addressing a series of complex and interrelated issues: the Alliance’s mission in the post-Cold War setting, and the related questions of its force structure, command structure, and decision making processes; NATO’s composition; and its role in the complex system of interlocking European institutions. 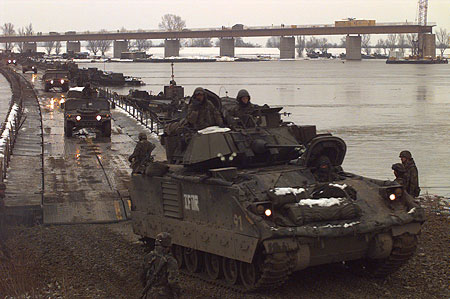 This process began in the late 1980s, as Soviet leader Mikhail Gorbachev instituted a sweeping series of reforms in the Soviet Union. Gorbachev considered it imperative to reduce the proportion of the Soviet economy devoted to defense spending. That objective quickly manifested itself in a new openness toward arms control, and eventually led to a dramatic reduction of Soviet forces in Eastern Europe and abandonment of the Brezhnev Doctrine. The subsequent collapse of the Warsaw Pact and the reunification of Germany ended the threat of Soviet-led invasion that had been the centerpiece of NATO’s defense posture since its foundation.

Wary of Soviet intentions and aware of the possibility of a reversal of these reforms, policymakers in the West responded cautiously to Gorbachev and his calls for a “common European home.” NATO’s first formal response to the changes in the security environment came in July 1990, with the “London Declaration on a Transformed North Atlantic Alliance.” Acknowledging the changes in the Soviet Union, NATO’s heads of state agreed on changes to force structure and nuclear posture, directed the Alliance to prepare a new strategic concept and an accompanying defense strategy, and emphasized the importance of the Conference on Security and Cooperation in Europe (CSCE)’s role in the emerging European security architecture. The London Declaration closed, “Today, our Alliance begins a major transformation. Working with all the countries of Europe, we are determined to create enduring peace on this continent.”

Alliance leaders meeting at the Rome Summit in November 1991 approved a new Strategic Concept outlining NATO’s purpose and missions in the new Europe. The “Rome Declaration on Peace and Cooperation” emphasized the importance of NATO’s traditional collective defense mission, calling for “smaller and more flexible” forces. The Concept outlined NATO’s purpose in providing a “stable security environment in Europe,” a decision that committed the Alliance to sustaining the stability within NATO and areas on its periphery. The Strategic Concept projected NATO’s place in the emerging strategic architecture in Europe, with the maturation of the European Union, an expanded role for the CSCE, and construction of the North Atlantic Cooperation Council as a consultative mechanism for NATO and its former adversaries. The Rome Declaration “welcomed the development of a European security and defence role, reflected in the further strengthening of the European pillar within the Alliance.”

This program for transformation and new capacity was tested immediately. NATO faced instability on its doorstep with the disintegration of Yugoslavia. The conflict in Bosnia-Herzegovina placed severe stress on the Alliance, as its members struggled to reach a common perspective and an effective response to this complex and vicious war. The Alliance committed forces toward limiting the war, enforcing the arms embargo in Operation Sharp Guard and the no-fly zone through Operation Deny Flight. The Alliance’s involvement increased gradually until September 1995, when NATO air attacks against Bosnian Serb forces in Operation Deliberate Force were among the key factors in enabling the peace talks at Dayton that yielded a negotiated settlement to the war. NATO forces then executed the postwar peacekeeping and stabilization mission in Operation Joint Endeavor.

The Brussels Summit in January 1994 continued the progressive elaboration of the Alliance’s role in the new Europe, strongly supporting the maturation of the European Security and Defence Identity and confirming the willingness of NATO to “make collective assets of the Alliance available in operations of the Western European Union.” The Brussels Declaration called for the adaptation of the Alliance’s command and control structures to provide for Combined Joint Task Forces, as a flexible “means to facilitate contingency operations, including operations with participating nations outside the Alliance.” Most significantly, the Brussels Summit addressed the issue of enlargement—reconfirming that the Alliance remained open to NATO expansion, and establishing the Partnership for Peace (PfP) to strengthen practical working relations between the Alliance and participating nations from across the CSCE. The Partnership, expected to “play an important role in the evolutionary process of the expansion of NATO,” began operations that same year.

NATO enlargement was widely debated through the mid-1990s, as policymakers and analysts explored its implications, costs, and likely results. NATO conducted a study of enlargement and established general criteria for new members in September 1995. In December 1996, the Alliance announced its decision to invite new members the following July in a summit to be held in Madrid. The major concern was the effect of enlargement on Russia, with fear that an expansion of NATO to the east would threaten its fragile democracy and any prospects of future cooperation between Russia and the Western democracies. President Bill Clinton addressed that issue with Russia’s President Boris Yeltsin in a March 1997 summit conducted in Helsinki. There the leaders agreed to disagree on NATO’s enlargement, but pledged stronger consultation and, where possible, joint decision making in security issues between NATO and Russia. Two months later Yeltsin signed the “Founding Act on Mutual Relations, Cooperation, and Security between NATO and the Russian Federation,” which established the NATO-Russia Permanent Joint Council. With Russia’s concerns somewhat mollified, NATO invited the Czech Republic, Poland, and Hungary to join the Alliance, projecting an accession date in 1999.

Much work remained, both within the Alliance and across the broader landscape of European security, but this first decade of post-Cold War adaptation established the broad scope of adaptation for NATO. The Alliance had begun its internal transformation, accepted and executed its new missions, recast its relationship with its former adversaries, and begun its enlargement. In doing so, NATO confirmed its utility in the new security environment and its capacity for further change as considered necessary by its member states.