The United States has long had to face the challenge of determining to what degree it wants to participate in global peacekeeping efforts and whether or not U.S. lives should be put at risk for peacekeeping. Events in Somalia between 1992 and 1994 threw that debate into sharp relief. 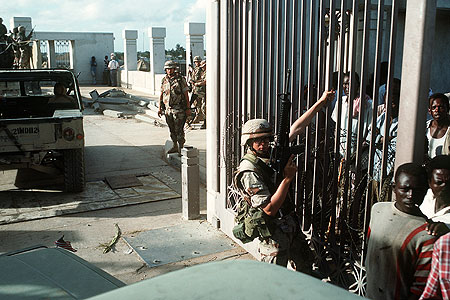 Somalia achieved its independence in 1960 with the union of Somalia, which had been under Italian administration as a United Nations trust territory, and Somaliland, which had been a British protectorate. The United States immediately established diplomatic relations with the new country. In 1969, the Somali Army launched a coup which brought Mohamed Siad Barre to power. Barre adopted socialism and became allied with the Soviet Union. The United States was thus wary of Somalia in the period immediately after the coup.

Barre’s government became increasingly radical in foreign affairs, and in 1977 launched a war against Ethiopia in hopes of claiming their territory. Ethiopia received help from the Soviet Union during the war, and so Somalia began to accept assistance from the United States, giving a new level of stability to the U.S.-Somalia relationship.

Barre’s dictatorship favored members of his own clan. In the 1980s, Somalis in less favored clans began to chafe under the government’s rule. Barre’s ruthlessness could not suppress the opposition, which in 1990 began to unify against him. After joining forces, the combined group of rebels drove Barre from Mogadishu in January 1991. No central government reemerged to take the place of the overthrown government, and the United States closed its embassy that same year, although the two countries never broke off diplomatic relations. The country descended into chaos, and a humanitarian crisis of staggering proportions began to unfold.

The United Nations attempted to address the crisis with United Nations Operation in Somalia (UNOSOM) to provide humanitarian assistance, created by the United Nations Security Council via Resolution 751 in April 1992. The United States sent food aid via Operation Provide Comfort starting in August 1992. Intense fighting between the warlords impeded the delivery of aid to those who needed it most, and so the United Nations contemplated stronger action. In December 1992, the United States began Operation Restore Hope. President George H.W. Bush authorized the dispatch of U.S. troops to Somalia to assist with famine relief as part of the larger United Nations effort. The United Nations’ United Task Force (UNITAF) operated under the authority of Chapter VII of the U.N. Charter. Chapter VII allowed for the use of force to maintain peace and did not require the consent of the states involved. UNITAF transitioned to UNOSOM II in March 1993. UNOSOM II’s efforts to protect aid deliveries were directly challenged by warlord Muhammad Farah Aideed.

The most significant of these challenges came on October 3, 1993. Aideed’s forces shot down two Black Hawk helicopters in a battle which lead to the deaths of 18 U.S. soldiers and hundreds of Somalis. The deaths turned the tide of public opinion in the United States. President Bill Clinton pulled U.S. troops out of combat four days later, and all U.S. troops left the country in March 1994. The United Nations withdrew from Somalia in March 1995. Fighting continued in the country.

At the same time the Somalia crisis was unfolding, President Clinton ordered the national security bureaucracy to consider how and when the United States should become involved in peacekeeping operations. The resulting document was Presidential Decision Directive 25, issued on May 3, 1994. The Directive outlined a series of factors which the national security bureaucracy must consider before involving the United States in peacekeeping: eight factors which must be weighed before deciding in favor of peacekeeping in the United Nations, and nine additional factors before becoming involved in a Chapter VII action.

Although the United Nations’ involvement in Somalia was unable to provide a solution to the country’s political crisis, the United States remained engaged in responding to the humanitarian needs of the Somali people, and continued to be a significant source of bilateral aid.