On August 15, 1971, President Richard M. Nixon announced his New Economic Policy, a program “to create a new prosperity without war.” Known colloquially as the “Nixon shock,” the initiative marked the beginning of the end for the Bretton Woods system of fixed exchange rates established at the end of World War II. 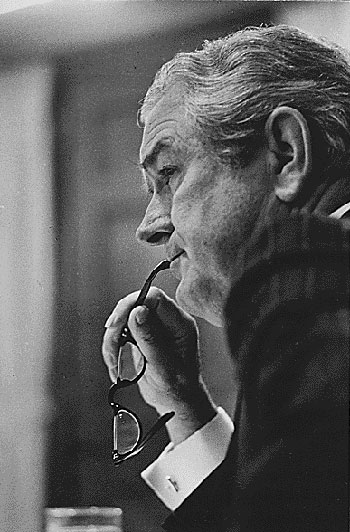 Under the Bretton Woods system, the external values of foreign currencies were fixed in relation to the U.S. dollar, whose value was in turn expressed in gold at the congressionally-set price of $35 per ounce. By the 1960s, a surplus of U.S. dollars caused by foreign aid, military spending, and foreign investment threatened this system, as the United States did not have enough gold to cover the volume of dollars in worldwide circulation at the rate of $35 per ounce; as a result, the dollar was overvalued. Presidents John F. Kennedy and Lyndon B. Johnson adopted a series of measures to support the dollar and sustain Bretton Woods: foreign investment disincentives; restrictions on foreign lending; efforts to stem the official outflow of dollars; international monetary reform; and cooperation with other countries. Nothing worked. Meanwhile, traders in foreign exchange markets, believing that the dollar’s overvaluation would one day compel the U.S. government to devalue it, proved increasingly inclined to sell dollars. This resulted in periodic runs on the dollar.

It was just such a run on the dollar, along with mounting evidence that the overvalued dollar was undermining the nation’s foreign trading position, which prompted President Richard M. Nixon to act. On August 13, 1971, Nixon convened a meeting of his top economic advisers, including Secretary of the Treasury John Connally and Office of Management and Budget Director George Shultz, at the Camp David presidential retreat to consider a program of action. Notably absent from the meeting were Secretary of State William Rogers and President’s Assistant for National Security Affairs Henry Kissinger. After two days of talks, on the evening of August 15, Nixon announced his New Economic Policy in an address to the nation on “The Challenge of Peace.” Asserting that progress in bringing an end to U.S. involvement in the war in Vietnam meant that it was time for Americans to turn their minds to the challenges of a post-Vietnam world, Nixon identified a three-fold task: “We must create more and better jobs; we must stop the rise in the cost of living; we must protect the dollar from the attacks of international money speculators.” To achieve the first two goals, he proposed tax cuts and a 90-day freeze on prices and wages; to achieve the third, Nixon directed the suspension of the dollar’s convertibility into gold. He also ordered that an extra 10 percent tariff be levied on all dutiable imports; like the suspension of the dollar’s gold convertibility, this measure was intended to induce the United States’ major trading partners to adjust the value of their currencies upward and the level of their trade barriers downward so as to allow for more imports from the United States.

A success at home, Nixon’s speech shocked many abroad, who saw it as an act of worrisome unilateralism; the assertive manner in which Connally conducted the ensuing exchange rate negotiations with his foreign counterparts did little to allay such concerns. Nevertheless, after months of negotiations, the Group of Ten (G–10) industrialized democracies agreed to a new set of fixed exchange rates centered on a devalued dollar in the December 1971 Smithsonian Agreement. Although characterized by Nixon as “the most significant monetary agreement in the history of the world,” the exchange rates established in the Smithsonian Agreement did not last long. Fifteen months later, in February 1973, speculative market pressure led to a further devaluation of the dollar and another set of exchange parities. Several weeks later, the dollar was yet again subjected to heavy pressure in financial markets; however, this time there would be no attempt to shore up Bretton Woods. In March 1973, the G–10 approved an arrangement wherein six members of the European Community tied their currencies together and jointly floated against the U.S. dollar, a decision that effectively signaled the abandonment of the Bretton Woods fixed exchange rate system in favor of the current system of floating exchange rates.