President Richard M. Nixon assumed office on January 20, 1969, as an experienced practitioner of foreign policy. He came into the presidency with clear views on the broad objectives of his administration in foreign relations, and with a determination to control major foreign policy initiatives from the White House. During the post-election transition period, Nixon selected Dr. Henry A. Kissinger as his National Security Advisor, and approved a proposal drafted by Kissinger concentrating the interagency policymaking process in the National Security Council. Nixon selected William P. Rogers as the Secretary of State and Melvin R. Laird as the Secretary of Defense. General Earle G. Wheeler served as Chairman of the Joint Chiefs of Staff (CJCS) until July 1970, when he was replaced by Admiral Thomas H. Moorer. The Director of the Central Intelligence Agency, Richard M. Helms, continued in that position, which he had held since 1966. 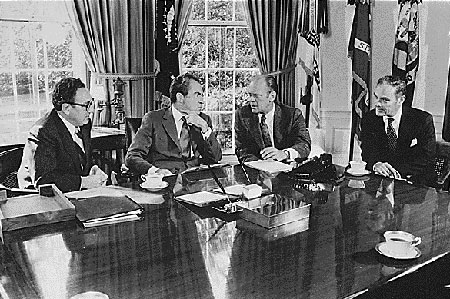 Nixon was a realist, convinced that power was the core dynamic of the international system; while willing to take advantage of summit meetings for political and diplomatic purposes, he was highly skeptical about personal diplomacy. His central concern through his presidency lay in managing great power relationships in the bipolar international system. As the relationship between Nixon and Kissinger matured, they evolved into a close partnership, generally with Nixon laying out the broad outlines of policy and Kissinger helping Nixon work out his thoughts then tirelessly executing the detailed actions necessary to implement broad policy. While Nixon’s major foreign policy initiatives tended to come as great surprises when announced, they had a long-standing basis in his thought and had been worked out well before his inauguration. During the summer of 1967, for example, he spoke at the Bohemian Club in San Francisco, taking the opportunity to outline his thoughts on U.S. relations with the Soviet Union. Similarly, in an article published in Foreign Affairs in October 1967, he emphasized the importance of bringing China into the community of nations.

But the achievement of any of these larger visions, he believed, rested on his ability to reach an honorable end to the Vietnam War. Nixon thought that defeat in that conflict would prolong and deepen the division in the United States, and place the United States in a position of weakness in dealing with the Soviets. He and Kissinger projected that the appearance of American weakness would encourage the Soviet Union to adopt a more aggressive foreign policy, in the end creating the risk of war between the superpowers.

Nixon expected to end American involvement in the Vietnam War within a year, but this hope was dashed when his initial strategy—increasing diplomatic and military pressure on North Vietnam, while offering conciliatory negotiating terms—failed to yield a settlement. He and Kissinger turned to a dual strategy: pursuing a negotiated settlement, while building up South Vietnamese forces and withdrawing U.S. troops, a process known as “Vietnamization” of the war.

The policymaking process became increasingly concentrated and acrimonious through Nixon’s first administration, with Kissinger and Rogers repeatedly clashing over organizational and personal roles. These clashes generally occurred at times of crisis, imposing a cost on Nixon and on the policy process in general. Kissinger’s deputy, General Al Haig, became an increasingly influential advisor to Nixon, especially on issues related to the war in Southeast Asia.

Nixon’s major policy initiatives came to fruition during 1972 and early 1973: the “opening to China” with the Beijing Summit in February, the dawn of détente with the Moscow Summit in May, and the end of American involvement in the Vietnam War in January 1973. By that time, the Watergate scandals had begun to envelope Nixon’s presidency, with increasing costs in distraction, stress, and political weakness during Nixon’s remaining time in office. The Nixon administration also grappled with the consequences of the Arab-Israeli War of October 1973, namely the energy crisis precipitated by the Organization of Arab Petroleum Exporting Countries (OAPEC) oil embargo against the United States.

Nixon’s resignation in August 1974 brought Gerald R. Ford to the presidency. Ford inherited Nixon’s second-term foreign policy team, which had undergone considerable turmoil in previous months. Kissinger succeeded Rogers as Secretary of State on September 21, 1973, and served as both Secretary of State and National Security Advisor. Elliott L. Richardson succeeded Laird as Secretary of Defense in January 1973, and then moved to become the Attorney General in late May. James R. Schlesinger served as Director of the Central Intelligence Agency for six months at the outset of the administration, replacing Helms; he then replaced Richardson as the Secretary of Defense. William E. Colby followed Schlesinger as the Director of the Central Intelligence Agency. General George S. Brown replaced Moorer as the CJCS in July 1974.

Ford emphasized continuity in foreign policy, continuing Nixon’s policy of détente with the Soviet Union and the Strategic Arms Limitation Talks (SALT), reaching broad agreement on the SALT II framework in Vladivostok in November 1974. Along that same line, he continued to develop U.S. relations with the People’s Republic of China, conducting a summit in Beijing in December 1975. He also worked with Kissinger in securing the Helsinki Accords, which were signed in August 1975, and a second Egyptian-Israeli Disengagement Agreement, which was signed in September 1975. The first months of his presidency saw the invasion and conquest of South Vietnam by North Vietnam in March–April 1975, followed quickly by the Mayaguez incident.

Dissatisfied with the performance of his foreign policy team, Ford reshaped it on November 3, 1975. On that day he named Lt. Gen. Brent Scowcroft his National Security Advisor, with Kissinger continuing in his responsibilities as Secretary of State, and Donald R. Rumsfeld replacing James Schlesinger as the Secretary of Defense. Colby was removed as the Director of the Central Intelligence Agency, replaced by George H.W. Bush.

During the last year of Ford’s presidency, Senator Henry Jackson led critics of détente who viewed it as an amoral foreign policy. That criticism fueled a significant challenge to his presidential candidacy from Ronald Reagan. In response, Ford slowed the momentum both toward an arms control agreement, and toward an agreement in the protracted negotiations on the Panama Canal. Ford was defeated by Jimmy Carter in the 1976 election and left office on January 20, 1977.