The 1973 Arab-Israeli War was a watershed for U.S. foreign policy toward the Middle East. It forced the Nixon administration to realize that Arab frustration over Israel’s unwillingness to withdraw from the territories it had occupied in 1967 could have major strategic consequences for the United States. The war thus paved the way for Secretary of State Henry Kissinger’s “shuttle diplomacy” and ultimately, the Israeli-Egyptian peace treaty of 1979. 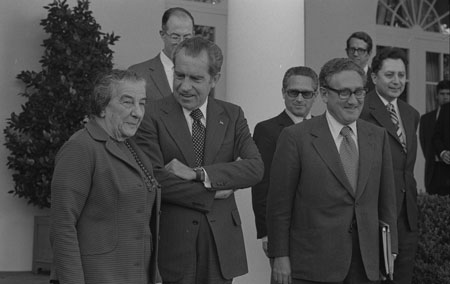 The Nixon Administration and the Arab-Israeli Conflict, 1969–1973

President Richard Nixon came into office convinced that the Arab-Israeli standoff over the fate of the occupied territories could damage America’s standing in the Arab world and undermine prospects for U.S.-Soviet détente. In attempt to break the deadlock, he ordered Secretary of State William Rogers to negotiate with the Soviets on the parameters of a Middle East settlement, with the goal of reaching an agreement that each superpower could sell to its regional clients. By December 1969, however, the Soviet Union, Egypt, and Israel had all rejected the so-called “Rogers Plan,” which called for Israeli to withdraw to the 1949 armistice lines, with “insubstantial alterations,” in return for peace.

The failure of the Rogers Plan led Nixon to suspend efforts to reach a settlement with the Soviets and lent credence to National Security Advisor Henry Kissinger’s argument that the United States should not push Israel for concessions so long as Egypt, the leading Arab state, remained aligned with the Soviets. In the summer of 1970, Nixon broke with Kissinger and allowed Rogers to present a more limited initiative to halt the Israeli-Egyptian “War of Attrition” along the Suez Canal, in which the Soviets had become militarily involved. “Rogers II,” which called for Israel and Egypt to agree to a three month ceasefire and negotiations under the auspices of U.N. mediator Gunnar Jarring, was accepted by both parties, who stopped fighting on August 7. Yet Nixon’s appetite for diplomacy was spoiled by Egyptian and Soviet efforts to move anti-aircraft missiles closer to the Canal and Syrian intervention in Jordan’s civil war. Until February 1971, Kissinger’s arguments against prematurely rewarding Soviet clients again held sway.

In February 1971, however, Egyptian President Anwar Sadat presented the Nixon administration with a new opportunity for Arab-Israeli peacemaking. Sadat proposed that Egypt would reopen the Suez Canal if the Israel Defense Forces (IDF) pulled back from the Canal’s east bank and later agreed to a timetable for further withdrawals. He also indicated that he would renounce all claims of belligerency against Israel if the IDF withdrew to the international border. Rogers’ efforts to capitalize on Sadat’s statements by working toward an interim settlement, however, were opposed by the Israelis, and received little support from Kissinger and Nixon. Kissinger believed that Egyptian proposals for an interim settlement, along with a Soviet peace plan tabled that September, would be rejected by the Israelis, and did not want discord over the Middle East to undermine efforts at détente before the Moscow summit of May 1972. For Nixon, such reasoning was reinforced by a desire to avoid a crisis in U.S.-Israeli relations before the 1972 presidential elections.

In the wake of the Moscow summit, where the Americans and the Soviets deliberately avoided discussing the Middle East, Sadat made two more moves to get the Nixon administration to break the Arab-Israeli stalemate. In July 1972, he decided to expel Soviet military advisors from Egypt, and opened a backchannel to Kissinger through Hafiz Isma‘il, his national security advisor. In February 1973, Isma‘il met with Kissinger and informed him that Egypt would be willing to sign a separate peace agreement with Israel that could involve demilitarized zones on both sides of the international border and peacekeepers in sensitive locations like Sharm al-Shaykh. However, Egyptian-Israeli normalization would have to wait until Israel withdrew from all the territories it had conquered in 1967. The Israelis responded haltingly, and Nixon and Kissinger made little effort to change their minds. Despite Sadat’s public displays of frustration, as well as warnings from Jordan’s King Hussein and Soviet Secretary-General Leonid Brezhnev, Nixon and Kissinger believed that given the military balance, Egypt and Syria would not attack Israel, a view supported by much of the U.S. intelligence community. Until the fall of 1973, the President and Kissinger held that any American diplomatic initiative would have to wait until after Israel’s elections that October.

The War and its Consequences

On October 6, 1973, Egypt and Syria attacked Israel’s forces in the Sinai Peninsula and the Golan Heights. Despite initial Israeli setbacks, Kissinger, now both Secretary of State and National Security Advisor, believed that Israel would win quickly. He feared that a rout of the Arabs could force the Soviets to intervene, raising their prestige in the Arab world and damaging détente. Thus, he proposed that the United States and the Soviet Union call for an end to the fighting and a return to the 1967 ceasefire lines. The Soviets, who were uneager to intervene on behalf of their clients, agreed, but the Egyptians rejected the ceasefire proposal. Wanting to avoid both an Arab defeat and military intervention, the Soviets then began to resupply Egypt and Syria with weapons. By October 9, following a failed IDF counter-attack against Egypt’s forces, the Israelis requested that America do the same for them. Not wanting to see Israel defeated, Nixon agreed, and American planes carrying weapons began arriving in Israel on October 14.

With the American airlift underway, the fighting turned against the Arabs. On October 16, IDF units crossed the Suez Canal. Sadat began to show interest in a ceasefire, leading Brezhnev to invite Kissinger to Moscow to negotiate an agreement. A U.S.-Soviet proposal for a ceasefire followed by peace talks was adopted by the UN Security Council as Resolution 338 on October 22. Afterward, however, Kissinger flew to Tel Aviv, where he told the Israelis that the United States would not object if the IDF continued to advance while he flew back to Washington. When Kissinger returned to the United States, he agreed to a Soviet request to seek another ceasefire resolution, which the Security Council adopted on October 23. Yet the Israelis still refused to stop. On October 24, Brezhnev sent Nixon a hotline message suggesting that the United States and the Soviet Union send troops to Egypt to “implement” the ceasefire. If Nixon chose not to do so, Brezhnev threatened, “We should be faced with the necessity urgently to consider the question of taking appropriate steps unilaterally.” The United States responded by putting its nuclear forces on worldwide alert on October 25. By the end of the day, the crisis abated when the Security Council adopted Resolution 340, which called for a ceasefire, the withdrawal of all forces to their October 22 positions, and U.N. observers and peacekeepers to monitor the ceasefire. This time, the Israelis accepted the resolution.

The 1973 war thus ended in an Israeli victory, but at great cost to the United States. Though the war did not scuttle détente, it nevertheless brought the United States closer to a nuclear confrontation with the Soviet Union than at any point since the Cuban missile crisis. The American military airlift to Israel, moreover, had led Arab oil producers to embargo oil shipments to the United States and some Western European countries, causing international economic upheaval. The stage was set for Kissinger to make a major effort at Arab-Israeli peacemaking.