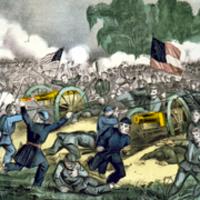 During the Civil War the Confederacy repeatedly sought international support for its cause, often calling upon foreign reliance on its cotton exports to obtain it. The Union, on the other hand, strove to prevent other nations from recognizing the Confederacy as a legitimate nation and from getting involved in the Civil War.

In an attempt to starve the Confederate economy and to cut it off from its international supporters, the Union engaged in a —a move that was of questionable legality in international law. Despite the Confederacy’s significant international commercial ties, the lack of definitive military victories for the South and the success of Union efforts to link the Confederacy with the institution of slavery ultimately prevented any of the European powers from officially recognizing or supporting the South.