The Louisiana Purchase encompassed 530,000,000 acres of territory in North America that the United States purchased from France in 1803 for $15 million. 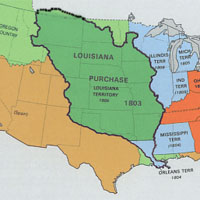 As the United States spread across the Appalachians, the Mississippi River became an increasingly important conduit for the produce of America’s West (which at that time referred to the land between the Appalachians and the Mississippi). Since 1762, Spain had owned the territory of Louisiana, which included 828,000 square miles. The territory made up all or part of fifteen modern U.S. states between the Mississippi River and the Rocky Mountains. The had resolved friction between Spain and the United States over the right to navigate the Mississippi and the right for Americans to transfer their goods to ocean-going vessels at New Orleans. With the Pinckney treaty in place and the weak Spanish empire in control of Louisiana, American statesmen felt comfortable that the United States’ westward expansion would not be restricted in the future.

This situation was threatened by Napoleon Bonaparte’s plans to revive the French empire in the New World. He planned to recapture the valuable sugar colony of St. Domingue from a slave rebellion, and then use Louisiana as the granary for his empire. France acquired Louisiana from Spain in 1800 and took possession in 1802, sending a large French army to St. Domingue and preparing to send another to New Orleans. Westerners became very apprehensive about having the more-powerful French in control of New Orleans: President , “There is on the globe one single spot, the possessor of which is our natural and habitual enemy. It is New Orleans.” 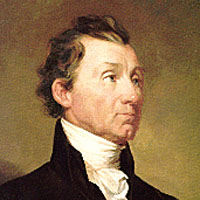 In addition to making military preparations for a conflict in the Mississippi Valley, Jefferson sent James Monroe to join Robert Livingston in France to try to purchase New Orleans and West Florida for as much as $10 million. Failing that, they were to attempt to create a military alliance with England. Meanwhile, the French Army in St. Domingue was being decimated by yellow fever, and war between France and England still threatened. Napoleon decided to give up his plans for Louisiana, and offered a surprised Monroe and Livingston the entire territory of Louisiana for $15 million. Although this far exceeded their instructions from President Jefferson, they agreed.

When news of the sale reached the United States, the West was elated. President Jefferson, however, was in a quandary. He had always advocated strict adherence to the letter of the Constitution, yet there was no provision empowering him to purchase territory. Given the public support for the purchase and the obvious value of Louisiana to the future growth of the United States, however, Jefferson decided to ignore the legalistic interpretation of the Constitution and forgo the passage of a Constitutional amendment to validate the purchase. This decision contributed to the principle of implied powers of the federal government.