In the early part of the 1800s, the United States developed more confidence as an independent nation. 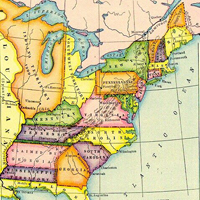 Opportunities to expand westward strengthened the notion that the United States should continue its quest to occupy more territory of the vast North American continent. The European powers did little to stop the young nation from extending its borders as they were embroiled in the ongoing Napoleonic Wars in Europe. Indeed, the economic pressure of these European conflicts compelled the French and the Spanish to sell the Louisiana and Florida territories to the U.S. Government, more than doubling the size of the United States. During this period, the U.S. also built an economy based on trade and commerce, and premised on the same neutrality as outlined by the founders in the Early Republic. The United States even went to war with Britain in 1812, when British actions threatened American neutrality and trading rights. Finally, the United States used the newfound independence of the Latin American states from their former colonial ruler of Spain to establish the idea of an American sphere of influence in the Western Hemisphere and to announce to the European powers the end of the era of colonization in the Americas.