Incidents leading up to the French and Indian War, 1753–54

The French and Indian War, the North American phase of the larger Seven Years’ War, began after a series of incidents in the upper Ohio River valley, which the French and British governments both claimed as their territory. Military forces assembled by both imperial powers built forts in the region and attempted to capture each others’ forts. These skirmishes, which included an expedition led by George Washington, ultimately led to the escalation of a wider, full-scale war between Great Britain and France.

Wanting to limit British influence along their frontier, the French built a string of forts from Lake Erie towards the forks of the Ohio (present-day Pittsburgh). 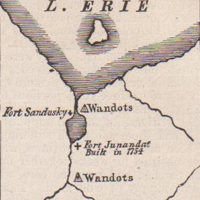 Since the colony of Virginia also claimed this region, Virginian lieutenant governor Robert Dinwiddie sent Major George Washington with a small expedition to order the removal of the French forts in late 1753. Washington arrived at Fort Le Boeuf, about 15 miles inland from present-day Erie, Pennsylvania, and delivered his message. The commander of the fort, Jacques Legardeur de Saint-Pierre, received Washington and his men courteously, but denied the validity of English claims to the contested region. Washington then returned hastily to Virginia, arriving in early 1754, and delivered the French reply to Governor Dinwiddie. Dinwiddie and the legislature agreed that French rejection of British demands constituted a hostile act, and that the French must be driven from their frontier forts on British-claimed land. Dinwiddie sent Captain William Trent of the Virginia militia to construct a fort at the strategically important forks of the Ohio River and to convince the local Indians to ally against the French. Dinwiddie also promoted Washington to the rank of Lieutenant Colonel and ordered an expedition to compel the French to surrender their forts.

While French and British officials maneuvered military forces about, they also attempted to curry favor with American Indians living in the region. The most important group, the Mingoes, were part of the Iroquois Confederation, which was allied with Great Britain. British officials claimed the Iroquois Confederacy had granted a Native American named Tanaghrisson the title of ‘Half-King’ over the Mingoes and other Native communities under Iroquois rule. However, many Indians in the upper Ohio Valley were concerned about British colonists encroaching upon their land, and did not acknowledge either British or Iroquois authority. Although many of them also feared French power and bore grudges against the French from previous wars, the Indians of the upper Ohio valley believed a French alliance to be the lesser of two evils. Consequently, they were amenable to supplying French forces with additional men and intelligence about British movements.

Aided by such reports, the French soon learned of the British fort that William Trent and his small group of men were constructing, and French forces moved swiftly to compel its surrender on April 17, 1754. The French destroyed the unfinished fort, building in its place the much more formidable Fort Duquesne. 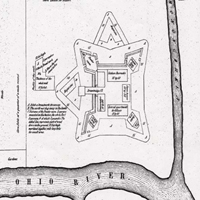 Further south, George Washington, accompanied by Tanaghrisson, surprised an encampment of French soldiers in southwestern Pennsylvania on May 24, 1754. A brief fight ensued, and afterwards the wounded French leader, Ensign Joseph de Jumonville, attempted to explain through translators that the French expedition was on a peaceful mission to warn British forces about their incursions into French-claimed territory. Although accounts of the incident differ, it seems that Tanaghrisson, who bore an intense personal hatred of the French stemming from earlier war experiences, intervened in the negotiations and killed Jumonville. Expecting further French incursions, Washington then hastily constructed a fort and prepared to defend his forces, but a combined French and Indian force forced his surrender on July 3.

Once he heard of Washington’s defeat, Lieutenant-Governor Dinwiddie immediately passed on the news to his superiors in London and called for aid from neighboring colonies. Only North Carolina responded, but refused to make any expenditures outside its own borders. However, British Prime Minister Thomas Pelham-Holles, Duke of Newcastle, reacted swiftly to the news, and planned a quick strike against the French forts before they could be reinforced. King George II approved Newcastle’s plan to send General Edward Braddock to quickly seize French frontier forts.

Other political leaders wanted a bigger war, and so they publicly announced Newcastle’s plans and changed the original plan so that Braddock would command more forces and order the fractious North American colonies to provide additional support against the French. Once the plans had been publicly announced, the French government moved quickly to dispatch reinforcements to North America and further pursued negotiations to diplomatically isolate the British government by winning over its traditional European allies. Once military forces were under way, war was inevitable.