1750–1775: Diplomatic Struggles in the Colonial Period

Colonial era diplomacy focused on two issues: the European balance of power and the colonists’ appropriation of land from the Native Americans. 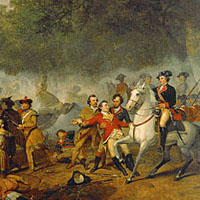 Rivalry in Europe, between the French and the British in particular, often influenced the course of events in their North American colonies.In an effort to increase their political and economic power, the British and the French competed to acquire the better share of the available land and control over the new trading opportunities the colonies presented.

At the same time, the European colonial governments tried to find ways to coexist with the original inhabitants of North America, often making alliances with some tribes while alienating others. Sometimes, as in the case of the French and Indian War (which in Europe was referred to as the Seven Years’ War), European politics regarding balances of power resulted in conflict in the colonies. As wars in Europe became more heated, fighting broke out between the French and the British in the American colonies. Both sides called upon Native American allies to assist them, exacerbating tensions between the tribes, as well as tensions between the tribes and colonists. Ultimately, the British Government found it necessary to pour additional troops and resources into protecting its possessions in the Americas and taxed their colonists to pay for these resources. These taxes eventually became a rallying cry for the American independence movement.