170. Following are our views of significance of four day (Jan 25–29) SED Party Congress:

1.
Gen tone of Congress (viz Pieck’s main address, Congress Manifesto,1 speeches of foreign delegates) did not correspond to Cachin-Togliatti “peace offense”2 but rather heaped new abuse on world and German policy of Western Powers. Reason for gag on relatively mild Tulpanov speech still unclear (mytel 134 Jan 26 rptd Moscow 173).
2.
Congress featured renewed stress on Ger unity theme. While Commies never abandoned this line, Ger unity was pushed somewhat into background after end of UN discussion Berlin crisis.4 At this time Sov propaganda began to concentrate heavily on SovZone Two Year Plan whose basic assumption was that SovZone would function as separate economic unit. This line found its expression in Ulbricht’s speech (on second day of Conference mytel 142 Jan 28 rptd Moscow 195) dealing with econ conditions in which he went so far as briefly to mention Five Year Plan as supplement to present program. But polit address of Grotewohl (on third day of conference mytel 147 rptd Moscow 206) was dominated by unity theme, warning those who think in terms of “beautiful East Germany” that every SovZone policy must be conceived and implemented in terms of “all German future.” Grotewohl defined Ger unity as most important immediate task and as prerequisite to any development toward “People’s Democracy” in any part of Germany. [Page 506]

We feel this renewed surge of unity propaganda may be due to fact that Ruhr Statute, Military Security Board, border rectifications, forthcoming Occupation Statute, and difficulties among Gers and among Western Powers re setting up West Ger govt have provided new stimuli to Commie propaganda at an all-Ger level and that the Commies may feel that such propaganda is making headway. Ulbricht’s remarks re Berlin (mytel 1497) may have been calculated to modify assumptions of inevitable and permanent division in Germany and Berlin, and certainly Stalin interview8 was designed to give appearance of highest-level Sov interest in restoring Ger unity.

3.
Berlin, except for Ulbricht remarks which were handled by Sov-lic press in extremely inconspicuous manner, played a very minor role in business of Congress. Berlin Commies, except for brief and innocuous speeches by Ebert and Jeudretsky, were notably silent. Damper on Berlin may be due fact that it has become uncomfortable issue after West Powers have proved ability effectively to maintain Berlin position. Also SED may have been marking time in anticipation Stalin interview.
4.
Unsatisfactory polit and econ conditions in SovZone clearly revealed during course of Congress. Grotewohl’s admission that “majority of working class not firmly united behind Socialist Party” is convincing confirmation of our opinion that overwhelming majority of SovZone population is in unambiguous opposition to SED/SMA. Also, Grotewohl’s impatient call for intensification of class struggle and Ulbricht’s rather desperate goading of small farmers to seize polit control in the village illustrate Commie difficulties in eliciting polit response from sullen and hostile SovZone population. Ulbricht’s assurance that no second land reform contemplated, even though ambiguous (mytel 142 rptd Moscow 19), should be interpreted as sop to non-Commies who have been increasingly anxious regarding such a possibility. While denial of land reform plans, plus professed adherence to “bloc politics” and lack of interest in developing toward “People’s Democracy” can be regarded as sedatives to bourgeois parties, sharp attacks, especially against LDP “reactionary tendencies,” indicate concern that important elements in SovZone have not yet completely learned the tune. [Page [Charts 7]] 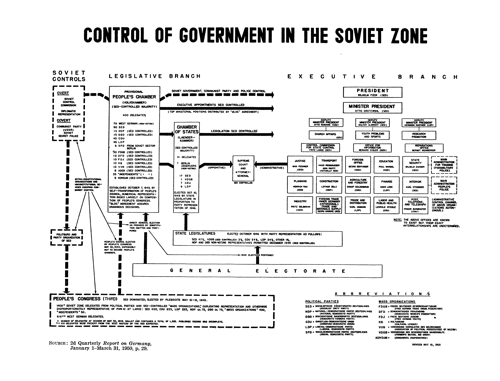 5.
“Party of new type” theme not only represents determination to make SED simon-pure Leninist organization but also illustrates difficulties SED has hitherto been experiencing with its internal organization. Estab of Politburo to coordinate manifold activities of party and principle of “democratic centralism” to insure strict adherence to party doctrine are new efforts (along with previously established party cadre, activist cells, and control agency) to solve dilemma of attempting to be revolutionary party while retaining mass membership, most of which was drawn from old SPD. Abandonment of parity system whereby former KPD and SPD members equally represented at all levels in hierarchy is a decisive effort to root out remaining influence of those who still recall that SED was alleged to be a fusion of Socialists and Commies. Institution of party-candidate system also designed to improve ideological and polit security of SED in situation where, as Grotewohl admitted, “Schumacherism” continues to register successes and SPD “agent activity on increase”. Interesting to note that Congress involved no general or special elections and that apparently Politburo was handpicked and established without any consultation outside of SED elite.
6.
Impressive international representation apparently designed to jack up SED prestige as party which can offer Germany important advantages in foreign policy. Presence of high Czech and Polish functionaries another aspect of Soviet policy endeavoring persuade Czechs and Poles to warm up to Germans. Finally, international representation may have been designed to make SED socially acceptable in Cominform.10 Significantly, there was no mention of any representation from West Germany KPD.

This Congress should be placed in proper relation to other recent Sov or Commie actions. As we see it, “peace offensive” initiated by Cachin and Togliatti has been emphatically negatived by all subsequent public acts except possibly Stalin interview. Formation of Eastern European Economic Bloc, continuing support of Greek rebels (manifested recently by publicity given their delegates at SED Convention here), blast of Soviet Foreign Office Jan 29 against Western Union and Atlantic Pact, as well as unmistakable warning to Norway on same date, all point in direction continuing and even sharpening [Page 508]aggressiveness of Soviet tactics.11 SED Convention belongs in this group of events which spell hostile actions instead peaceful words. It indicated no single recession from Soviet aims on any point, though bringing some shifts in emphasis.