Crisis in the South Atlantic: The Reagan Administration and the Anglo-Argentine War of 1982

Early on the morning of April 2, 1982, Argentine military forces landed on the Falkland Islands (Spanish: Islas Malvinas) in the southern Atlantic Ocean. Argentina had maintained a claim to the islands dating to its independence from Spain in 1816; beginning in 1833, however, the United Kingdom had established a presence on the islands and developed them as a British colony. The issue of the islands’ future sovereignty had been the subject of intermittent and inconclusive negotiations between the two countries since the 1960s. Within hours of the invasion, the Argentines overwhelmed the small British garrison, forcing its surrender. In subsequent days, the military junta led by General Leopoldo Galtieri formalized Argentine control over the territory (as well as over other British South Atlantic possessions in South Georgia and the South Sandwich Islands) and expelled the British administration. British Prime Minister Margaret Thatcher condemned the landings as an act of aggression against the wishes of the islands’ inhabitants who, she argued, favored overwhelmingly continued association with the United Kingdom. She ordered the deployment of a naval task force to the region. 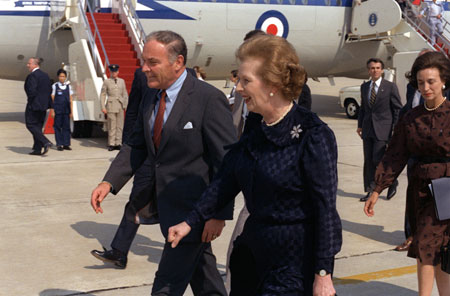 Prime Minister Margaret Thatcher of England is welcomed by Secretary of State Alexander Haig upon arrival for a visit to the United States. (Department of Defense)

Amidst a situation that initially struck some U.S. policy makers as an anachronistic “Gilbert and Sullivan battle,” this crisis presented the Ronald Reagan administration with a formidable foreign policy dilemma. Although the United States had proclaimed its neutrality on the question of the islands’ sovereignty since the mid-nineteenth century, the clash between Argentina and the United Kingdom created conflicts among Reagan’s foreign policy team. Ambassador to the United Nations Jeane Kirkpatrick did not want to alienate the Argentines, regarded by the administration as key partners in halting the perceived expansion of Soviet-directed communist influence in the Western Hemisphere. Secretary of Defense Caspar Weinberger argued strongly to support the British. The United Kingdom was one of Washington’s closest allies and Weinberger feared the administration’s failure to vigorously support the Thatcher government would tacitly condone the Argentines’ actions and encourage other countries to employ similarly aggressive methods. Secretary of State Alexander M. Haig, Jr., argued that Cuba and the Soviet Union stood poised to exploit the crisis and expand their influence in South America if the United States failed to prevent an escalation of hostilities. In such an environment, he advocated an even-handed “honest broker” approach toward both sides.

Containing the crisis and preserving Washington’s relationships with both governments hinged upon the conclusion of a negotiated settlement. Having failed to persuade Galtieri to refrain from landing on the islands, after much internal debate, Reagan dispatched Haig to the United Kingdom and Argentina for talks with Thatcher and Galtieri on April 7. The backdrop to Haig’s mission was ominous: in addition to an increasingly bellicose war of words between the Argentine and British governments, Britain’s mounting military buildup in the region raised the possibility of actual hostilities.

Haig shuttled between London and Buenos Aires for two rounds of intensive discussions over the next fortnight, but failed to broker a peaceful solution. Supported by most Britons, Thatcher insisted on a return to the status quo ante. Any other result would, she believed, imply moral equivalence between the British and Argentine positions, validate Argentina’s aggression, and diminish the islanders’ right to self-determination. Moreover, Thatcher stipulated that no negotiation over sovereignty could occur until Argentine forces withdrew. The Argentine Junta held its own suspicions about U.S. impartiality, refused to make concessions that might prejudice its claims to sovereignty over the islands, and viewed the dispute as a matter national honor. A series of detailed proposals and counterproposals failed to break the diplomatic impasse. Following a successful British operation to retake South Georgia and with growing indications of the Thatcher government’s readiness to seek a military solution, Argentina officially rejected Haig’s final peace proposal on April 29.

The following day, after a meeting of the National Security Council, Haig announced the breakdown of negotiations, administration support for the British position, and the suspension of military and economic aid to Argentina. On May 5, Weinberger met with British Defense Secretary John Nott to finalize arrangements for the fulfillment of British requests for military materiel as part of a broad range of political, diplomatic, and military measures undertaken by the United States in support of the Thatcher government.

Despite this public tilt toward the British position, the Reagan administration continued its efforts to control the conflict and to mitigate the fighting’s impact upon U.S. interests. Indeed, most Latin American countries viewed U.S. support for Britain as a betrayal of the hemispheric solidarity embodied in the 1947 Inter-American Treaty of Reciprocal Assistance (the Rio Treaty). In addition to offering broad support for peace initiatives undertaken by the Peruvian president and U.N. General Secretary Javier Pérez de Cuéllar, the administration pressed the belligerents to draw down their military engagement. Ambassador-at-Large General Vernon Walters met secretly with the Argentine Junta, while Reagan attempted to personally intercede with Prime Minister Thatcher. Over the course of two tense telephone conversations in late May, Reagan failed to persuade Thatcher to refrain from “scoring total victory” in the South Atlantic in order to avoid toppling the Junta.

British victory in the field brought an end to the 1982 Falklands/Malvinas crisis. Following a three-week ground campaign, British forces re-captured the islands’ capital, Port Stanley, on June 14, forcing the surrender of all Argentine troops. Three days later, Galtieri resigned as Argentine president, the first step in the eventual return of civilian government to Argentina.