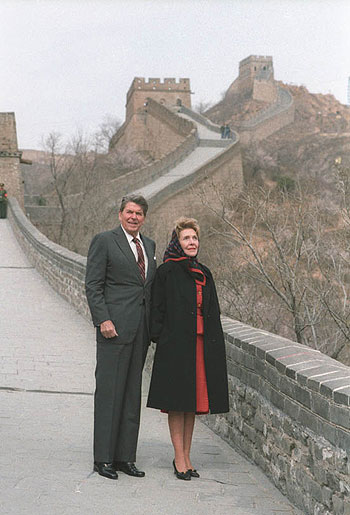 The administration of President Jimmy Carter formally normalized relations with the People’s Republic of China on January 1, 1979, but the perpetually divisive issue of U.S. arms sales to Taiwan remained unresolved. On the one hand, officials in the Carter administration and the incoming administration of President Ronald Reagan, along with majorities in Congress, agreed that the United States should not end arms sales to Taiwan. On the other hand, PRC officials insisted that the continuation of such sales was a violation of their country’s sovereignty and justification for downgrading relations with the United States. Making matters more contentious, the Taiwan Relations Act of April 1979 required the United States to continue to sell defensive arms to Taiwan; PRC officials saw the law as a direct challenge to the normalization agreement finalized a few months earlier. U.S. and PRC officials both recognized that if the two sides could not establish a modus vivendi on the future of U.S. arms sales, U.S.–PRC relations could retrogress or collapse entirely.

In January 1982, the United States and the People’s Republic of China commenced official discussions on U.S. arms sales to Taiwan. As the two sides began exchanging drafts of a potential communiqué, two major disagreements were immediately apparent. The first area of discord was the nature of future U.S. arms sales to Taiwan. The People’s Republic of China insisted that the United States eventually, and relatively quickly, end all arms sales. While the Reagan administration was prepared to place qualitative and quantitative limits on its future arms sales, and gradually to reduce those sales over time, it was unwilling to commit itself to the termination of such transactions. The second dispute centered on the nature of PRC policy toward Taiwan. The Reagan administration stated that arms sales reductions were contingent on a PRC policy of maintaining peaceful relations with Taiwan. PRC officials, however, refused to make any official commitments to the United States on their future policy toward Taiwan, arguing that doing so would be a challenge to their country’s sovereignty.

In May 1982, with negotiations largely stalled due to these significant disagreements, Reagan suggested that Vice President George H.W. Bush travel to Beijing to meet with high-level officials. Bush was not traveling to China to engage in detailed communiqué negotiations, but U.S. officials hoped that his visit would, nonetheless, jumpstart the languishing talks and convince PRC officials that the United States was committed to reaching an agreement. Bush met with several high-level Chinese officials, including the leader of the People’s Republic of China, Deng Xiaoping, and discussed a wide range of issues affecting U.S.–PRC relations. In addition, during Bush’s trip the White House publicized three letters from President Reagan—to Deng, Premier Zhao Ziyang, and Communist Party Chairman Hu Yaobang—that stressed the importance of U.S.–PRC relations, recognized the significance of the People’s Republic of China’s peaceful approach to the Taiwan issue, and reinforced Reagan’s willingness to reduce U.S. arms sales to Taiwan if the People’s Republic of China maintained its peaceful policy. The visit marked a turning point in the communiqué negotiations, largely because it confirmed the personal involvement of both Deng and Reagan in the ongoing talks. Both leaders, it was clear, wanted and anticipated a speedy and successful conclusion to the communiqué negotiations.

By the end of July, after several weeks of intense internal discussions in both Washington and Beijing, U.S. and PRC officials had worked out many of the communiqué’s most vexing problems. Chinese officials dropped their insistence that the United States agree to a “date certain” for the termination of all arms sales to Taiwan and the two sides found agreeable language that combined the People’s Republic of China’s commitment to maintaining peaceful relations toward Taiwan with the United States’ respect for China’s sovereignty.