In the 1770s, the increasingly defiant American colonies began to work toward political independence from the British Government. 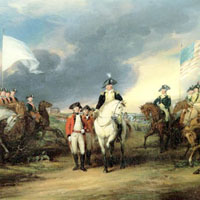 Tensions continued to escalate until, in 1775, armed conflict erupted. The colonists, who were economically dependent on Europe, recognized that European nations were unlikely to conclude trade agreements with the Americans unless they declared their independence. The U.S. Continental Congress endorsed Thomas Jefferson’s Declaration of Independence on July 4, 1776, and, with the endorsement of this document, the conflict with Great Britain became a full-fledged War of Independence.

Unable to defeat the strong British military on their own, the American colonists required foreign assistance. John Adams approached the French with the “Model Treaty,” which protected neutral trade and shipping rights in the event of a war. The French decision to sign this commercial treaty with the American colonists made France an implicit ally in the war against Great Britain.

In 1778, France formally established its position as an ally with a treaty of alliance that committed the French to the war on the condition that the Americans did not seek a separate peace with Great Britain. Following the British surrender at the Battle of Yorktown, the Americans negotiated independently with Great Britain despite their agreement with France. The war was not officially concluded, however, until the agreement to the Treaty of Paris in 1783, which was signed in concert with treaties between Great Britain, France, and Spain. The final treaty granted full independence and recognized the borders of the new United States of America.