Benjamin Franklin, the most distinguished scientific and literary American of the colonial era, was the first American diplomat. 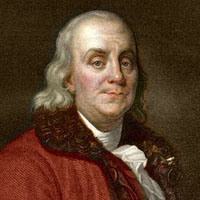 Franklin served from 1776 to 1778 on a commission to France charged with the critical task of gaining French support for American independence. French aristocrats and intellectuals embraced Franklin as the personification of the New World Enlightenment. His likeness appeared on medallions, rings, watches, and snuffboxes, and fashionable ladies adopted the "coiffure a la Franklin" in imitation of the fur cap he wore instead of a wig. His popularity and diplomatic skill—along with the first American battlefield success at Saratoga—convinced France to recognize American independence and conclude an alliance with the thirteen states in 1778. Franklin presented his credentials to the French court in 1779, becoming the first American Minister (the eighteenth century American equivalent of Ambassador) to be received by a foreign government. Franklin’s home in Passy, just outside Paris, became the center of American diplomacy in Europe. When Thomas Jefferson succeeded Franklin in 1785, French Foreign Minister Vergennes asked: “It is you who replace Dr. Franklin?” Jefferson replied, “No one can replace him, Sir; I am only his successor.”