48. Memorandum From Secretary of Defense Schlesinger to President Ford 1

In light of the recent SALT agreements,2 I believe it is important to inform you as to our future course in U.S. strategic forces, options for the future, and the costs of these forces and options.

Our current plans and five year budgets call for the following programs to be pursued:

• Strategic Bombers. We currently have a total of 533 B–52s of which 352 are in active status, 71 are in special storage at active bomber bases, and 110 are in mothball status at Davis Monthan AFB, Arizona. In view of the increasing number of strategic nuclear weapons going on day-to-day alert and the unlikely nature of a surprise attack, we are planning to reduce the day-to-day alert of our strategic bombers and tankers while maintaining a full capability to generate the force to an alert level appropriate to the intensity of the crisis. Commensurate with the bomber alert rate reduction and our total force concept, we are planning to transfer up to 128 KC–135 tankers from the active force to the Reserve Components.

The B–1 3 is currently being developed to maintain bomber force effectiveness in the face of qualitative improvements in Soviet air defenses (not limited by the SALT agreements), to create uncertainty in Soviet attack and defense planning, and to force large air defense expenditures which could otherwise be diverted to other more worrisome Soviet programs. If the B–1 flight test is successful, we would plan to initiate production in November 1976 and obtain first delivery in 1979. We are planning for a total of 241 B–1s to be deployed by 1984.

• Intercontinental Ballistic Missiles (ICBMs). We currently have a total of 1,000 Minuteman and 54 Titan II missiles and launchers. We currently plan to deploy 600 Minuteman III MIRVed missiles, maintain 400 Minuteman II (single RV) and 54 Titan II (single RV) missiles, and continue a Minuteman silo hardness upgrade program to increase the nuclear hardness of the current Minuteman silos. [3½ lines not declassified] Although increasing the flexibility of our Minuteman force, these improvements will not give the U.S. a disarming first-strike capability.

• Submarine-Launched Ballistic Missiles (SLBMs). We currently have 41 strategic nuclear submarines with a total of 656 SLBM launchers, of which 10 submarines and 160 launchers are the older model Polaris systems. Our current plans call for commencing phase-out of these older submarines with the deployment of the first Trident submarines and missiles in 1979 and potential phase-out of the older Poseidon with Trident in the mid-1980s. Retaining 600 Minuteman IIIs will permit up to 720 SLBM MIRV launchers for our SLBM force. This level could be [Page 225]obtained by a force of 10 Trident (240 missiles) and 30 Poseidon (480 missiles) by 1985.

• Strategic Defense. In strategic defense we are continuing an R&D program in ballistic missile defense technology within the provisions of the ABM Treaty. Consistent with new priorities and objectives, we are realigning and reducing our air defense force to attain primary missions of: (a) surveillance and peacetime control of U.S. airspace, and (b) providing warning of a bomber attack.

Our strategic offensive forces, when maintained and modernized according to our current plans, will permit us to achieve the limits of the SALT provisions in a manner shown in Figure 1.

Within the current strategic force plans, we would:

—reach a level of 1320 MIRVed missile launchers by 1983 roughly the same time the Soviets could reach that level, based on the CIA “Best Estimate” threat.

We have programs in research and development which will permit further strategic force improvements and modernization if we elect to deploy them in the future. These future options include:

• Deployment of an improved throw-weight missile (3 to 3½ times the throw-weight of Minuteman) in an existing Minuteman silo or a mobile configuration. This program is called M–X and is under consideration for 1985 deployment.

• Deployment of a follow-on Trident missile with greater range/throw-weight capability.

• Deployment of improved accuracy and/or higher nuclear yield warheads on some portion of our ICBM and/or SLBM force.

Our current funding plan for deployment of our strategic forces and maintenance of R&D options for the future are shown in the table below:

There are other elements of our defense budget which can be attributed to strategic forces—training, base operating support, maintenance, command, intelligence and security, etc.—but which are not included in the above direct costs and which do not necessarily vary with direct costs. Depending upon how these costs are allocated to strategic forces, the total costs could increase to $14–20 billion in FY 75. The $18 billion figure about which you were questioned in your news conference of December 2, 19745 apparently is the $18.3 billion figure identified in a Brookings Institute critique of the FY 75 budget6, which allocated all defense costs to only three types of forces: General Purpose, Strategic Nuclear, and Strategic Mobility.

In summary our current five year plan for strategic forces calls for small increases in total funding through FY 80 (excluding inflation on major procurement which accounts for about 50% of the increases for FY 76 to FY 80), aiming at modernization of our bomber and SLBM forces and options to modernize our ICBM forces (including mobility options) in the 1980s. These expenditures are consistent with, and the reasonable minimum associated with, the new strategic arms limitation agreements. In short, these new agreements result in virtually no change from an already constrained five-year plan. The only uncertainty lies in our ability to adequately fund for this modernization and maintaining an adequate force in light of unanticipated inflation or cost growth.

Chart Prepared by the Office of the Secretary of Defense 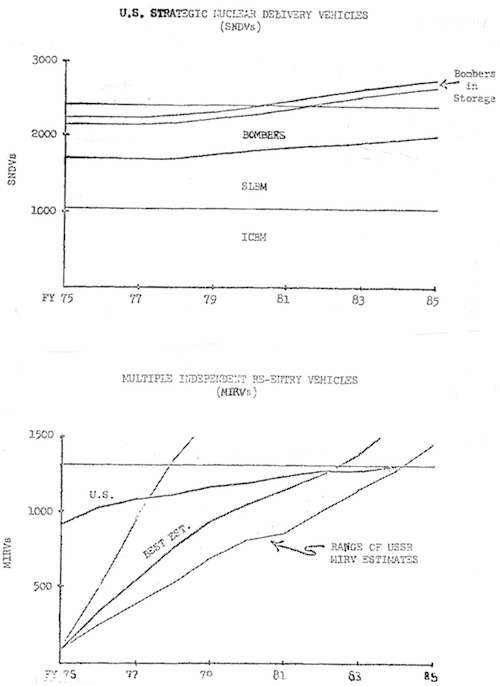