A Dollar Comparison of Soviet and US Defense Activities 1965–1975

Problems in Comparing US and Soviet Programs

The military establishments of the Soviet Union and the US are difficult to compare because they differ so much in missions, structure, and characteristics. Any common denominator used for comparative sizing is inevitably imperfect, and its limitations must be understood in interpreting such comparisons.

Dollar Cost Comparisons. The common denominator used in this report is dollar cost. The approach is to estimate how much it would cost in dollars to reproduce individual Soviet military programs in the US, [Page 733]and then to compare these estimates with expenditure data of the Department of Defense.2

The utility of this approach is that it provides a general appreciation of the overall sizes of defense programs in the two countries. It also reveals trends and relationships between the two defense establishments that are difficult to discern and measure in other ways.

Whatever conclusions are drawn from this dollar cost analysis, however, must be tempered by an appreciation of what it does not do. It does not, for example, measure actual Soviet defense expenditures or their burden on the Soviet economy. These questions are addressed by totally different analytical techniques yielding estimates of the ruble costs of Soviet military programs. Neither can the dollar cost analysis alone be used to draw inferences about the relative military effectiveness or capabilities of US and Soviet forces.

Some activities funded by defense budgets contribute only indirectly to military capabilities—for example, pensions, medical care for dependents, and commissaries—and such activities are likely to be larger in the US than in the Soviet Union. Even those comparisons that focus on costs that contribute directly to capabilities—for example, procurement of weapons—are not necessarily indexes of relative military capabilities. Data on the size and technical characteristics of the forces must also be considered for such judgments.

Finally, dollar cost calculations tend to overstate Soviet programs relative to the US because of a basic measurement problem common to all international economic comparisons and known to economists as the index number problem. If Soviet decision makers were confronted with the US dollar price structure that is used for our dollar cost analysis, rather than the ruble prices they in fact have to pay, they undoubtedly would choose a different and cheaper (in dollar terms) mix of manpower and equipment inputs. While it is not possible to quantify the degree of overstatement that this consideration introduces, it is clearly not large enough to alter the basic conclusion that the Soviet military program overall is currently significantly larger than that of the US.

Price Basis and Structure of Comparisons

The dollar cost data presented here for the years 1965–1975 are expressed in constant prices so that all changes in monetary levels from [Page 734]year to year reflect changes in forces and programs rather than the effects of price fluctuations. The base year used is 1974.

The US data have been adjusted to achieve comparable accounting coverage with the dollar estimates made for the USSR as well as converted to constant prices, and therefore do not match actual budget authorizations or appropriations.

—DoD authorizations for military aid and civil defense are excluded and those for military research, development, testing, and evaluation (RDT&E) have been aggregated into one account.

The estimated total dollar costs of Soviet defense programs exceed US defense authorizations in every year since 1970. At about 114 billion dollars (1974 prices), they are more than 40 percent higher than comparable US authorizations of 80 billion dollars in 1975. (See Figure 1.) If the costs of pensions are subtracted from both sides, the dollar costs of Soviet programs in 1975 exceed those of the US by 50 percent.

When expressed in constant US prices, which measure growth in real terms, the trend in the dollar costs of Soviet defense programs is one of continuous growth throughout the period averaging about 3 percent per year. This growth is evident in nearly all the major components of the Soviet defense establishment. Quite a different picture is seen for the US. Despite increases in the current dollar costs of US defense programs, defense authorizations expressed in constant dollar terms have declined continuously since the peak of 1968, and since 1973 have been below the 1965 level. This decline reflects reductions in nearly every major US force component in the Seventies, in contrast to the Vietnam buildup of the late Sixties. For the 1965–1975 period as a whole the estimated dollar costs of Soviet programs are not significantly different from cumulative US authorizations. In the Seventies the Soviet total exceeds that of the US by 20 percent.

In Figure 1, the costs of RDT&E are segregated from those of other programs. This is because the analytical problems involved in estimating the dollar costs of Soviet RDT&E are much more difficult than for the other elements of the Soviet defense establishment and the uncertainty in these estimates is substantially higher. If the dollar costs for RDT&E are subtracted from both sides for the year 1975, the estimated Soviet figure is 40 percent higher than that of the US. 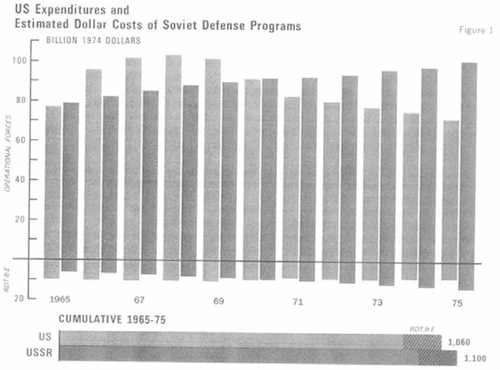 NOTE: The dollar figures for the USSR are estimates of what the Soviet forces and programs would cost if developed, purchased and operated in the US. For operational forces the figures are obtained by costing directly individual Soviet forces and programs. The estimated dollar costs of Soviet RDT&E are derived in the aggregate using a less certain methodology and should be viewed only as rough measures. For this reason they are shown separate from the dollar costs of operational forces. The US defense expenditure series is based on Total Obligational Authority (TOA) data from The Five-Year Defense Program, January 1976 (Department of Defense). The US data are in fiscal year terms and the estimated dollar costs of Soviet programs are in calendar year terms.

NOTE: The manpower series for the USSR includes border guards, internal security troops, and construction troops, for which the US Armed Forces have no counterpart.

[Page 736]grows by about one million men during the period. Most of this increase is in the ground forces, although there are some increases in strategic forces as well. On the other hand, US manpower in 1975 was less than its 1965 level.

The Soviets have historically maintained a large military force which has a broader range of responsibilities than the military does in the US. The Soviet manpower series includes border guards, internal security troops, and construction troops, forces for which the US has no counterparts. Even without these forces, however, the Soviet manpower total is higher than that of the US throughout the period.

Intercontinental Attack Forces. Estimated dollar costs of Soviet intercontinental attack programs, excluding RDT&E, exceed the US figures for every year beginning in 1966, when most of the currently deployed US systems were operational. (See Figure 2.) For the 1965–1975 period as a whole, the estimated dollar costs of Soviet programs are 50 percent greater than the US level. In the Seventies they are 70 percent greater and in 1975 they exceed the US level by 100 percent.

—The estimated dollar costs of Soviet submarine-launched ballistic missile (SLBM) programs exceed US levels for every year beginning in 1968 and are 30 percent greater than those for the US in 1975.

If the estimated dollar costs of Soviet peripheral attack forces intended for use on the Eurasian continent are counted, the cumulative dollar costs of Soviet strategic attack programs for the 1965–1975 period are more than twice the cumulative US level. The US has no counterpart for the Soviet peripheral attack forces, which include large numbers of medium- and intermediate-range ballistic missiles and medium bombers.

Strategic Defense Forces. The USSR has traditionally maintained much larger strategic defense forces than the US. The cumulative dollar costs of Soviet programs over the 1965–1975 period are four times the US figure, the biggest difference being in surface-to-air missile ( SAM) and fighter-interceptor programs. US authorizations for the Safeguard ABM system narrow the gap somewhat in the early Seventies. Recent reductions in US air defense programs account for the widening gap since that time. In 1975, the estimated dollar costs of Soviet strategic 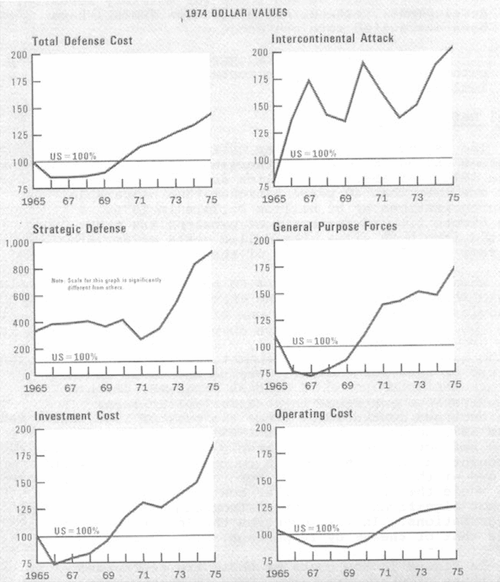 * Department of Defense Total Obligational Authority data have been adjusted to attain comparability with the Soviet data.

[Page 738]defense programs amount to nine times the US authorizations for strategic defense.

General Purpose Forces. The estimate of dollar costs of Soviet general purpose forces increases continuously from 1965 through 1975. The US level, in contrast, grew rapidly during the Vietnam involvement but had returned to the 1965 level by 1971. As a result, the estimated dollar costs of Soviet general purpose forces surpass the level of the US in 1970, and for the Seventies as a whole, they are 40 percent greater than the US total. In 1975 they exceed the US level by 70 percent.

Command, Support, and Other. This mission covers activities involved in command and general support, as well as all other activities—except RDT&E—which cannot be assigned to the combat missions. It also includes nuclear weapons programs. The trends in dollar costs for this mission parallel those of the combat missions, and in 1975 the dollar costs for Soviet programs are slightly higher than the US.

Dollar costs of military forces can also be compared in terms of investment and operating costs.

—During the last few years the dollar procurement costs of Soviet aircraft have remained high while those of the US have declined. In 1975 the Soviet figure is some 30 percent higher.

—The cumulative estimated dollar costs of Soviet procurement for naval ships and boats exceed the US figure by 70 percent over the 1965–1975 period and are about 90 percent greater than the US in 1975.

Estimates of the dollar costs of Soviet defense programs are revised each year to take into account new information on and new assessments of the size, composition, and technical characteristics of the Soviet forces and to put them on a more current dollar price base. The dollar cost comparisons presented in this report show the costs of Soviet programs to be higher relative to the US than previous estimates.

These changes for 1974 and 1975 occurred for a number of reasons. One factor was a downward revision in US authorizations for both years in the January 1976 edition of The Five Year Defense Program reflecting more recent information. On the Soviet side, the estimates presented in this report differ from those of the earlier studies principally because of changes in the estimated costs of some weapons and activities. Changes in the Intelligence Community’s estimates of the number of deployed weapon systems—particularly in the later years—also contributed to the increase, but to a lesser extent. The Intelligence Community also increased its estimate of Soviet military manpower since the last comparative cost analysis. This increase was nearly offset, however, by a decrease in the estimated number of civilians working for the Soviet Ministry of Defense.