Sir: I transmit herewith a copy of a letter32 from General Hilldring33 and a copy of the enclosure thereto which it is believed are self-explanatory. It will be observed that the memorandum from the Joint Chiefs of Staff delineates the zones to be occupied in Germany by American, British, and Soviet forces and that it was prepared on December 4, 1943. This document is transmitted to you for your consideration and for your recommendations with regard to it.

1.
In developing his plans for Rankin, COSSAC has submitted a recommendation (paragraph 11, C.C.S. 320/2)36 that under the general direction of the Supreme Allied Commander the territories to be occupied should be divided into two spheres, the British sphere, including northwest Germany, Belgium, Luxembourg, Holland and Denmark, and the U.S. sphere, generally southern Germany and France, with Austria a U.S. sphere, initially under the Mediterranean command. It is understoood that planning by COSSAC is now proceeding on this basis.
2.
The U.S. Chiefs of Staff now propose that these spheres be changed as follows:37

a.
U.S. sphere. The general area Netherlands, Northern Germany as far east as the line Berlin-Stettin, Denmark, Norway and Sweden. The boundary of this area is to be as follows: Southern boundary of the Netherlands; thence to Duesseldorf on the Rhine; down [up] the east bank of the Rhine to Mainz; thence due east to Bayreuth; thence north to Leipzig; thence northeast to Cottbus; thence north to Berlin (exclusive); thence to Stettin (inclusive).
b.
British sphere. Generally the territory to the west and south of the American western boundary.

2 [3].
The U.S. Chiefs of Staff further propose that COSSAC be directed to examine and report on the implications of revising his planning on the basis of the new allocation of spheres of occupation. 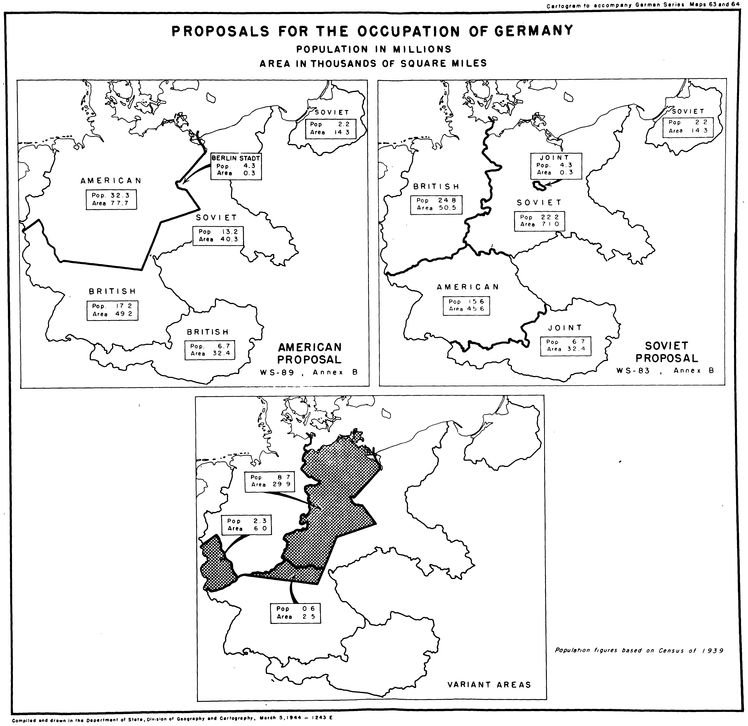