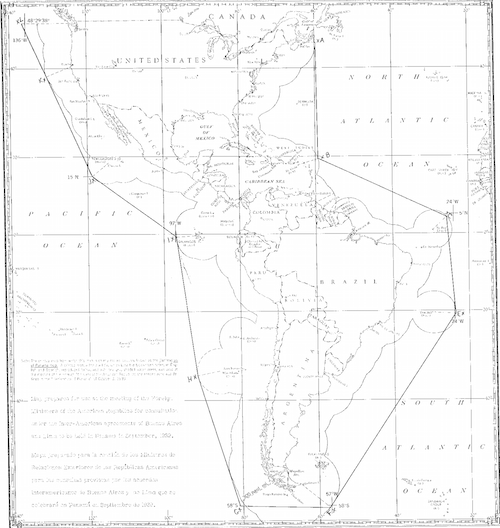 The history of the Declaration of Panama map, preceding the meeting of the Foreign Ministers of the American Republics in Panama, follows:

At the request of the Division of the American Republics in the State Department the Office of the Geographer laid down on National Geographic Society maps of the Western Hemisphere, at different times, the limits of waters within 500, 700, 1,000 and then finally 300 nautical miles of all of the 21 American Republics, including their island possessions—and excluding Canada, Newfoundland, and the colonies of European countries in the Americas. The 300-mile limit was regarded as being adequate, and the arcs of 300-mile radius were then laid down on a U. S. Hydrographic Office chart of the world, taking into account the latitude variations in scale oh the Mercator chart. That chart, with only the 300-mile arcs (as shown within the shaded areas on the accompanying map) was sent to President Roosevelt.

The President selected turning points of a provisional zone, which he identified with small “x” marks in pencil, and lettered them from “A” to “L”. He then drew straight lines with a ruler between those points. The map was returned to the geographer of the Department with a request that the zone provisionally laid down by President Roosevelt be shown on a well drafted map, and described textually. In order to facilitate description some of the turning points were slightly moved. The parallels of latitude serving as northern limits of the zone, on both the Atlantic and Pacific sides, are the latitudes of the termini of the U. S.-Canada boundary, as defined in the joint reports of the Boundary Commissioners; all of the other turning points were assumed to be points at integral numbers of degrees nearest the President’s lettered turning points. The limits of the gray shaded areas, on the accompanying map, precisely coincide with the lines thus modified from the President’s preliminary lines. Wherever the limiting lines do not follow a meridian or a parallel they are defined as “rhumb lines,” which means that they follow a continuous true compass course between the points concerned, and that the lines are straight lines on a Mercator projection.

The textual description of the zone is given in the Declaration of Panama, printed on .

It will be noted that there was no point “D” on the map in President Roosevelt’s notation. Also that the point “H” was ignored in laying down the modified limits; the 300-mile arc beside which President Roosevelt marked “H” had been incorrectly laid down by the draftsman, from a spot on the map which had been mistaken for the Chilean island “Mas Afuera.” The Hawaiian Islands, two Chilean islands, Easter Island and Sala y Gomez Islands, and other distant islands, were ignored in laying down the 300-mile arcs on which the zone was based.

The waters within three nautical miles of Bermuda, Jamaica, the Guianas, and other European territorial possessions were excluded from the zone described in the Declaration of Panama. They could not be excluded from the shaded area of the map because of the smallness of the scale.

The map, as printed and sent to Panama for use at the meeting of the Foreign Ministers, showed the shaded area, with the latitude and longitude of turning points, and the English and Spanish notes, as shown on the accompanying map, but without the 300-mile arcs there shown, and without the “x” marks and letters which had been added (on another map) by President Roosevelt.