The World in the mid-19th Century - Short History - Department History

The World in the mid-19th Century

After the Civil War, Americans took advantage of the stable international balance of power to continue the dynamic process of westward expansion and building a strong and powerful economy. There were few changes in nation’s basic foreign policies; the overarching principles of isolation and neutrality generally remained firmly entrenched. 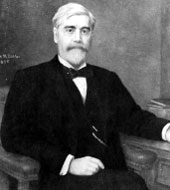 Secretary of State Walter Gresham
In 1894, Secretary of State Walter Q. Gresham of Illinois reaffirmed Washington’s “great rule of conduct” in commenting on what he deemed a questionable departure from the policy of “no entangling alliances”—an agreement with Germany and Great Britain to share control of the Samoan Islands. “Every nation, and especially every strong nation, must sometimes be conscious of an impulse to rush into difficulties that do not concern it, except in a highly imaginary way,” he noted.

The continuing national focus on domestic issues does much to explain why, despite its numerous flaws, the conduct of foreign relations continued unchanged. As late as 1894, an observer noted that the public was “less familiar with the duties of our diplomatic and consular agents than any other branch of the public service.” In a sense, this was logical, because diplomatic work was carried out overseas, where it could not be observed.

For most of the period, diplomacy remained mired in the past. The biographer of Secretary of State John Hay later described the Department in 1898 when Hay became Secretary as “an antiquated feeble organization, enslaved by precedents and routine inherited from another century, remote from the public gaze and indifferent to it. The typewriter was viewed as a necessary evil and the telephone was an instrument of last resort.”