Xenophobic Americans regularly condemned their representatives abroad as subversive, and some cast doubt upon the need for any contact whatsoever with the Old World and its representatives. 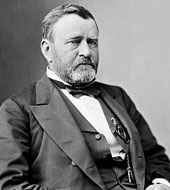 President Ulysses S. Grant
In 1885, for example, Senator William E. Robinson of New York insisted “…this diplomatic service is working our ruin by creating a desire for foreign customs and foreign follies. The disease is imported by our returning diplomats and by the foreign ambassadors sent here by monarchs and despots to corrupt and destroy our American ideals.” The Senator's solution was to quarantine entering diplomats “as we quarantine foreign rags through fear of cholera.”

Another familiar pattern transcended the Civil War—meddlesome political interference with the Department of State and a tendency to see its overseas posts as rewards for loyalty not talent. In 1869, for example, President Ulysses S. Grant made Elihu B. Washburne, a friend from Galena, Illinois, the Secretary of State for 12 days so that he could enjoy the prestige of the position when he took up his responsibilities as Minister to France. Washburne's successor, Hamilton Fish of New York, found that he could not resist political pressure and administer the Department efficiently without strong presidential support. When General Orville Babcock, another of Grant's friends, tried to interfere, Fish bluntly informed the President that he could not tolerate such activities. If the President showed lack of confidence in him, he wrote, “or when the influence of the head of the Department in the administration of its affairs, or the formation of its policy, is overshadowed by others, a sensible or sensitive man will appreciate that the time for his retirement has arrived.”