Biographies of the Secretaries of State: Bainbridge Colby (1869–1950)

President Woodrow Wilson appointed Bainbridge Colby as his third Secretary of State on March 23, 1920. He was confirmed by the Senate and entered into duty the same day. Colby served until the end of the Wilson administration, leaving office on March 4, 1921. 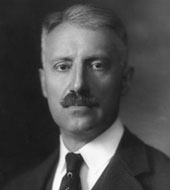 Colby was born in St. Louis, Missouri to a prominent New York family. He graduated from Williams College in 1890 before attending Columbia University Law School for one year. He completed his legal studies at New York Law School in 1892 and began to practice in New York upon admittance to its bar.

A successful lawyer, Colby joined the Republican Party and was elected to the New York State Assembly. Colby left the party in 1912 and helped form the Progressive Party. In 1916, he publicly supported the reelection of President Wilson in a stirring speech that began a lifetime friendship between the two.

President Wilson and Secretary of State Colby shared many of the same views on the conduct of U.S. foreign policy. However, Colby entered office during the challenging last years of the Wilson administration.

Despite Colby’s efforts, the Senate refused to ratify the Versailles Treaty following World War One and contested U.S. membership in Wilson’s League of Nations.

Colby experienced more success in his approach towards the new government of the Soviet Union. He formulated a non-recognition policy toward the Soviet Union based on its promotion of international communism and the threat it posed to existing governments.

Audiences warmly received the Secretary of State and approved of his willingness to publicly discuss the merits of the Monroe Doctrine. Colby convincingly argued that the doctrine was not imperialistic, but rather promoted democracy throughout Latin America.

Colby left office at the end of the Wilson administration in 1921 and returned to private practice. Colby died on April 11, 1950.