The Paris Peace Conference and the Treaty of Versailles

The Paris Peace Conference convened in January 1919 at Versailles just outside Paris. The conference was called to establish the terms of the peace after World War I. Though nearly thirty nations participated, the representatives of the United Kingdom, France, the United States, and Italy became known as the “Big Four.” The “Big Four” dominated the proceedings that led to the formulation of the Treaty of Versailles, a treaty that ended World War I.

The Treaty of Versailles articulated the compromises reached at the conference. It included the planned formation of the League of Nations, which would serve both as an international forum and an international collective security arrangement. U.S. President Woodrow Wilson was a strong advocate of the League as he believed it would prevent future wars. 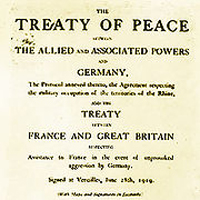 Negotiations at the Paris Peace Conference were complicated. The United Kingdom, France, and Italy fought together as the Allied Powers during the First World War. The United States, entered the war in April 1917 as an Associated Power. While it fought alongside the Allies, the United States was not bound to honor pre-existing agreements among the Allied Powers. These agreements focused on postwar redistribution of territories. U.S. President Woodrow Wilson strongly opposed many of these arrangements, including Italian demands on the Adriatic. This often led to significant disagreements among the “Big Four.”

Treaty negotiations were also weakened by the absence of other important nations. Russia had fought as one of the Allies until December 1917, when its new Bolshevik Government withdrew from the war. The Bolshevik decision to repudiate Russia’s outstanding financial debts to the Allies and to publish the texts of secret agreements between the Allies concerning the postwar period angered the Allies. The Allied Powers refused to recognize the new Bolshevik Government and thus did not invite its representatives to the Peace Conference. The Allies also excluded the defeated Central Powers (Germany, Austria-Hungary, Turkey, and Bulgaria).

According to French and British wishes, the Treaty of Versailles subjected Germany to strict punitive measures. The Treaty required the new German Government to surrender approximately 10 percent of its prewar territory in Europe and all of its overseas possessions. It placed the harbor city of Danzig (now Gdansk) and the coal-rich Saarland under the administration of the League of Nations, and allowed France to exploit the economic resources of the Saarland until 1935. It limited the German Army and Navy in size, and allowed for the trial of Kaiser Wilhelm II and a number of other high-ranking German officials as war criminals. Under the terms of Article 231 of the Treaty, the Germans accepted responsibility for the war and the liability to pay financial reparations to the Allies. The Inter-Allied Commission determined the amount and presented its findings in 1921. The amount they determined was 132 billion gold Reichmarks, or 32 billion U.S. dollars, on top of the initial $5 billion payment demanded by the Treaty. Germans grew to resent the harsh conditions imposed by the Treaty of Versailles. 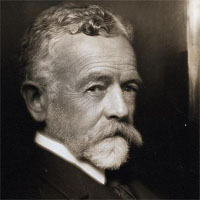 While the Treaty of Versailles did not satisfy all parties concerned, by the time President Woodrow Wilson returned to the United States in July 1919, U.S. public opinion overwhelmingly favored ratification of the Treaty, including the Covenant of the League of Nations. However, in spite of the fact that 32 state legislatures passed resolutions in favor of the Treaty, the U.S. Senate strongly opposed it.

Senate opposition cited Article 10 of the Treaty, which dealt with collective security and the League of Nations. This article, opponents argued, ceded the war powers of the U.S. Government to the League’s Council. The opposition came from two groups: the “Irreconcilables,” who refused to join the League of Nations under any circumstances, and “Reservationists,” led by Senate Foreign Relations Committee Chairman, Henry Cabot Lodge, who wanted amendments made before they would ratify the Treaty. While Chairman Lodge's attempt to pass amendments to the Treaty was unsuccessful in September, he did manage to attach 14 “reservations” to it in November. In a final vote on March 19, 1920, the Treaty of Versailles fell short of ratification by seven votes. Consequently, the U.S. Government signed the Treaty of Berlin on August 25, 1921. This separate peace treaty with Germany stipulated that the United States would enjoy all “rights, privileges, indemnities, reparations or advantages” conferred to it by the Treaty of Versailles, but left out any mention of the League of Nations, which the United States never joined.