The following report has been prepared at your request by the Joint Chiefs of Staff in accordance with the memorandum by the Executive Secretary, National Security Council, dated 29 October 1948.2

The following paragraphs of NSC 9/4 are particularly pertinent to this report:

The over-all organization developed by the Western Union is shown diagrammatically in Enclosure “A”.

At the invitation of the Permanent Commission, the U.S. Delegation, representing the Joint Chiefs of Staff, departed for London on 17 July 1948 to participate on a non-membership basis in the work of the Military Committee of the Five Powers. The detailed current organization of the Military Committee, which consists of the heads of delegations of each of the five Western Union Powers, is shown diagrammatically in Enclosure “B”.2

The three initial main tasks of the Military Committee were to draft, for the approval of the Western Union Chiefs of Staff, papers on the following subjects:

The Chief [Chiefs?] of Staff of the Five Powers met in London in August and agreed to recommend to the Ministers of Defense a Defense [Page 290] Organization, a Common Defense Policy, and a specific program for the development of an integrated air defense system. In September, the Defense Ministers met in Paris and agreed on the above recommendations. In addition, they approved the establishment of a Military Supply Board and recommended the establishment of a Finance Committee.

The basic objective of the Western Union Defense Policy is to convince Russia that war would not pay. However, if this policy fails and a major war should develop, the strategic concept envisages an immediate air offensive, a ground defense in Germany as far to the East as possible, an air defense of the countries of the western union, a defense of the Middle East and North Africa, the control of sea communications, and, finally, an offensive on land as early as possible.

In early October directives to the members of the Commanders in Chief Committee were agreed and issued by the Western Union Chiefs of Staff. Basically, this Committee was charged with the preparation of detailed operational plans for common action in the event of war. Although actual executive command of forces would not normally be exercised by members of the Committee in peacetime, these officers are to be prepared to assume operational control of such forces as may be made available for the defense of Western Europe by the Governments concerned. Rear headquarters of the Chairman will be established in London with all other headquarters located on the Continent. Staffs of all combined headquarters are being integrated and organized in order to meet an emergency, and to produce the necessary defense plans.

On 8 November 1948 Field Marshal Montgomery held a meeting with the Military Governors at Melle, Germany. In his report on this meeting, General Clay has indicated that general agreement was reached with regard to the relationships between the Commanders in Chief Committee and the Military Governors, both as regards current planning and liaison and actual operational control in the event of hostilities. To ensure necessary integration of plans General Clay contemplates assigning suitable liaison officers to participate informally in the work of the Commanders in Chief Committee. Additional study and collaboration is required to complete detailed arrangements [Page 291] and to clarify the responsibilities for operational control of U.S. forces in Europe in the event of hostilities.

In the meantime, the Military Committee has concerned itself with refinements in the strategic concept and command organization, while its service advisory committees have worked toward standardization of equipment, harmonization of procedures and consolidation of inventories of forces and resources. In view of the complexity of the problems involved in meeting the U.S. conditions (Paragraph 6, NSC 9/3) on over-all Western Union supplementary requirements (including a determination of world-wide commitments in areas other than Western Europe and an assessment by the Commanders in Chief Committee of forces required to implement coordinated defense plans), and the impossibility of completing these studies in time to enable them to be screened by the United States and a military aid program prepared for presentation to Congress, the Western Union Chiefs of Staff have approved an interim solution which calls for informing the U.S. Government of the following before the end of November:

a.
Steps taken to plan Western Europe defense with means now available.
b.
Progress made in standardization of equipment, coordination of production and pooling of resources.
c.
Their estimate of forces which they intend to maintain in the immediate future either in units or mobilizable during the first three months after M-Day.
d.
Extent to which they can equip these forces, consistent with their economic recovery programs, from present stocks, from new production without external economic aid, or from new production with economic aid.
e.
Extent of outside assistance needed.
f.
Extent to which this outside assistance might be obtained from other than the United States.

Although the probable over-all military aid requirements of the Western Union are not as yet subject to accurate estimation, every indication is that they may ultimately reach a magnitude comparable to the requirements of the European Recovery Plan.

Much remains to be done, and considerable time must elapse before the minimum requirements for the defense of Western Europe could be met, even with a substantial and long-range U.S. military aid program. Progress to date, however, is encouraging. Future progress should be much more rapid, now that basic decisions have been taken by the Five Powers at governmental level, and the responsibility for the preparation of operational plans has been given to the Commanders in Chief Committee.

The contribution of the U.S. Delegation to the developments indicated above has been considerable. In addition to the strong psychological stimulus which its presence has generated, the U.S. Delegation, [Page 292] through its active participation in all levels of committee discussions, has been able to insure that the work of the Military Committee progressed generally along lines most favorable to the security interests of the U.S.. Through the frequent reports of the U.S. Delegation the Joint Chiefs of Staff have found it possible to keep abreast of developments and to take action, in appropriate instances, to promote U.S. military interests.

It is contemplated that the Joint Chiefs of Staff will:

a.
Continue U.S. military participation in the Military Committee of the Five Powers on a non-membership basis.
b.
Appoint a U.S. representative to participate in the work of the Chiefs of Staff Committee on a similar basis and in general conformity with the terms of reference established for the U.S. Delegation with the Military Committee.
c.
Conduct a careful screening of the military requirements to be submitted by the Western Union under the interim plan.
d.
Clarify the current and future relationships between the Commanders in Chief Committee and the U.S. Military Commander in Germany and Austria.

Issues To Be Decided by United States Government Within Coming Weeks

For the Joint Chiefs of Staff:

Fleet Admiral, U.S. Navy,
Chief of Staff to the
Commander in Chief of the Armed Forces
[Page 293]

[The image of “Enclosure A” is reproduced below; the text is not available in digital form.] 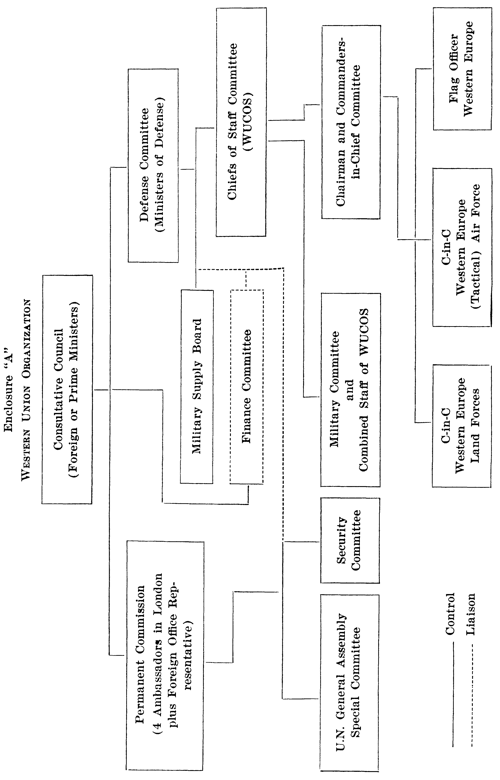