Foreign Relations of the United States, 1946, General; the United Nations, Volume I

Subject: Over-all Examination of Requirements for Transit Air Bases and Air Base Eights in Foreign Countries.

The Joint Chiefs of Staff request that the Secretary of State be informed as follows:

“In furtherance to the memorandum of 8 November 1945 from the State-War-Navy Coordinating Committee (SWNCC 38/25), the Joint Chiefs of Staff have reviewed the requirements for military rights of air transit and technical stop at locations other than those enumerated … and have determined that such rights should be obtained at the locations listed in Appendix ‘A’.

“Requirements for air transit rights in Canada have not been included, since the Joint Chiefs of Staff assume that such rights, among others, will be obtained in extension of present United States-Canadian agreements, or under satisfactory substitutes therefor, and have initiated action leading to a determination of such requirements by the Permanent Joint Board on Defense, Canada-United States.

“With the exception of air transit rights in Mexico and Central America necessary to provide air access to the Panama Canal, requirements for air transit rights in Latin America have been excluded also, as the Joint Chiefs of Staff assume that such rights will be obtained in implementation of the treaty expected to be concluded as a result of the declarations in the Act of Chapultepec. The Joint Chiefs of Staff have under study the determination of the military views on this matter.

“The airfields listed in Appendix ‘A’ are those which it is expected will be operated by commercial or foreign military interests. In the event that during negotiations it appears that any airfield specifically listed by name is to become non-operational and that some other airfield [Page 1143] in the vicinity is to be operated by commercial and/or foreign military agencies, it is requested that negotiations for that specific airfield be suspended and the Joint Chiefs of Staff be so advised in order that United States military requirements in the area may be further examined.

“Rights of air transit and technical stop, as used herein, are defined in Appendix ‘C’.

For the Joint Chiefs of Staff:

Locations at Which Military Air Transit Rights Are Desired 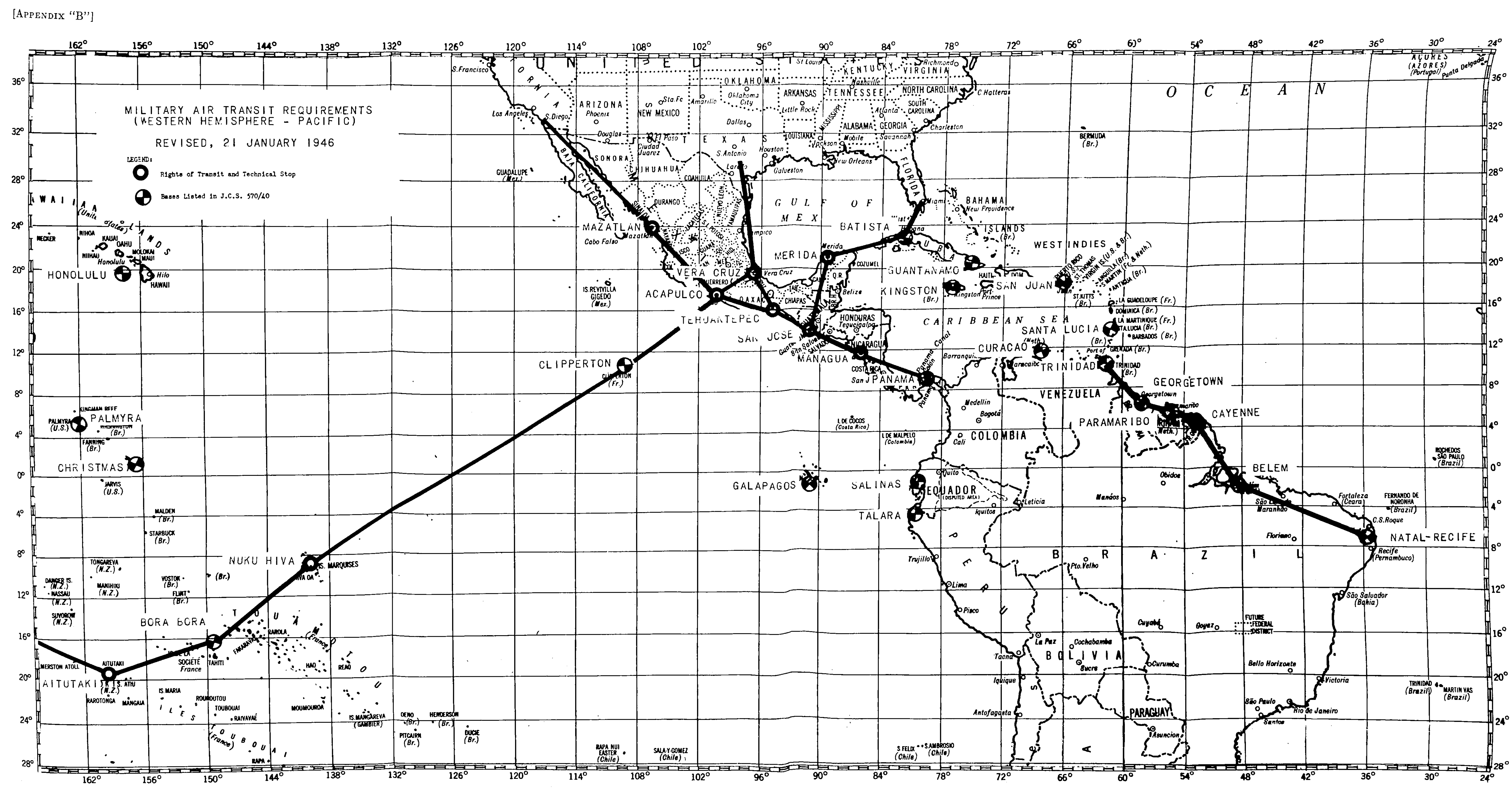 1.
The right of military air transit and technical stop is the long-term right to operate military aircraft into, over and away from a designated territory, and to land at one or more specific airfields or seaplane landing areas therein to refuel, effect repairs, or avoid unfavorable weather conditions, without restriction except as mutually agreed between the United States and the nation exercising sovereignty, mandate or trusteeship.
2.
In the exercise of the above right, the United States to have the following attendant rights:

a.
To install, maintain, and operate such aids to navigation, communications, and weather reporting facilities as may be required, subject to mutual agreement.
b.
To operate seaplane tenders, as required in the exercise of the rights accorded, in territorial waters in the vicinity of specified seaplane landing areas, such operations to include use of anchorage facilities in those waters by such vessels, without restriction except as mutually agreed.
c.
To import, station, store in, or remove from a designated airfield the minimum personnel, supplies, and materiel necessary for transit operations, free of customs, duties, taxes, and imposts of any kind.
d.
Exemption of United States official personnel, aircraft, supplies and equipment in transit, from customs, duties, taxes, imposts, and inspections other than those required for quarantine or similar purposes.
e.
To contract with persons, companies, or government agencies for services and supplies locally required.