NSC-68 and the Korean War

The events of 1949 made foreign policy the nation’s top priority. NATO became a working alliance, the United States provided military assistance to Europe, the Soviet Union detonated an atomic bomb, and the Mao Zedong’s communist party took control of mainland China. The Department of State ordered a complete review of American strategic and military policy, and, in April 1950, the Department sent a paper calling for a broad-based and reinvigorated containment policy toward the Soviet Union, directly to the President. The paper later became known as NSC-68. After the outbreak of fighting on the Korean peninsula, NSC-68 was accepted throughout the government as the foundation of American foreign policy. 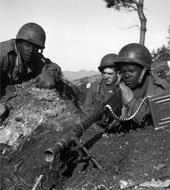 U.S. Soldiers during the Korean War

When North Korea invaded South Korea in June 1950, the United States sponsored a "police action"—a war in all but name—under the auspices of the United Nations. The Department of State coordinated U.S. strategic decisions with the other 16 countries contributing troops to the fighting. In addition, the Department worked closely with the government of Syngman Rhee, encouraging him to implement reform so that the UN claim of defending democracy in Korea would be accurate.

The Korean War was difficult to fight and unpopular domestically. In late 1951, the two sides bogged down on the 38th parallel, and the conflict seemed reminiscent of trench warfare in World War I. The American public tired of a war without victory, especially when negotiation stalled as well. The stalemate eroded Truman’s public support and helped to elect the Republican presidential candidate, popular military hero General Dwight D. Eisenhower, as the next President.