During the first 50 years of the nation, diplomats were guided by the idea that the United States should observe political isolation from European powers during peacetime and maintain strict neutrality during periods of war. Years before, Benjamin Franklin had summed up this point when he wrote: “A virgin state should preserve its virgin character and not go suitoring for alliances, but wait with decent dignity for the application of others.” 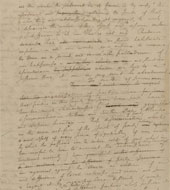 In his 1796 Farewell Address, President Washington argued: “The great rule of conduct for us in regard to foreign nations is to have with them as little political [as distinct from commercial] connection as possible.” Europe, he continued, had its own set of interests, and those interests were very different from those of the United States. Fortunately, the state of international relations tended to confer freedom of action upon the nation. “Why forego the advantages of so peculiar a situation? Why, by interweaving our destiny with that of any part of Europe, entangle our peace and prosperity in the toils of European ambition, rival-ship, interest, humor, or caprice?” Therefore, concluded Washington, "it is our true policy to steer clear of permanent alliances with any portion of the foreign world, so far, I mean, as we are now at liberty to do it.”

Although the political views of Thomas Jefferson were very different from those of Washington, Jefferson agreed that isolation and neutrality were the most beneficial course for the United States. In his First Inaugural Address (1801), Jefferson spoke of “Peace, commerce and honest friendship with all nations, entangling alliances with none.”